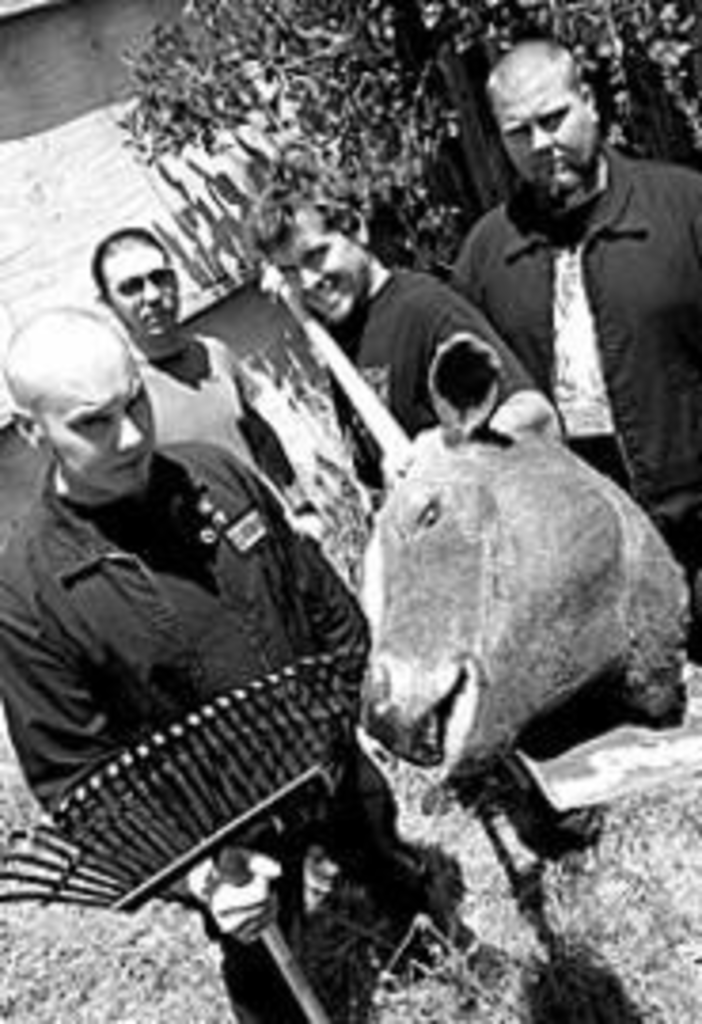 Given its vile lyrics (Human feces I season with morning eye crust and navel lint), outlandish onstage antics (singer Travis Ryan has regurgitated yogurt and donned a mask made of beef jerky) and unappetizing album art (Humanure looks like it sounds, only much, much worse), Cattle Decapitation seems like the type of band whose dinner-party invitations might “accidentally” end up in the trash.

But this gore-metal group can be trusted in the kitchen. It brings to mind the “Treehouse of Horror” episode in which the Simpsons discover that the aliens just wanted to fix them some food all along. Blow some dust off the band’s To Serve Man CD cover, and it reads “To Serve Veggie Meals for Man.”

Well, no. Actually, the title track says: Men, women and children shall be strung/Sliced from hands to feet/ Innards save for a tasty treat/And beaten profusely to tenderize the meat/Choice cuts from the slaughter/ Husband, mother, daughter/Dead families kept together/Their hides made into leather.

Like most of Cattle Decapitation’s material, vegetarianism is taken to anti-human extremes. Musically, the group travels to an equally remote side of the spectrum. All jackhammer jolts, bludgeoning breakdowns, treadmill-set-to-death drumbeats and straight-razor riffs, with robust rhythms that rattle rib cages and vocals that approximate projectile vomiting, the group’s choppy songs embrace the most brutal aspects of various virulent heavy-music subgenres.

Sharp satire, to be sure, but metaphorical meals don’t feed a touring band. Cattle Decapitation usually ends up scarfing down side salads from fast-food spots or graciously accepting cheese pizza from promoters for the seventh straight show.

“People always think everybody loves pizza,” guitarist Josh Elmore says. “I appreciate the effort, but at the same time, that’s all we ever get.”

Elmore can be a crafty chef (see sidebar), but life on the road provides few opportunities to prepare haute cuisine. Cattle Decapitation took Thanksgiving off this year, which meant Tofurkey at Elmore’s place.

With its emphasis on fowl slaughter and the stuffing of seasonings into a chest emptied of entrails, Thanksgiving is an apt holiday for most misanthropic metal bands. This is a genre whose godfather bit the head off a live bat, so compassion for lesser creatures isn’t exactly an intrinsic value. Like its veggie-gore predecessor Carcass, Cattle Decapitation fits in with its carnivorous counterparts by being every bit as gross. It’s like the lamb-of-God-in-wolf’s-clothing strategy employed by those Christian death-metal bands that sing about sadistic rituals in first-person to show what a bad guy Satan can be.

Often erroneously depicted as strident vegans (in fact, they eat dairy), Cattle Decapitation’s members steer clear of empty shock tactics and sloganeering. For example, the group has never resorted to hoary rallying cries such as “Burn the slaughterhouses to the ground,” which the pop-punk band Good Riddance once ordered with unconvincing urgency.

“I’ve never been into that kind of stuff,” Ryan says. “I always thought it was cheesy. I’m not out to change anybody’s eating habits. We’re not crazy, psycho activists.”

Cattle Decapitation ends Humanure with 9 minutes of unspeakably ominous noise from a slaughterhouse floor (courtesy of People for the Ethical Treatment of Animals). Like the most haunting horror films, it’s menacing because of what it leaves to the imagination. All the track reveals is an eerie industrial clamor, some sickly squishing and an occasional anguished yowl. But the mental picture it conjures is even worse than the group’s grotesque satirical scenarios.

Though it ends on a sobering note, Humanure isn’t without comic relief. Cattle Decapitation draws humor from its subject matter (the human-roadkill rant “Pedeadstrians”), wry wordplay (Trying to grab your gas mask/An uneasy task/ When your pubis is dismembered from your abdomen) and fluent ventures into office-speak (Your request for a pleasant death has been denied) and infomercialese (The human/So many uses/Once drained of its juices/ Perfect for home, boat or office).

But even more absurd than the group’s lyrics is the fact that many fans take them at face value.

“Some people actually think we have something against animals,” Ryan says. “Like, they’ll walk up to us and say, ‘Fuck yeah, decapitate them fuckin’ cows!'”

Although the group’s pitch-black wit is refreshing, its nonfiction conviction to its anti-human stance is even more compelling. Lurking behind the songs’ slasher-movie-style stage blood is Ryan’s belief that the world would be a harmonious utopia without humanity’s interference. Slipknot’s cosmetic nihilists use the slogan “People equal shit” to foster us-against-them camaraderie with their self-esteem-starved “maggot” fans. Ryan posits the same equation as the ultimate solution to Earth’s crisis. When people are nothing but fertilizer, a fate he believes to be inevitable, nature will reign.

“They’re trying to give the kids something to identify with,” Ryan says of Slipknot and its ilk. “I’m actively alienating everyone who walks around on two legs. My angle is more like ‘I hate you, and there’s nothing you can do to redeem yourself.'”

Heat the oil in a large saucepan. Sauté the onions and garlic until lightly browned. Add cumin, chili and coriander; sauté for one more minute. Add coconut milk, pumpkin and water, then bring to a boil. Lower heat and simmer gently for 10 to 15 minutes until the pumpkin is tender. Season with salt and pepper, then stir in the chopped cilantro. Serve hot with rice.