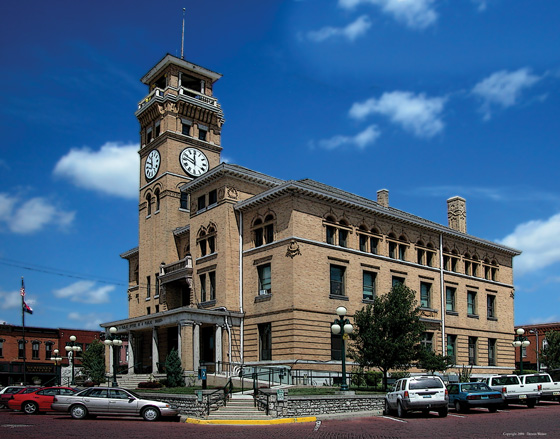 The historical Cass County Courthouse.// Courtesy of the Missouri Association of Counties

[Update 1/25/21 at 6:12 p.m.: The Chiefs have made a public announcement that no matter what, there will be no parade this year after Cass sorta forced their hand.]

Recently, Mayor Lucas said that a Chiefs Super Bowl celebration was highly unlikely due to the pandemic. Cases are still climbing and, as everyone knows by now, crowding in bars or along a parade route would likely cause a surge in cases that would further overwhelm our already stretched-thin medical centers.

Everyone seems to know this information, that is, except for the Cass County commissioners. In a letter sent to Mark Donovan, president of Arrowhead Stadium, the commissioners resolved to hold a Chiefs celebration in the county. The county—which is home to cities like Harrisonville, Belton, Pleasant Hill, Raymore, and Peculiar—notably does not have a mask mandate.

In each of the county’s largest cities, which have populations of 10,000-23,000, there are around 50 new cases every week. While Cass County numbers technically do not count as Kansas City cases, they do flood into Kansas City area hospitals when they need to be hospitalized for COVID-19. Rural cases like these have been a large part of overwhelming our metro-area hospitals.

My coworkers and I are tired of putting bodies in bags, but yeah go off Cass County. pic.twitter.com/3PRpELBFMI

In the letter, signed by the county commissioner and associate commissioners, the three men disagree with Mayor Lucas’ attempts to prevent cases from surging because of a large, city-wide gathering.

“While we share the mayor’s optimism for another Chiefs Super Bowl win, we do not support his preemptive cancelation,” the letter, addressed to Mark Donovan, said. “Now, therefore, be it resolved, that we the Cass County Commission do formally extend an invitation to the Kansas City Chiefs and the broader Chiefs family to celebrate a Chiefs Super Bowl LV win in Cass County, Missouri with a parade and all the pomp and circumstance benefitting the occasion.”

I grew up in Raymore, now work in healthcare, and am so incredibly embarrassed that Cass County thought this was going to be a good idea ….

Also who the hell would want to go to Cass County for a parade. There is nothing to see down there except Casey’s & water towers 🙄😒

The county commissioner is a vocal supporter of Gov. Parsons, and attended one of his rallies in October. Assistant commissioner Kisner, marched in multiple maskless parades while campaigning for his position in late 2020. Ryan Johnson, the other associate commissioner, is perhaps the most vocal about his contestations to COVID-19 precautions. He has been decrying COVID-19 restrictions as government overreach since he’s been in office and has shared articles on Facebook about the Biden/Harris administration being despots because of their willingness to prioritize public health.

It is clear that even if the Chiefs wanted to celebrate in a Super Bowl win in a city that’s 75 percent smaller than Kansas City, NFL precautions likely wouldn’t allow them to do so. Beyond that, hosting a large celebration in a county that sees COVID-19 precautions as an option would certainly not be a win for public health.

Huston and Kisner have yet to respond to The Pitch’s request for a comment. Johnson, however, still looks forward to a potential celebration.

“While Cass County and the majority of our citizens would be honored to participate in any safe, responsible, and family-friendly celebration on behalf of another Chiefs Super Bowl win, it is too early to discuss,” Ryan Johnson says. “Our letter to the Chiefs was an invitation-only and we would not expect to hear anything from them until after the game.”

It will always be too early to discuss hosting an unsafe, large-scale celebration in the middle of a pandemic, that’s for sure. As for if Ryan Johnson—the man who thinks making sure the public stays healthy is government overreach—actually believes it would be a safe and responsible celebration, it’s certainly not too early to tell.

Monarchs' reign to begin in May after COVID-19 hiatus