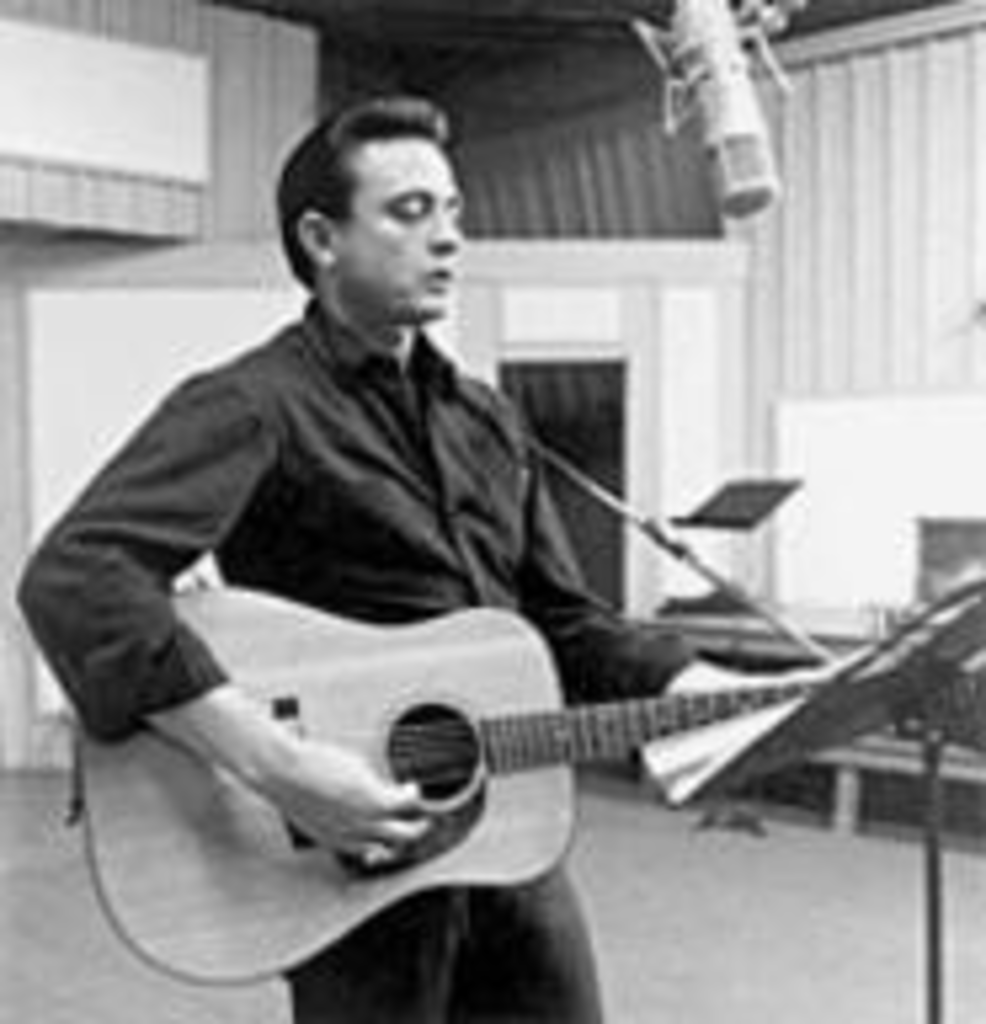 Striding the earth clad in black from head to boot, fists clenched and speaking in rumbling tones of love and God and murder, Johnny Cash can seem more a tall tale than a man. If he’d performed and recorded during the first half of the twentieth century, he might have achieved the status of folk hero, like Babe Ruth or Pretty Boy Floyd. Coming to prominence in an era dominated by electronic media, Cash instead became something more modern: His stentorian yet humble salutation (“Hello. I’m Johnny Cash”) and sartorial simplicity have made him an honest-to-God icon. His music and image will retain their currency well into the new century.

Cash turned seventy last week. Most folks his age have long since retired, but Cash keeps turning out amazing records. In the past five years, he’s released three albums, including the marvelous, heaven-bound country rock of 1996’s Unchained, as well as several reissues and collections of older material. And he’s done this even as his health has suffered a precipitous decline. In the late ’90s, Cash was told he had Shy Drager’s syndrome, a form of Parkinson’s disease, but his diagnosis has since been revised to autonomic neuropathy, a condition that has left him prone to pneumonia and has on more than one occasion nearly killed him.

Nearly killed him. Cash recently announced that he’s feeling stronger every day and that he still has a lot of living to do. “When death starts beating the door down,” he advises in 1997’s Cash: The Autobiography, “you need to be reaching for your shotgun.” His weapon of choice remains his music. To that end, Cash will soon release American IV, another in his series of collaborations with producer Rick Rubin; if his health continues to improve, he hopes to do some limited touring in support of the record. In the meantime, a number of events are planned to celebrate this milestone birthday — everything from last week’s “Cash Bash” on Country Music Television to the April publication of Ring of Fire: The Johnny Cash Reader to a tribute album due out in June that will include a track by old friend Bob Dylan. Most exciting of all, Columbia Records is reissuing five of his best early albums this month, with five more on the way this year.

Anticipating his final days, Cash writes in his autobiography: “I can feel the rhythms of the earth, the growing and the blooming and the fading and the dying, in my bones.” But listen again to his finest recordings — a musically compelling body of work, and one that conveys a world where something is at stake, not just emotionally but morally — and you know Cash has been channeling life’s vital rhythms for half a century.

Cash owes much of his visibility to timing. Though he is, in temperament and sensibility, a country artist to the core, he arrived on the scene through a brief window in the 1950s when his thumping country music could also be heard as rockabilly. That fortuitous entrance, coupled with an appreciation for rock songwriting and a well-publicized appetite for self-destruction, has made him one of the few country acts ever widely embraced by the rock audience: To date, only Cash, the Everly Brothers, Brenda Lee and Elvis Presley have been inducted as performers into both the country and rock and roll halls of fame.

Cash became a star at Sun Records in Memphis, but from the start he was of a different breed than Presley and Jerry Lee Lewis, the label’s other famous rockabillies. For one thing, he was older. By the time his first single (“Cry! Cry! Cry!”) cracked the country Top 20 at the end of 1955, Cash was nearly 24 years old, a grown man with a grown man’s responsibilities: He had already married, served a four-year military stint in Germany, worked in a Michigan auto plant, sold appliances door to door and become a father (of daughter Rosanne).

Along with memories of an Arkansas youth that included row after row of cotton and the death of a beloved older brother in a grisly lumberyard incident, Cash poured this full, adult life into his early songs — the most consistently thrilling work of his career. (Check out Rhino’s The Sun Years for a good single-disc introduction.) The steadfastness of “I Walk the Line” and the romantic fatalism of “There You Go,” the domestic comedy of “Mean-Eyed Cat” and the domestic tragedy of “Home of the Blues,” the Sweet Home Tennessee of “Hey Porter” and the class resentment of “Folsom Prison Blues” — this is rockabilly for people who have to get up and go to work in the morning.

And the kids could dig it, too. Thanks to the strange boogie-woogie guitar of Luther Perkins and the slapped bass of Marshall Grant (the incomparable Tennessee Two), these boom-chicking Sun sides provided Cash the rhythmic template he’s used ever since. And not just Cash. On “Big River,” he invents Bob Dylan’s phrasing (I met her accidentally in St. Pawwwl, Minnesota) while Perkins and Grant, augmented by the ferocious acoustic guitar of producer Jack Clement, lay down a rhythm so propulsive and visceral that country boys and roots rockers have been copying it for decades.

In 1958, Cash left Sun for Columbia Records and quickly cut his greatest album, The Fabulous Johnny Cash. Soon to be reissued, the album is a wide-ranging marvel. A sweet memory of mother calling her children to “Suppertime” shares space with the indelible morality tale “Don’t Take Your Guns to Town,” a 1959 crossover hit. Gripping narratives about broken-hearted troubadours and guitar pickers with wicked, wandering eyes rub shoulders with four gospel numbers, including a rousing rendition of Dorothy Love Coates’ “[I’ve Got Jesus and] That’s Enough.” Yet whether tragic or comic, sentimental or spiritual, what holds these numbers together is a sense that life arrives with joy, and with limits and loss, too. Recall the opening couplet to Cash’s woebegone B-side “I Still Miss Someone”: At my door the leaves are fallin’, the cold wild wind will come/Sweethearts walk by together, and I still miss someone. There’s a depth to these lines that’s typical of Cash’s best writing and of a country sensibility generally — an understanding not only that life comes with happiness and sorrow but also that the two walk hand in hand.

Cash’s next LP, The Hymns of Johnny Cash (another new reissue), was advertised as the one he came to Columbia to make; Sun Records’ head Sam Phillips had for years denied Cash’s desire to cut a gospel album. This is the part of Cash’s story that many rock-bred fans and critics want nothing to do with. The tortured Man in Black who one day would record — and experience — “The Cocaine Blues” is presumably more interesting than the contented Cash who penned a novel about Jesus titled The Man in White. But it’s the Christian Cash — the one who could write songs such as “Lead Me Father” and “It Was Jesus” even as he regularly stumbled in his faith — who provides his work with its gravity, its sense of moral consequence. Over and over, his music underscores that no gets out of this world alive.

It’s the contradictions, the messiness of it all, that has granted Cash’s story its fullness and vibrancy all along. He’s sung grim murder ballads such as “Delia’s Gone” and slung cornpone like the 1966 LP Everybody Loves a Nut. He protested the Vietnam War even as he palled around with Richard Nixon’s favorite preacher, Billy Graham. He has performed at prisons and starred in his own TV variety series, harmonized with Bob Dylan and Mother Maybelle, cut a series of Americana-themed folk albums (the first was Ride This Train, also reissued this month) and covered metallic rockers such as Soundgarden and Danzig.

It hasn’t always added up, and he’s never been above stretching the truth or flat-out fibbing to make his points. In his self-mythologizing 1971 hit “Man in Black,” for example, he explains that the reason he never wears bright colors on his back is in tribute to the poor and the beaten down. Actually, it was because black looked so cool, but that didn’t mean he wasn’t also telling a kind of truth. And if it all seemed like too much now and then, well, that was just a reminder of how little we sometimes expect of ourselves.

Listening again to “A Boy Named Sue,” we can hear that it isn’t only a novelty song. Hearing him sing, in his trembling baritone, flesh and blood needs flesh and blood, we recognize a passion for human connection. And instead of remarking how the Cash story seems larger than life, we can glimpse instead a life within reach of anyone who has the guts to live it. Cash’s music matters because it is so unmistakably in love with life.