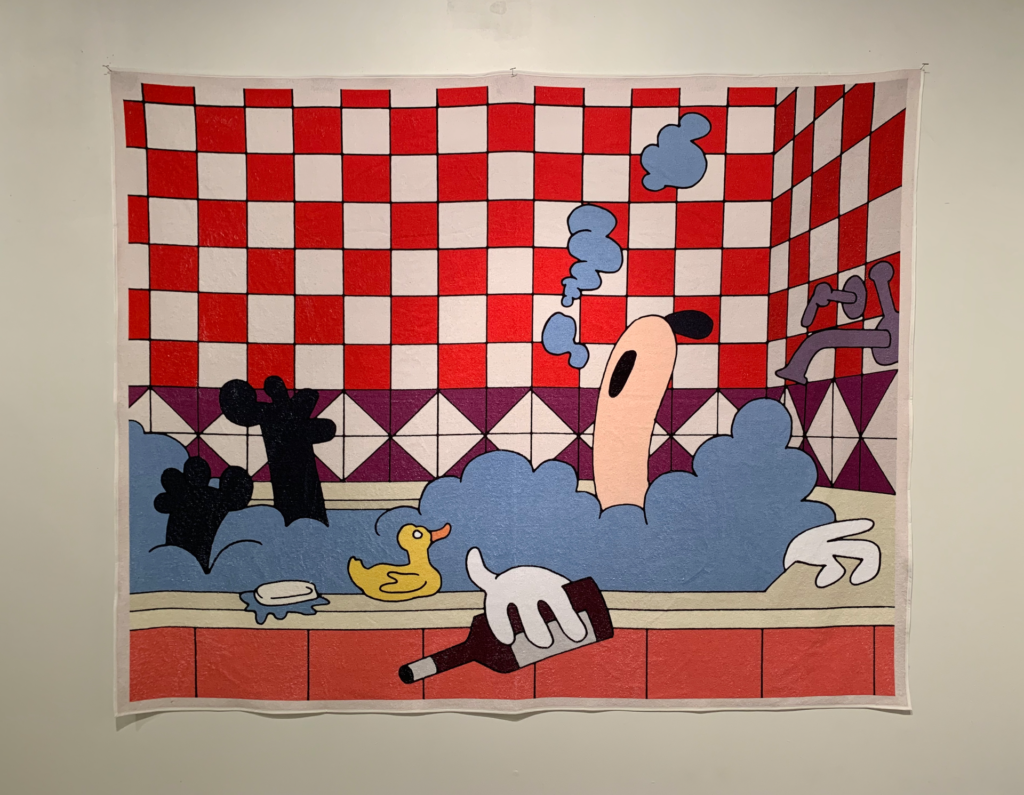 “An exhibition presented in Technicolor,” the wall text informs those who enter the current Vulpes Bastille show Cartoon Heaven, featuring works by Dan Ohm, Max Pond, and Stephen Proski. Here, across diverse styles and mediums, these three artists are engaging in a layered, thematically cohesive conversation — one studded with subtle influences from the animated world and familiar cartoon tropes. The printed exhibition guides end with a “That’s all folks!”

In the center of the gallery sits Proski’s life-sized painted tunnel of the kind Wile E. Coyote might smack into. The title, “It is the Curse of An Addict to Chase the Thing that Destroys You,” compels the viewer to map real-life adult questions onto an old cartoon intended for children:

Is Wile E. Coyote addicted to catching Road Runner, even if it destroys him?

Can Wile E. Coyote and Road Runner’s antics be read through the lens of addiction, of unhealthy obsession, of self-loathing?

In what ways do we make the same self-destructive choices, over and over, holding us back from our full growth or potential?

What could Wile E. Coyote do with his life if he wasn’t hellbent on catching Road Runner?

Perhaps these darker themes were always present in these cartoons — they were, after all, made by adults who were assuredly battling their own demons. Or maybe the cartoons’ familiarity simply makes them accessible figures to use to express artistic ideas. Either way, the result is a surprisingly potent foundation for reflection — on what reality we exist in, on the effect of popular media on our imaginations, on the darkness present in cartoon worlds, on the permeability of the bounds between high and low art. Whether those bounds even exists. 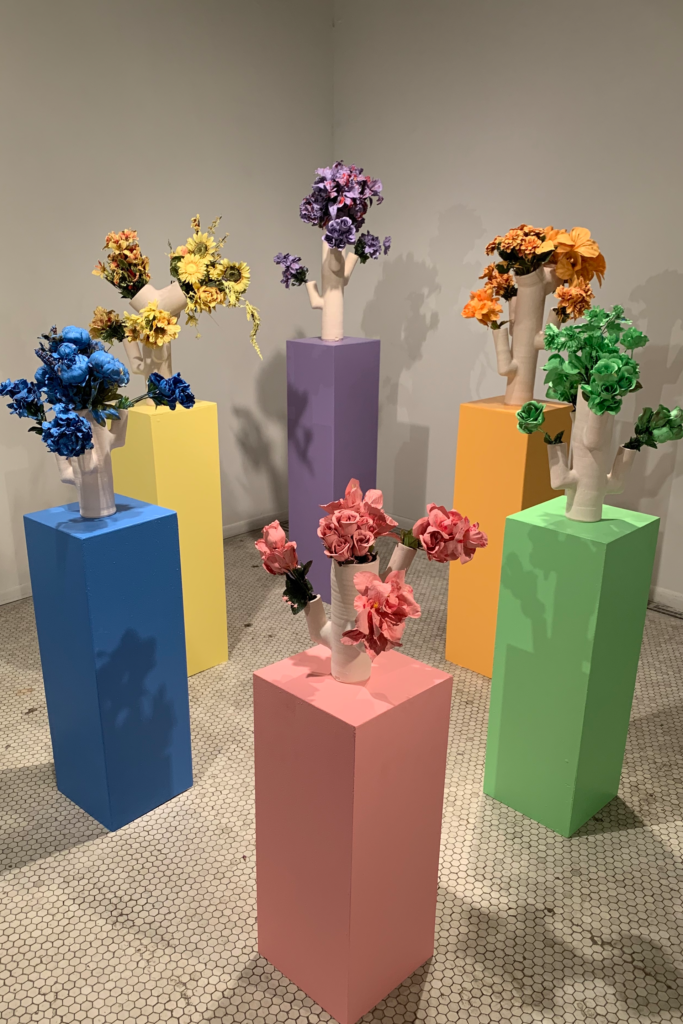 Ohm’s ceramic collections are like utilitarian vessels in an alternate dimension. They’d be quite at home in a Dr. Seuss book. A set of tall, white stoneware vases with cock-eyed arms and openings pointing at unexpected angles are filled with colored bouquets and set upon matching colored pedestals. The flowers are painted gloppily, imperfectly, in a way that is immediately reminiscent of Alice in Wonderland — an inspiration that’s referenced in the work’s title, “Painting the Roses Red.” In contrast to the ominous red of the Queen of Hearts’ threats of beheading, the colors here are friendly and softly saturated.

Ohm’s color palette compliments the color scheme of Pond’s abstract paintings on collaged canvas. Some shapes are like curved tunnels — think Super Mario Bros — and lines like mysterious glyphs, or oversimplified cartoon shadows. There’s a repeated visual language across these paintings of bold lines and friendly colors. The building block quality invites the imagination. Unlike abstract art that feels aggressively defensive against representation or interpretation, Pond’s works are playful and inviting, like deconstructed pieces of an animated world that you can reassemble to your liking.

As on display is a Pond creation called “The Bart Book,” a weird, ongoing, back-pocket art project in which Pond asks people to draw their own version of Bart Simpson. Bart appears throughout the show. Proski has a pixelated Bart running on a video loop, isolated, floating in space. Bart’s iconic zigzag head also appears in one of Proski’s pieces. 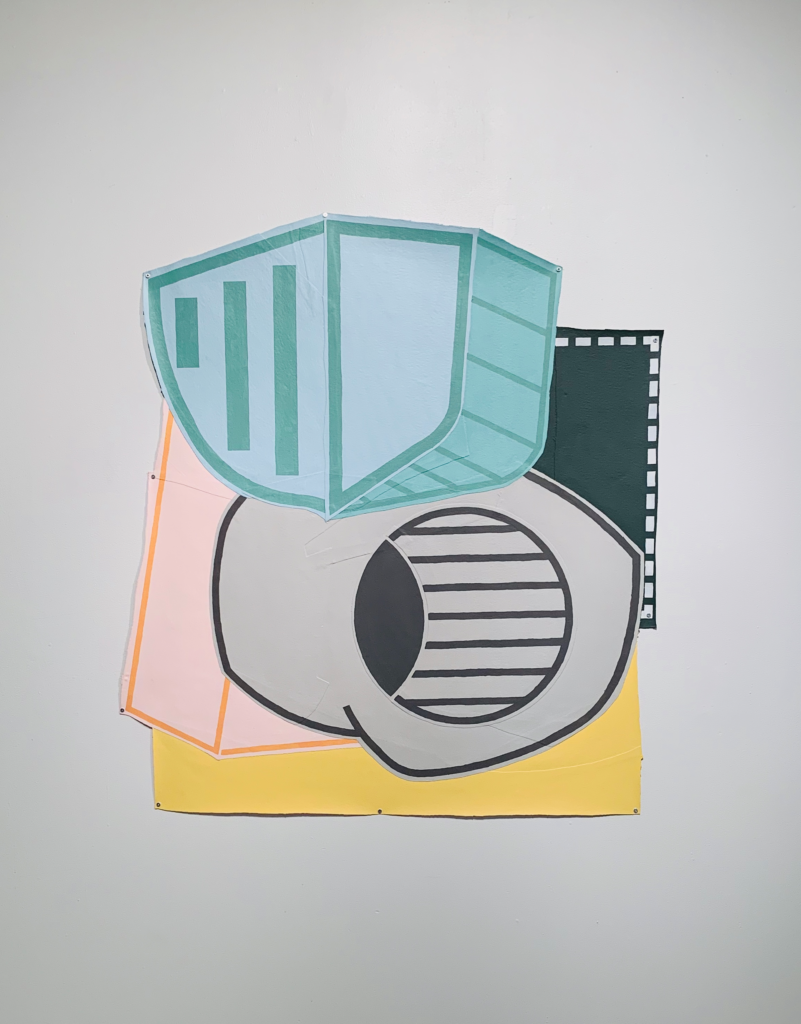 Proski has three bold, high-contrast works that combine oil painting and hand stitching on large canvases and use cartoon imagery to get at heavy themes. “Loot (Gimme That)” features cartoon bags of money — the kind a character would carry away after robbing a bank or a train. It could be interpreted as a tongue-in-cheek ode to money, the flowers in the background of the piece highlighting the absurdity of currency next to the natural world. “Disney’s Dream Debased” is a dismantled body of Mickey Mouse-gone-wild. In “The Killing Game,” cartoon references continue: boxing glove hands on spring loaded extensions, the zig-zag of Bart’s hairline, a cat watching a mouse. Symbols of debauchery like booze and dice appear as a kind of contrast to these symbols of childhood play and imagination.

Simultaneously thought-provoking and hilarious is Proski’s woven towel printed with cartoon-style Goofy submerged in a bubbly bathtub, only feet and snout visible, a hand over the side holding a bottle, as if Goofy passed out in the bath. The title is “The Bather (After Marat).” Marat here refers to The Death of Marat, a famous 1793 painting by Jacques-Louis David depicting French revolutionary leader Jean-Paul Marat murdered in his bathtub, hand draped over the side. This famous, high-art, European-master reference adds a brilliant and ironic touch to this work. The style, medium, and characters depicted couldn’t be more different. But connecting the two boldly asserts that the boundary between “low art” (cartoons) and “high art” (oil paintings) can be transgressed, that these forms are interrelated, that there is influence and confluence across forms. Cartoon Heaven bridges the gap between the cartoons we watched as children and the art we see in museums, creating satisfying play between the two.