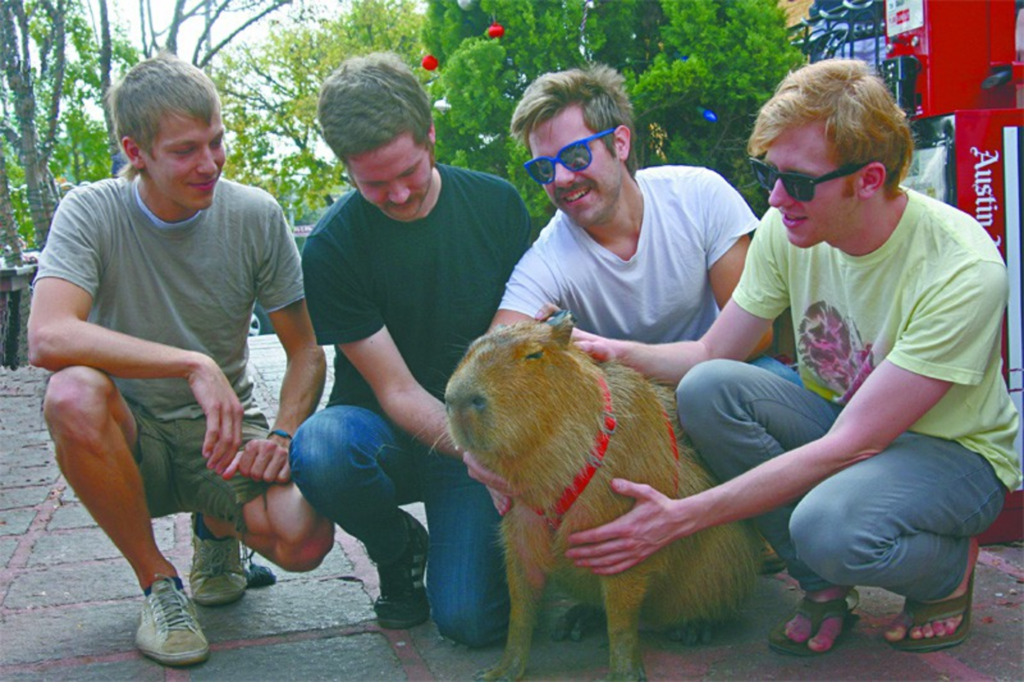 A new rodent is on the loose.

And so it’s fitting that in early 2009, band members Mark Harrison, Darin Seal, Joel Wrolstad and Jared Horne fled to the mountains of Taos, New Mexico, to record their debut album. Prior to quitting their jobs to focus on music, the Liberty, Missouri, natives were spread among New York City (Harrison), Portland, Oregon (Seal and Wrolstad) and Kansas City (Horne). In May, they all moved to Kansas City.

Released in September on the Record Machine, Try Brother is a collection of lighthearted indie-rock confections infused with bursts of crisp percussion, playful hoots and howls, and an undercurrent of euphoric childhood nostalgia. Trendsetters such as film director Spike Jonze have taken notice (a track appeared on a blog related to Where the Wild Things Are), so the band’s raw excitement and starry-eyed optimism are well-rooted.

Just before Thanksgiving, The Pitch caught up with the charming, stylishly coifed boys of Capybara in a midtown coffeehouse. They had spent the previous three months rollicking around the country in their van, “Martan Van Buren,” but their conversation was just as plucky, witty and bright as their music.

The Pitch: So how did you guys meet?

Horne: We went to high school together, in Liberty. Mark didn’t know me at all. In fact, he thought my name was Jordan.

Harrison: The only reason he thinks I called him Jordan was because I didn’t. [Laughs.]

Seal: The first time that Joel and I hung out, we went behind this silo on a farm and smashed the shit out of a computer.

Seal: There wasn’t as much rage involved.

When did you realize that you wanted to devote your life to music?

Horne: I think I decided a few months ago? [Laughs.] I studied music in college, and I thought for a long time that it was a waste of time, so I wasn’t really planning on trying to pursue music in a professional way. It took Capybara being set in motion to make me realize it’s something that I really want to do, even if it doesn’t make me any money at all. It’s what I’m best at.

Seal: Yeah. I’m not good at anything else.

Wrolstad: At a certain point, you just become most knowledgeable about it.

Harrison: I think there are so many things you can derive from pursuing music or art. It’s about picking up and going and not listening to what everybody says, because there’s a lot of foolishness in that. If you surround yourself with people that are just as talented, if not more talented, than you are, you’re making good progress.

Where did your van’s nickname come from?

Seal: The alternate name for the trailer was Jonathan Trailer Thomas, but we figured it was better to go with the 19th-century presidents theme.

Harrison: We’ve already been in Mar-tan Van Buren for 36,000 miles this year. We’ve had a deer hit us.

Seal: It was trying to kill us. It saw us as a predator.

Harrison: It’s actually credited on the jacket of our album as “the slow faun.”

What makes a great live show for you guys?

Harrison: People not putting their fingers in their ears.

Seal: Which we did have happen to us. It was a small space, and there were a few older gentlemen in their 50s or 60s. I looked out on the audience at one point, and both of them were looking right at me with their fingers in their ears.

Horne: One of them was reading a newspaper.

What would you say your most important influences are, apart from music?

Harrison: Working a full-time job for a couple of years in what you think is your dream situation, realizing it’s not and wanting to do something different. That is more than enough — enough of a reason to go through sitting in a van together for three months, which is a difficult thing to do, even with three of your closer friends. You just have to do something rather than just sit and expect things to come to you.

What are you trying to convey about your sound by describing it as sunmusic?

Harrison: We never wanted to just describe our music as sounding like another band, so we thought we’d describe it through a picture. In the past, we’ve described our music as “sitting in the back of your big sister’s car, listening even though you don’t know what music is playing, and watching the sun come through the trees.”

Seal: It’s based on an experience I’ve had. When you’re a certain age, you can’t have taste in art. My sister is eight years older than me, and I remember sitting in the backseat of her car, and I liked what was playing but I didn’t know how to talk about music or what I liked and didn’t like.

Horne: I think it’s something that’s continuous. Your tastes don’t ever settle. You’re always re-evaluating what you’re listening to or what you’re looking at.

Harrison: Thank goodness or I’d still be listening to 311 and Creed.