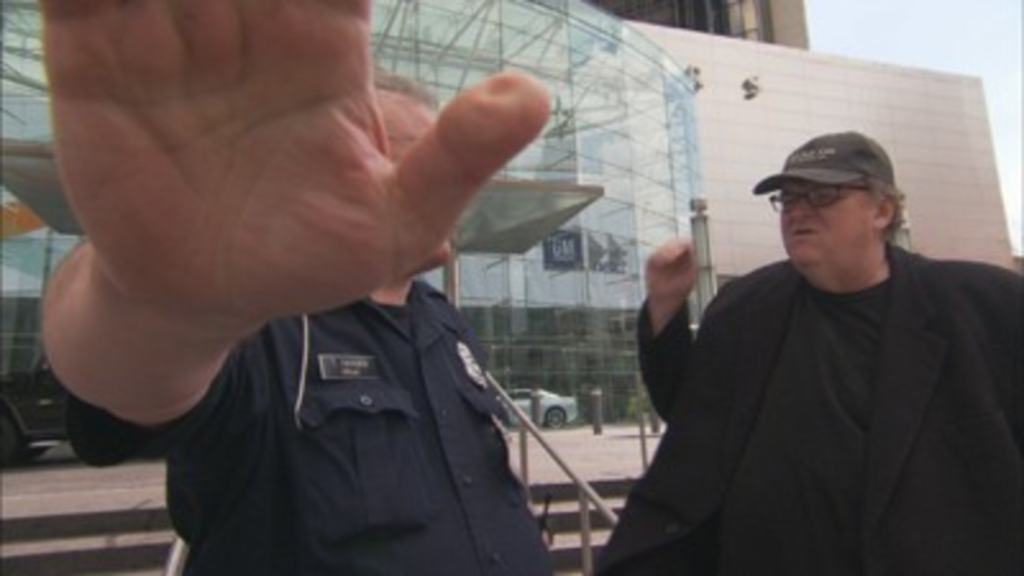 The ushers at a packed screening of Michael Moore’s latest movie, Capitalism: A Love Story, came proudly decked out in T-shirts bearing such slogans as “Make Love, Not Capitalism” and “Capitalism, We Have a Problem.” The shirts and the movie are brought to you by those filthy Reds: Overture Films — owned by John Malone, the Limbaugh-loving media magnate who was fined a hefty $1.4 million this summer by the Justice Department for illegal stock purchases.

Such are the contradictions, and I wish that more of them had made it into this scattershot, lazy slice of agitprop, which recycles Moore’s usual slice-and-dice job on corporations while bobbing a curtsy to the current crisis.

Less a movie than a traveling circus, Capitalism is cobbled together from the director’s usual toolbox of film clips, pseudo-triumphalist choral scores, potted labor history, and staged stunts with the director’s pals — in this case, a downright baffling shopping trip with a bemused Wallace Shawn to illustrate the oxymoronic doublespeak of the free market.

Moore is a skilled court jester, and there’s some bitter fun in the sight of a Harvard economist tying himself in knots trying to define a derivative or of Moore wrapping the perimeter of AIG headquarters in crime-scene yellow tape like some unhinged Christo. But if you’ve seen his other films, the footage feels like old hat.

Mostly, Capitalism is a point-by-point retread of Moore’s 1989 film Roger & Me, with Moore trying and failing once more to gain entry to the offices of General Motors. He notes, but doesn’t much pursue, the fact that the company is now bankrupt. Instead, he goes on pummeling the corporations and the legislators who sit in their laps. If Capitalism feels stale, it’s partly because Moore isn’t trying very hard.

If economic collapse has done anything to change Moore’s position, it has been to push him further — or, at least, more explicitly — to the left. Contrary to its strategically ambiguous title, whose irony is designed to make hip liberals nod their knowing heads without scaring off the hard right (as if they’d show up for anything with Michael Moore in the credits), Capitalism is the most purely Marxist film Moore has ever made. Its purpose is not just to go after corporations and their sidekicks in Congress but also to fully come out of the closet and acknowledge free enterprise as evil. Quite an admission from a man who, on this side of the Atlantic, never identifies himself as a socialist unless he’s talking to Canadians.

Predictably, Capitalism played well with Moore’s most loyal constituency. But will the lifelong Republicans and conservative Democrats whose lives have been shredded by the worst slump since the Great Depression show up? Unlikely, but if they do, they’ll see their daily plight writ large in the movie’s genuinely touching moments, unadorned by Moore’s cloying habit of milking pathos for every last drop.

We see Moore walking his elderly but still sharp father around the razed lot that was once the spark-plug factory where he worked all his life; visiting companies that are making a go out of profit sharing; and chatting with the sheriff who put an end to foreclosures in his town. Though there’s little here that we don’t already see on TV news, you’d have to have a heart of stone not to be moved by the victims of foreclosure and shady bank deals who allow the director into their shattered lives.

The last word goes to a gun owner whom we watch packing up his home and then, heartbreakingly, being paid a measly $1,000 to clean up the site by the very bank that foreclosed on him. “There’s the people that’s got it all and the people who don’t have nothing,” he says bitterly. Charlie Marx must be shouting “Toldja!” from his grave.