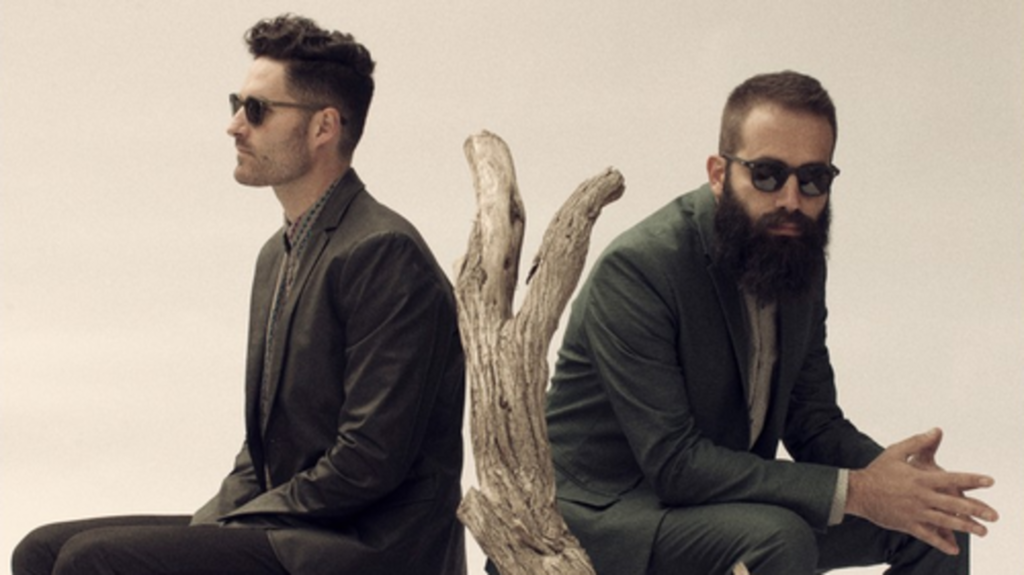 Doubtless you’ve heard “Safe and Sound” at some point over the past year, if not dozens of times – first when it spread like wildfire on the Internet and then when radio gobbled it up. It was the breakthrough hit from Ryan Merchant and Sebu Simonian, the duo behind L.A. electro-pop outfit Capital Cities. Since releasing their debut album In a Tidal Wave of Mystery in June 2013, the group has had a steady stream of success – thanks in no small part to the cheerful washes of synths and danceable live shows.

Ahead of the band’s headlining slot this Saturday at Boulevardia, we spoke to Merchant by phone about going from commercial jingle-writer to international rockstar.

The Pitch: We’re speaking just a few days after the one-year anniversary of the release of In a Tidal Wave of Mystery, your debut full-length. What has been the biggest adjustment you’ve faced since last June?

Ryan Merchant: I can tell you when you have a hit song that is a hit across the globe, your personal life goes out the door and it becomes all about work – which is great, because I love music and I love making music. We’ve done an excessive amount of performances – about 180 performances last year, and I counted all of them. This year we’re probably gonna do a similar amount. So it’s pretty chaotic, but somehow the human body adjusts to not sleeping much and not eating the greatest food. I’m just soaking up the experience.

You and Sebu first collaborated with commercial songwriting. Why did you want to break away from what was, I assume, a successful music career and try a different tack?

We’ve both independently been in bands since we were 15 years old, and we’re in our thirties now. Our original goal with music was to be in a rock band and travel the world, and at some point a couple years ago, we were trying to figure that out. I was looking for someone to produce some songs, and he had posted something on Craigslist, and we had this immediate musical chemistry that was obvious. Soon after that, I was doing an internship at a commercial music house that was doing ads, and I asked Sebu if he was interested in helping out, so it was kind of a detour. In that process, we started writing songs together, and we working them over a lot. We wanted to put “Safe and Sound” out, so we uploaded it online, and it blew up on the Internet and snowballed into what it is now.

What are some of the challenges of writing an album versus writing a commercial jingle?

There’s a lot of overlap between the two. Our career as commercial writers was instrumental in helping create the Capital Cities sound for a couple reasons… When you write for TV ads, you’re asked to write in a lot of different styles, and so we’d have to experiment. We wrote hip-hop and electronic tracks and that fused into our original style, and when you write for ads you end up becoming very prolific. You’re constantly getting calls – “We need a song, 30 seconds long, and it has to be catchy,” so we were constantly writing songs and melodies. Doing that for two years nonstop, you naturally get better at it. You learn how to write stuff that gets people’s attention.

We try to write stuff that has a little twist to it, that’s unexpected, so that people hear things that aren’t typical tricks. And also, to be honest, there was a lot of melodies and little musical snippets that we wrote for ads and that weren’t chosen, that we wanted to turn into a full song.

I hear a lot of different things on Wave of Mystery – some 1980s, some ’90s influence. There’s a lot of feel-good pop stuff happening on this record. What was important to you to include on this album as you were putting it together?

The songs on the album were all kind of written over the course of three years, and some of them had been reworked numerous times. “Safe and Sound” we worked on ten different times – we had ten different productions of it until we finally came across the production that it is now, where we used an analog synthesizer from the 1980s and we also made the decision to include the trumpet. That was the first song that formed the sonic foundation of our songs, and from there all the other tracks were formed.

So we’re fans of the analog synthesizer, and we’re both definitely children of the ’80s and heavily influenced by Depeche Mode, Madonna, Prince, Michael Jackson. But there’s also a lot of ’70s influence on our album, and Sebu and I both – sonically some of our favorite albums are from the ’80s, so we try to have a rich warm bass sound and then incorporate that warm disco sound. Basically, it was just this patchwork of songs that we had been working on that came together, and we just tried to write stuff that we liked and that was fun to perform.

Capital Cities plays at Boulevardia on Saturday, June 14, at 10 p.m. For details on Boulevardia, go here.