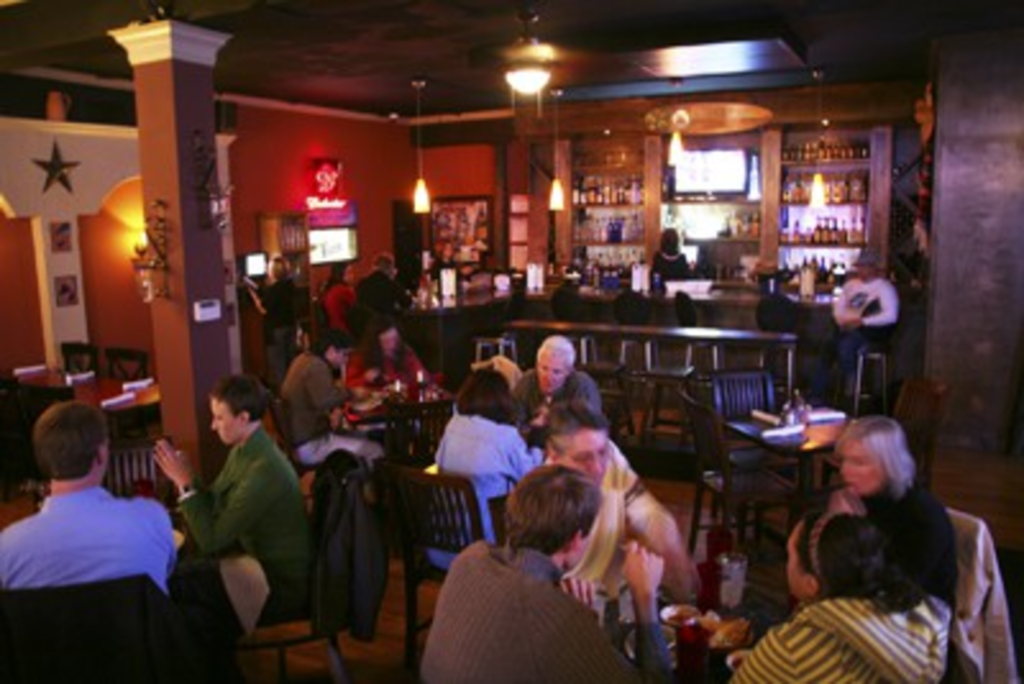 The classic neighborhood joint will probably thrive in this rough economy. Most people I know still go out to eat, but they’re downsizing their expectations — if not their appetites. If you can get a tasty and filling meal for 10 or 11 bucks, why not have a professional do the cooking?

Ray Dunlea and his wife, Molly, who serve hearty, traditional American and Irish dishes such as beef stew, potpie and chicken-fried steak at their Waldo pub The Gaf, opened a completely different kind of neighborhood joint this past summer. Just a few doors north of The Gaf, in the same spot where they had operated the intimate, snazzy Swizzle Martini & Wine Bistro for two years, Ray and Molly decided to serve the kind of food that’s popular in any season, any economic climate, for any kind of patron (from babies to bikers): Mexican!

The Dunleas turned Swizzle into Cantina del Ray. They didn’t repaint the clay-colored dining room or move the bar. Ray and Molly replaced the tables and chairs; installed a few new booths; hung some new curtains; and mounted neon Corona beer signs, a serape and a sombrero on the walls.

It would have been an excellent business move, even if diners weren’t suddenly watching their pennies as diligently as their 401(k) funds. This neighborhood needed a family-friendly cantina much more than a cozy boîte. And Cantina del Ray lives up to its promise. It’s laid-back, friendly, and remarkably tolerant of both squalling toddlers and screaming queens. (I’m not mentioning any names.) And the food is really good. And reasonably priced. Maybe not as inexpensive as some of the more beloved Southwest Boulevard joints but not cringe-inducing, either.

Even better, the servers don’t get all huffy if you’re so cheap that you order off the à la carte menu, as my friend Georgina did. She doesn’t bat an eyelash about dropping 20 bucks into a “Jade Monkey” at Harrah’s, but she’ll pore over menu prices as if they’re stock reports.

“Can I get a chile relleno à la carte?” she asked our server on the night she joined Bob, Truman and me at Cantina del Ray. “I’m not very hungry, and I don’t want all those rice and beans.”

Chile rellenos aren’t listed on the “sides and à la carte” part of the menu, but you can get a single meat- or cheese-filled relleno here. “I’ll have a taco, too,” Georgina said. “Really, I’m not very hungry.”

She then proceeded to eat most of the creamy, molten spinach-and-cheese espinaca sauce we had ordered to accompany the basket of crisp corn chips. “Isn’t this a darling little place?” she said, looking around the room. “The owner is from Australia.”

“Maybe he went to school in Australia,” she said as she dipped another chip in the cheese sauce. “I talked to him for quite a while before the rest of you got here.”

Ray, a broad-shouldered, hale and hearty restaurateur, was working the dining room like a diplomat. He stopped to talk to us. No, he explained, he was not from Australia and did not go to school there. More interesting, he added that unlike Swizzle, which took awhile to find an audience, Cantina del Ray was immediately successful.

“It’s going to thrive,” Truman said. “Everyone loves Mexican food.” He went on to opine that Italian, Mexican and Chinese foods have become so integrated into American culinary culture that they’re not even considered ethnic anymore.

The fare at Cantina del Ray isn’t totally Tex-Mex, although sophisticated palates might pause at the concept of Brookside Bean Nachos (refried beans, cheese and chips) or a Ward Parkway Pork Burrito.

The meal was starting off on an interesting note. In addition to the espinaca dip and chips, we nibbled on “standing cucumbers” — slices of peeled cuke, sliced lengthwise, marinated in jalapeño peppers and fresh lime juice, and served vertically in a water glass. “It’s like a Bloody Mary garnish,” Truman said, “without the Bloody Mary.”

I decided to try that Ward Parkway Pork Burrito because it sounded so unusual: chunked pork cooked in a pipian mole. I’ve eaten pipian mole several times, and the preparation has been pretty consistent: ground pumpkin seeds, cumin, chiles.

“We make ours with peanut butter,” the server bragged. And so they do. So much peanut butter, in fact, that I suggested changing the name from the Ward Parkway Pork Burrito to a Peter Pan Pipian Porker.

Bob had ordered one of the blandest items on the menu, the Mission Burrito — a basic bean-and-cheese number. I goaded him into spooning a little of the hot salsa on it. “It’s not brutal,” he decided. “It has character.”

After all that spicy stuff, we wanted something intensely sugary, so we shared a thick slab of chocolate cake for dessert — it wasn’t made in-house and was more frosting than cake, but I didn’t care. Another option, caramel-drizzled fried plantains, sounded a shade too exotic. And not nearly sweet enough.

Truman joined me again on my second trip to the Dunleas’ cantina. It was a weeknight, but the place was hopping. Our friend Franklin came along, too, but he said he was dieting — so he ordered nachos.

“They have salads,” I told him.

Truman ordered one of the house specialties, the Rio Grande Dinner with slow-cooked pork slathered in verde sauce. “It’s very good,” he said, “and spicy enough that it packs a wallop.” He decided that he was dieting, too, so he didn’t eat the tortillas that came with his dish … so I did. I had ordered the dish that our server had suggested: the tacos made with carne asada — marinated, grilled steak — tucked into flour tortillas with onion and cilantro. Delicious!

“Look at the people here,” Truman said. “A true cross-section of Kansas City. Black and white, rich and poor, young and old … “

In other words, a real neighborhood joint. The kind that feels built to last.