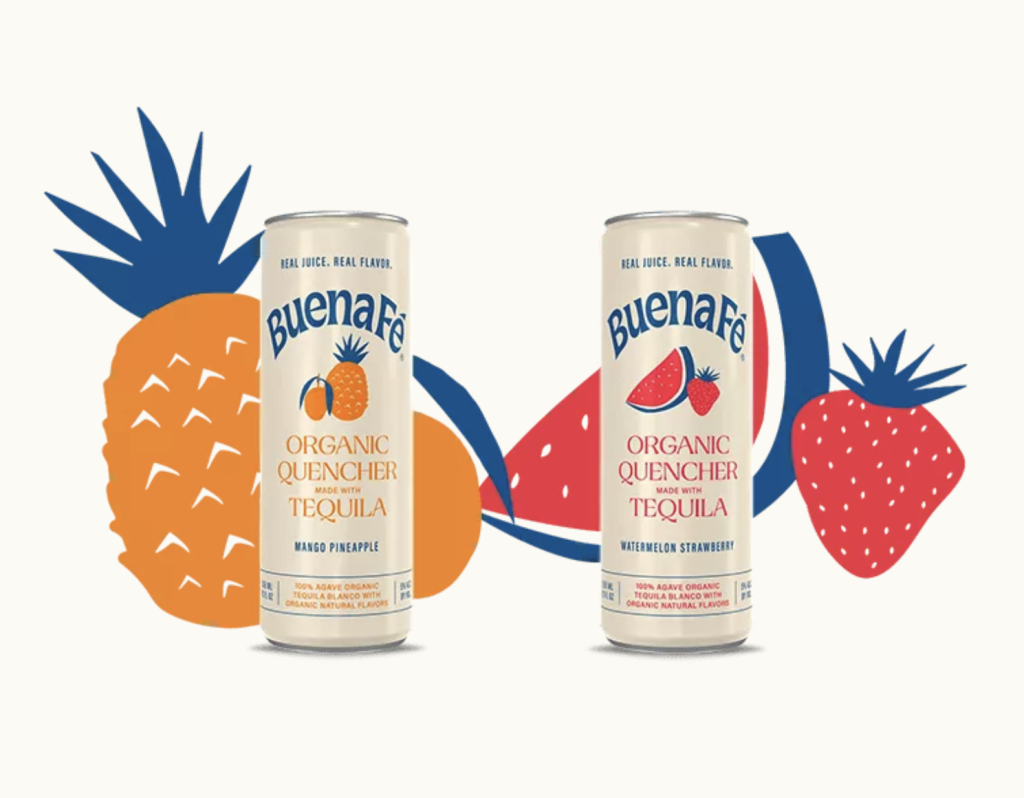 Buena Fe is a brand new product that made its late March debut in select states including Kansas. It’s not yet available in Missouri. It’s so new that when you google Buena Fe, the results show a series of Mexican restaurants and a Cuban pop band before the “organic quencher” appears on your screen.

So what is it?

Inside the tall, thin, 12oz cans are tequila, fruit juice, agave nectar, and soda water. Watermelon-Strawberry and Mango-Pineapple are the two flavors offered. The canned quenchers have 5% ABV and clock in at 136 and 140 calories.

Buena Fe is a proper start-up founded by New Yorkers Andrew Bushby and Patty Baer, who searched and tested for nearly a year before getting their product just right.

“Our mission is to create cocktails that are better for the consumer and better for the environment,” says Bushby. “We believe we have created the cleanest and tastiest tequila quencher in the world.”

Big talk from the new kid, but it’s tough out there in the hard seltzer game. So what makes Buena Fe special?

Buena Fe boasts that there is nothing artificial in their drinks. They even have a USDA Certified Organic badge. The packaging declares: “made from real tequila,” “triple distilled,” and “100% blue weber agave.” That’s all fine and good; I do, however, take issue with the following line:

No, it won’t. That’s not how alcohol works.

Concretely and biologically, alcohol is poison to humans. Please don’t mistake me for a teetotaler. I’ve put in my Malcolm Gladwell 10,000 hours working behind a bar. Alcohol’s intoxicating effect happens when you take in more booze than your body can metabolize. Saying your body will thank you for taking in poison along with organic juice is like saying it’s good for you to drink bleach so long as it’s in a kale smoothie.

Further, it’s a pure urban myth that tequila vs. any equally potent libation will give you a worse hangover. Two variables contribute to a hangover: the amount of intoxication and the hydration level. It may make you feel all warm and fuzzy to have a bevvy that’s organic with no additives, but in no way does it affect a hangover.

I smell marketing at work.

Tequila has a reputation (amongst gringos) for causing particularly rough mornings. Buena Fe’s marketing tries to convince you it’s the other tequilas that are bad for you.

Buena Fe makes a point of bashing mixto; they even sell “Death before Mixto!” t-shirts and hoodies on their website. Oddly the ratio of merchandise to flavor offerings is 8-1.

Taste-wise, 100% agave tequilas are generally better than mixto, but it makes no difference to your body chemistry. You’ll feel like the same bag of shit tomorrow whether you drink Cuervo or Patron.

There is no such thing as a healthy cocktail, no matter what the Buena Fe tells you. For the health-conscious, the tequila quencher compares poorly to typical light beer. A lowly Miller Lite has fewer calories, carbs, and sugar. Buena Fe is vegan-friendly and gluten-free, so that’s something.

Liquor mythology and marketing squabbles aside, Buena Fe is quite tasty. During a midweek afternoon, we at The Pitch sampled the tequila quenchers—because of journalism and science.

Here were the unprompted, immediate first-sip reactions of The Pitch staff:

Buena Fe tequila quenchers taste like they belong next to a lounge chair at the Jones Pool; crisp, sessionable, semi-sweet, and easy drinking.

The Watermelon-Strawberry’s “watermelon” flavor is subtle and slightly overpowered by strawberry, but that’s the nature of the two flavors. Mango-Pineapple is the brighter, more complex flavor, but both offerings are light and refreshing.

There is no citric acid present, which is ubiquitous in hard seltzers, so Buena Fe will seem less carbonated than others. Buena Fe uses agave nectar to add a hint of sweetness; it also gives the cocktail a roundness and near-silica mouthfeel that lingers.

If you already shop at Whole Foods, have at it. But if you are the no-laws-with-White-Claws type, you don’t give a shit about organics and will feel ripped off. Buena Fe is more than twice as expensive as Boulevard’s Quirk hard seltzer line, which is a touch high in the KC market.

If you are: vegan, gluten-free, financially comfortable, into hard seltzers made with real tequila and canned with USDA Certified Organic fruit juice… then buy a lottery ticket at the liquor store because the universe is speaking to you. You are seen.