Candidates for Ward 1 of Overland Park answer The Pitch’s survey on government transparency, equity, and the status quo 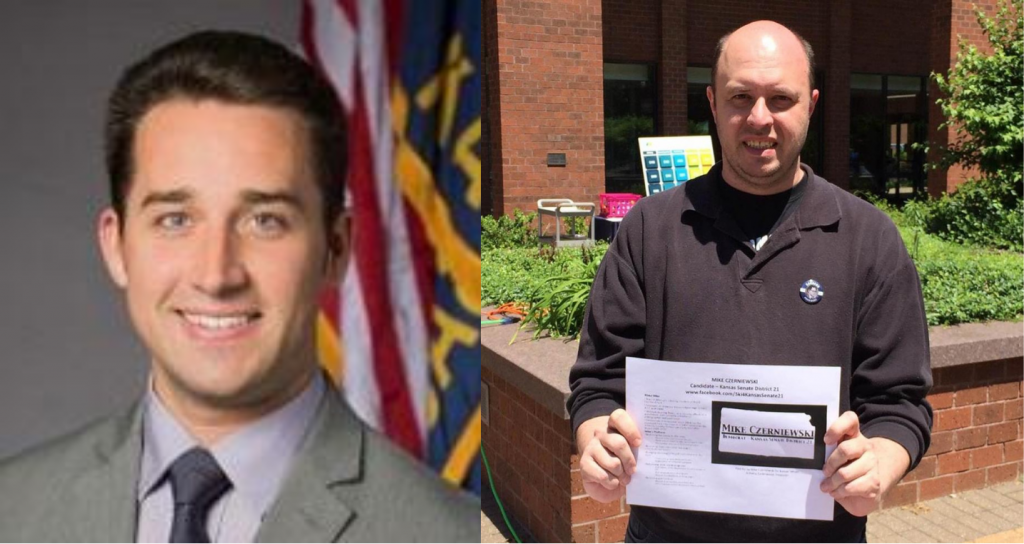 We asked the candidates running for Ward 1 in Overland Park’s August Primary election some hard-hitting questions. We wanted to determine their stances and commitments to improving equality and transparency issues, which have plagued the city’s current leadership. The candidates are Logan Heley, Michael Czerniewski, Ryan Spencer, and Carol Merritt.

I have had Heley and Czerniewski’s questionnaires for a while now. Spencer entered the race right before the registration deadline and never responded. Merritt called to say she would return the questionnaire, but during the conversation, some issues came to light that caused her to tell me that I was progressive and that she and I would “never agree.” What did I say that was so left-leaning, you wonder?

The following will help you determine who is committed to improving Overland Park, who is status quo, and who would potentially make Overland Park less equal and transparent.

The Pitch: Of which accomplishments are you most proud in your time of public service?

Logan Heley: Since being elected to the Overland Park City Council in 2017, Logan has led or co-led several important initiatives:

Michael Czerniewski: I have not yet served in public office.

What are your plans to implement a more transparent Overland Park following the Albers MORE2 Press Conference?

Logan Heley: All residents and community members need to know they can trust our justice system. Alleged officer misconduct should be investigated independently and violators must be held accountable. I’m proud to be in constant contact with local social justice leaders on how we can make our city’s system better.

Michael Czerniewski: I have not had a chance to read the letter, but I do agree that city government (and government at every level, actually) needs to be more transparent. I am open to ideas as to how to go about doing that.

Please finish this sentence: “I am more qualified for this role than the others running because…”:

Logan Heley: I’m running for re-election to the Overland Park City Council to ensure we continue the long, hard work towards a more sustainable, healthy, and just community. I’m experienced yet innovative and willing to listen, and always working for YOU—our community that I’ve loved and called home since I was a kid.

Michael Czerniewski: In the case of my race, I feel that the incumbent has proven that he’ll willfully ignore and/or talk down to his constituents if it conflicts with the wishes and deep pockets of developers. I want to get the influence of money out of politics and, unlike the incumbent, will actively listen to the concerns of the citizens before making any decision that will affect their lives.

Logan Heley: Our city has an Independent Citizen Advisory Board for Racial Profiling and Non-Biased Policing. I am working with that Board’s chair and local social justice leaders on how we can strengthen and improve that board and our processes to ensure we have justice in policing and in our community.

Michael Czerniewski: I wish I had a good answer to this question. It is a real problem and needs to be addressed.

How have you voted prior and how would you vote on establishing a demographically representative Community Police Review Board to reestablish the community trust Monday’s City letter spoke of?

Logan Heley: We need a system that the community trusts. If we can find a way to take the investigatory role outside of law enforcement, I believe that would be best for community trust. Our city has an Independent Citizen Advisory Board for Racial Profiling and Non-Biased Policing. I am working with that Board’s chair and local social justice leaders on how we can strengthen and improve that board and our processes to ensure we have justice in policing and in our community.

Michael Czerniewski: I would vote in favor of such a representative.

Is it your goal to serve in Overland Park only, or do you see yourself running for state and national posts?

Logan Heley: Have you seen what’s been going on in Topeka and D.C. lately?! We need good people to run for office at all levels of our government. However, I enjoy my work on the Overland Park City Council and am glad to be running for re-election.

Michael Czerniewski: I have run for state office before (State Senate), but do not see myself doing so again.

Logan Heley: I do not have any official endorsements at this time for this year’s election. In my last election in 2017, I was endorsed by former State Rep. Nancy Lusk, former Overland Park Councilmember Jay Lehnertz, former State Rep. Sue Storm, and the Mainstream Coalition.

Please finish this sentence: “What Overland Park needs most is… and I can make that happen by…”

Logan Heley: What Overland Park needs most is to figure out our housing affordability challenges, reckon with our community’s past and current systemic racism, and do our part in the fight against global warming. I can make that happen by being re-elected along with other candidates who will ensure we continue the long, hard work towards a more sustainable, healthy, and just community.

Michael Czerniewski: In the part of Overland Park I am running, there is a real debate on balancing history with progress. While I am okay with mini-highrises going up in Downtown Overland Park, I also would seek to preserve the more historically significant aspects of our Downtown—and not sacrifice all of it to the will of developers. I would also find ways to better integrate our city with the rest of the Kansas City metropolitan area—including but not limited to improved transit and affordable housing options. Lastly, as previously stated, I would actually listen to the citizens before making any votes that will affect their lives.

What is your stance on the common criticism that Overland Park avails more to corporate than its citizens’ interests?

Logan Heley: I prioritize sustainable development and infrastructure that makes our neighborhoods healthier, safer, and more affordable. I’ll continue to ensure tax and incentive policies are focused on YOU—community benefits, not wealthy developers

Michael Czerniewski: This is a valid criticism that I wholeheartedly agree with. To use the area I’m running in as a perfect example: there was no need to redo the former Santa Fe Commons Park in Downtown, yet they re-did the park anyway despite very strong objections. Another more personal example is happening right now right next to my house – the first of about four houses that the neighbors did not want built in a formerly empty field is nearing completion. Not only was my neighborhood’s petition ignored, we as a neighborhood were talked down to. Enough is enough.

Candidates for Ward 2 of Overland Park answer The Pitch's survey on government transparency, equity, and the status quo