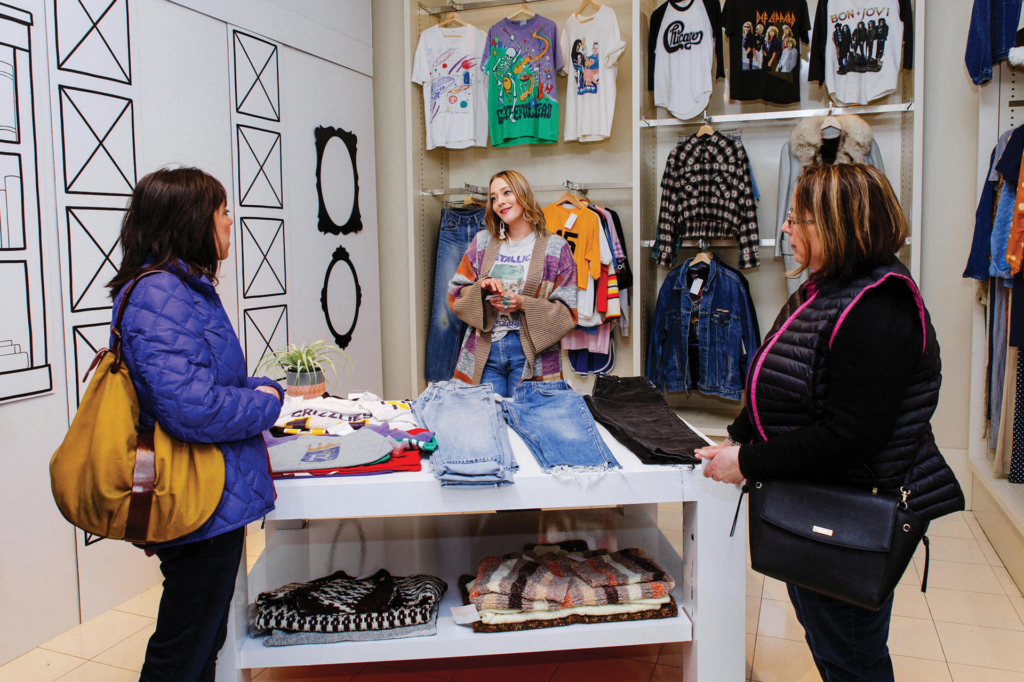 “Welcome to my little shop,” Tara Fay says, from behind a booth inside an Oak Park Mall storefront. Wearing royal blue heels, high-waisted jeans, and a vintage Metallica tee that shows off an array of colorful tattoos, Fay’s busying herself sorting thrift finds she snagged in Omaha the previous evening. She somehow seems right at home here in this suburban mall, where she recently opened her clothing company, Peaches Vintage Collective, inside Boutique in a Box, a space for high-end, local retailers.

The Oak Park location is Fay’s third for Peaches, with the other two at River Market Antiques and Bella Patina in the West Bottoms. She started selling vintage about a year ago, largely pulling items from her own closet. With a retail background including a stint at Buffalo Exchange, Fay says seeing her business grow has been a “dream come true.” She’s also an expert stylist, so if you love that black blazer adorned with multicolored race cars but aren’t sure how the hell to pull it off, she can offer pointers.

Fay’s personal style and enthusiasm are bringing sorely needed energy to the mall at a time when online shops threaten its retail model. (The owners of Independence Center, for example, recently defaulted on a $200 million loan.) In a hope to turn the tide, Oak Park is drawing on local makers.

According to Troy VanHorn, owner of Local Legend, which specializes in vintage men’s clothing, Boutique in a Box draws people to the mall who wouldn’t normally come there. VanHorn got involved with the project early on, and his company has helped round up new vendors and played a major role in its early success. So has social media.

“Kansas City is very locally driven, and Oak Park Mall knows they need to hit the local market,” VanHorn says, adding that with all of the Boutique in a Box vendors’ social media followers combined, roughly 50,000 people have heard about their move to the mall.

So far, so good for Fay. Her curated collection — classic band tees, leather jackets, kimonos, sparkly dresses, and even the occasional Royals shirt —is attracting a new audience out here in the burbs. As the mall’s only vintage vendors, she and VanHorn are both excited to introduce a new generation to recycled styles. Strangely enough, Oak Park Mall — arguably a vintage institution in the year 2018 — is beginning to seem like the right place for such discoveries to take place.