Cameron Esposito will be at the Midland on Thursday 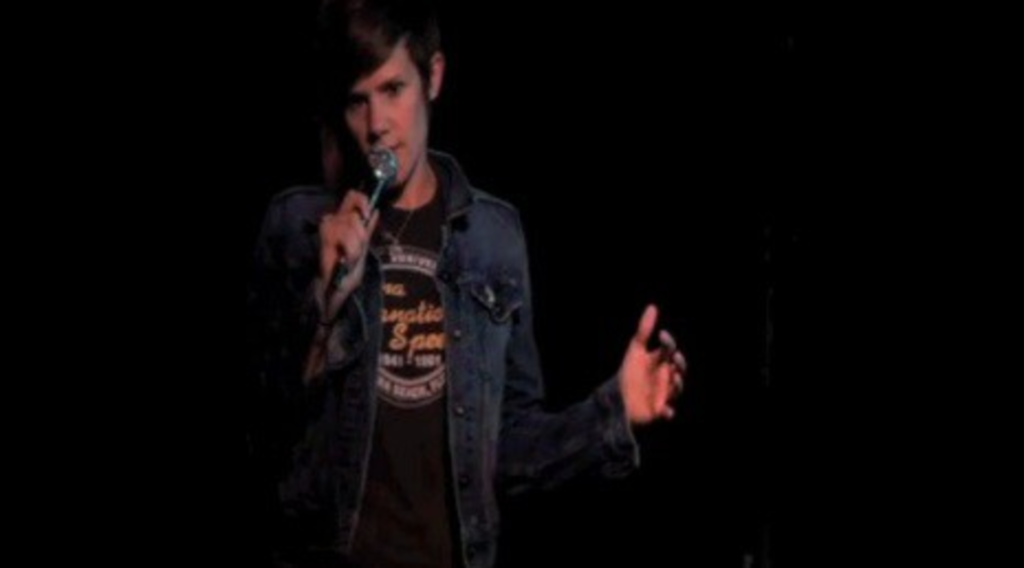 Cameron Esposito is a talented comic who – thanks to a combination of her own natural gifts and a lucky slot on the Late Late Show with Craig Ferguson and Jay Leno – is currently taking over the Internet.

The Chicago-born, L.A.-based Esposito has a routine that draws heavily from her personal life as a lesbian, and she often finds that rare and wonderful balance of truth meeting humor. Esposito is also the mastermind behind Put Your Hands Together, a successful weekly podcast that functions like a live comedy show. Her Tumblr blog is at turns hilarious and poignant – the story of her father’s response to the DOMA repeal was particularly touching.

Esposito is currently on tour opening for Anthony Jeselnik, but given the current run of things, it doesn’t seem as though she will be playing second fiddle for much longer. Ahead of her gig at the Midland Thursday, September 26, The Pitch caught up with Esposito via e-mail.

The Pitch: I first noticed you because of Underground Communique’s Standup Mixtape series. Is there any chance we’ll ever see more of these, or has Put Your Hands Together taken its place?

Esposito: Chicago’s DYI [sic] attitude made it a perfect home for Standup Mixtape. A series of cassette tapes created from shows put on in a recording studio in front of a 20 person crowd? I loved doing it and Underground Communique made us some awesome tapes. Put Your Hands Together hasn’t taken its place – it’s just based in Los Angeles, because I am now, too – and it’s a format that works better for Los Angeles’ very podcast driven alt standup scene.

When did Put Your Hands Together come about?

I sat down for lunch with my co-producer, Ryan McManemin, about a year ago, right after moving to L.A., and pitched him the idea for a standup podcast recorded at a live show. He’d been mulling over a similar concept for years. We immediately hit it off and went to the UCB with the idea. It just so happened, we were the first pitch for a standup show as the legendary Comedy Bang Bang decided to close up shop. We took over Tuesdays at 8 PM – right after Doug Loves Movies – in January and have been rolling ever since.

What was the impetus to move from Chicago to Los Angeles?

Industry support. Chicago is a great place to come up as a comic – tons of solid stage time, supportive community, huge arts scene. When a comic gets to the point that they want to be working in TV and film, a move away from Chicago to New York or Los Angeles is usually necessary to get writing jobs,TV spots, and national exposure. It’s a really organic thing.

You recently made your television debut, and got heckled by both Craig Ferguson and Jay Leno. You handled it with aplomb, by the way. What was that experience like?

It was completely amazing. I don’t really consider it heckling – I had a back and forth conversation with two late night hosts and legendary comics during my set on my network TV debut. I’m not sure that’s ever happened before.

Your Tumblr has become a place where you take on some tough topics. How do you decide what gets addressed?

There are just certain moments or topics that come up that I want to talk out, and recently, I’ve been talking these things out not just on stage, but via the ole internet. I have found that the more personal and vulnerable my writing is, the more folks are into it. I’m really happy with the response I’ve got with bloggin’ around lately.

Are there specific issues to which you find yourself drawn regularly?

Opening for Anthony Jeselnik, and given his onstage persona, do you feel that you’ll have to work harder to overcome what will likely be quite a few knuckleheads in the crowd?

Anthony’s audiences aren’t gonna expect me as his opener – we are opposite comics, if that’s a thing. That could mean I’ll have to work harder or it could mean that I shock them right into joy. WE SHALL SEEEEEE.

Is this your first trip to Kansas City, or did I totally blow a chance to see you somewhere less huge?

First time! I hear you have barbeque or something? Don’t let me down, KC.

Cameron Esposito will be joining Anthony Jeselnik at the Midland on Thursday, September 26. Ticket info here.