Cage the Elephant’s Matt Schultz: I’m on a quest to be independent of my desires 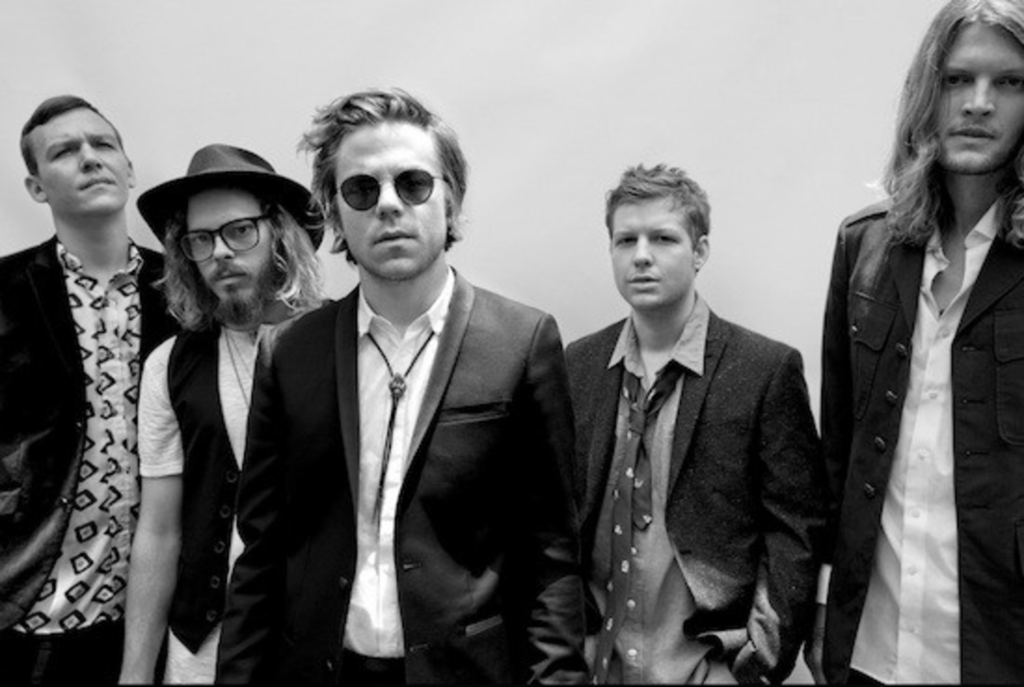 The Buzz Beach Ball on Friday drew an incredibly large crowd – a bit too large, really, if we’re being honest, given the hourlong traffic negotiation to get from downtown to Berkley Riverfront Park (normally just a seven-minute commute) and the horrifyingly congested parking situation. Still, there is hardly a more picturesque location for a music festival, and the lineup curated by 96.5 the Buzz would make a solid night of entertainment even for the casual music listener.

My mission for the night was to get a curbside interview with Kentucky indie-rockers Cage the Elephant, which was playing the middle set on the main stage. I’ve been a passive fan for a while – I enjoyed the band’s debut album a lot more than its follow-up, but I admired the group for breaking the mold and trying new things. The band’s new single, “Come a Little Closer,” off its upcoming third album, Melophobia (due out October 8), sounds energetic and promising.

The interview with Cage the Elephant had taken some coordinating, but nothing was more complicated than actually getting into the festival. As the Cage manager shuffled me past some flint-eyed security guards, I cursed my impractically heeled footwear and breezy skirt; I was certainly not dressed for a festival walking tour. I was introduced to Cage the Elephant’s lead singer Matt Schultz, who is the band’s enigmatic main brain.

In person, Schultz is sweet-faced with a slight build. He asked if we could sit for the interview on the hillside by the river, and as we plopped down on the crunchy grass (perilously close to a small ant colony), I couldn’t help but notice the way his faux-leather pants pulled up to reveal some daring leopard-print socks. This kid was so endearing, and we hadn’t even started talking.

The Pitch: Let’s talk about the new album for a moment. What does Melophobia sound like?

Schultz: There’s a lot of different colors and tones and textures. There’s some pretty intimate material and then there’s some super visceral, playful stuff. I don’t know if there’s any one particular sound other than the common fiber that just connect all our material, which is just… whatever that is. There’s some stuff that’s very energetic and just really fun to play, and it’s about capturing that live feeling in there. It’s more subtle and intimate.

“Melophobia” literally means “fear of music.” What do you mean by that title? Are you trying to tell listeners something?

It’s not so much about of an actual of music, more like a fear of creating music under false pretenses. Or like creating music out of a premeditated image that you might want to project instead of a genuine thought or feeling. Trying to be commercial or artistic or poetic or intellectual, like trying to project those images instead of just being an honest communicator and deliver songs from your heart. There’s a lot of pools – external and internal – to cater towards cool images rather than just to be a good communicator, so I’m trying to stay away from that.

“Come a Little Closer” is a great song, but it doesn’t sound like anything that would have fit on your previous album.

As time passes, hopefully you’re learning new things every day that you can apply to your creative process. It’s my hope that we can always evolve and are always discovering new things. And also, the more that we are able to push this fear back – because I think it was a huge discovery for us, a revelation for us, that fear can direct your creative works. It can totally dig its claws in and pull you into a place that… it can cause you to make decisions that aren’t based on trying to communicate a thought or a feeling or whatever.

There were some things that came to light for me [with this album] that I realized were hindering our ability to write and push forward, and I’ve always been the type of person that wanted to find our musical feeling, that uniqueness that was only ours, and I think to do that you really have to stop looking for it. In the human struggle, it’s all about projecting images, of confidence or whatever. So I think more often than not we look for things that society as a whole has deemed acceptable, and so we do that rather than speak from honesty. Even in conversation, I’ll catch myself – someone will just start to say something, and I don’t even have the slightest clue of what the actual point to what they’re about to say is – but I’m already agreeing with them. Nodding my head. And that’s false, that’s a lie, basically.

I hope that I’m not a product of the album, I hope the album is a product of me. So I think the things that we learn along the way are definitely finding a way to impact us.

I think that when you start to try to be artistic or poetic, you kill everything that’s beautiful about expression and communication, because when you come down to it, art is communication. It’s a communal thing, you know? When there’s a painting or a piece of music, it was done for the good of the body, not the individual. It’s a thing to share, to have that connection, and so whether it’s a circle of people around a fire beating on drums, or it’s a man in the 16th century composing pieces to be performed for an orchestra, it was all something for the collective.

When I was writing [the album], I was so limited by what I felt I was projecting. Specific words that are deemed to sound intellectual or artistic, or like, “This is beautiful, so use these words.” “Illustrate with them, and you’ll look cool.” I was limiting myself. So my friend was like, “Matt, why are you trying so hard to sound poetic instead of writing how you speak, because that’s poetic?” And it was so convicting. It cut me right in half. I couldn’t say anything. It was definitely a revelation in a long string of lightbulb moments that played a role in the whole creative process for this record. Hopefully it continues on. You always want to learn more.

Is there a specific message that you’re trying to communicate with Melophobia?

I don’t know if there’s a specific message. I think I’m just doing the best I can to take snapshots of the world, and I’m fallible, so it’s only my perception of things. Hopefully there are some flickers of truth in there. But I don’t know if there’s a specific message. Maybe messages within there… .. But I wouldn’t even call them messages. My whole thing is a quest to be independent of my own desires. Because I justify everything that I do so it’s really hard to judge whether or not something that… You know, it’s like gravity, for instance. I could hope that a quarter would float, but a quarter won’t float. I think that if you seek for that [independence], you can create great art in life.

This may be slightly off topic, but I’m just curious… If you think back to when you were first listening to music, when you were still discovering, is there an album or a moment that truly changed you and the way you felt and thought about art?

Absolutely. Yeah…. When I was younger, right when my parents were getting divorced, I purchased a Bob Dylan record. I’m not sure if it was Bob Dylan Freewheelin’ or if it was a compilation disc. And I first listened to it, and because I had been so… trained to listen to particular sounds and… You know, we’re trained to like certain things throughout life, and so it didn’t make sense to me when I first heard it. It was rough around the edges and it wasn’t perfect. Everything wasn’t in the perfect place. And so when I first heard it, it didn’t make sense to me. And I sat down and I watched a documentary with my father about Bob Dylan – it was Bring It All Back Home, I think – and so we watched that documentary, and it clicked for me. And I was blown away. And I went back and listened to the record with new ears, and it changed everything, and I never listened to music the same way again. Music was different from then on out. Because I was very sheltered from music growing up – well, not sheltered from music, but from secular music – and so I had, you know, everything I’d ever heard was perfectly recorded, compressed, everything was in the right place, extremely produced, extremely edited, and so when I heard that, it was like, wow. It was real emotion. And it was a pretty special moment.

Cage the Elephant’s new record, Melophobia, will be out Tuesday, October 8. Check their website for upcoming tour dates (nothing soon in our neck of the woods, but here’s to hoping).