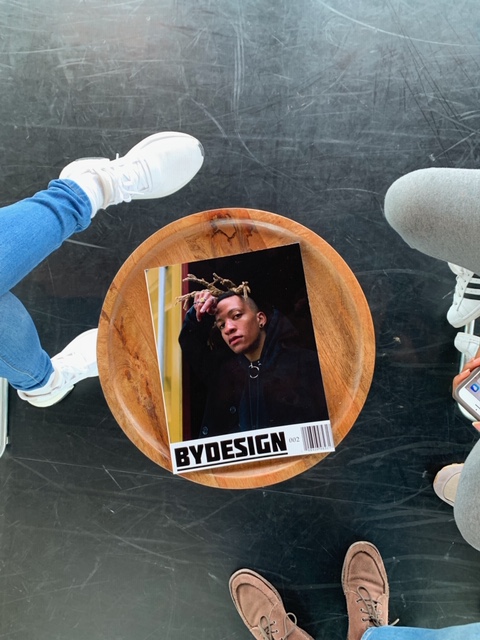 Photo courtesy of By Design

On the outside, Kansas City has a dynamic creative community. But for photographer Muenfua Lewis, there was something missing.

“I’ve gone to a couple meet-ups here and there for creatives, and though I found a community on the black side, there was unfortunately a lot of exclusion in other areas,” Lewis says.

So he reached out to friends Justin Ikerionwu and Tony Henry with an idea for a look book that would highlight people of color who were making a creative impact on their community. The plan, Lewis says, was to call attention to “a variety of people outside of just the visual arts. It could be a chef, it could be a particular entrepreneur, it could be anybody really that is using their creativity to improve or to succeed.”

Lewis would manage art direction, Ikerionwu would write and edit for the publication, and Henry would handle the design.

“We understood that we wanted this to be something that’s not just, like, a passion project or hobby,” says Ikerionwu of what is now called By Design. “We want this to be a business that we can put out and have other creatives and young people gravitate toward and find an outlet for their creativity.”

They kicked off the idea with the Melanin Showcase in September of 2017, a pop-up photo shoot that encouraged people of color to dress up, take photos, and network. They thought maybe a few friends would show up. Over 75 people came.

“I think that that really sparked an idea that not only can we do this, but people are really yearning for this,” Ikerionwu says. The magazine’s online presence and bi-annual print magazine has since showcased a number of creatives in color in Kansas City, including streetwear brand Made Mobb, barber Kay Martinez, Cornerstone founder Obiora Anozie, and choreographer Edith Cruz.

On Saturday, By Design is launching its fourth issue, called The Disruptors,  at a pop-up exhibition and festival called Saturday Market. The event will include interviews with seven creative entrepreneurs who will give advice on how to implement creative ideas. The panel is packed with local names, including Morgan Cooper, a filmmaker whose BEL-AIR trailer went viral earlier this year;  Chef Jayaun Smith, personal chef and winner of The Pitch’s 2018 Best Chef of KC; Donette Lowe, founder of Cozy Girl Squad; Chris Goode of Ruby Jean’s; Nicky Gonzales, makeup artist and founder of Soposhy; Timothy Moore, who founded St. Louis Black Fashion Week; Corey Jarvice, who works in digital media; and Paakow Essandoh, Mizizishop streetwear designer who “represents the immigrant kid just trying to make it into a creative world,” according to Lewis.

“Kansas City is really resource-rich, but all the resources are kind of focused in at those startup businesses—those businesses that might be ready to scale,” says Ikerionwu. By Design aims to connect people no matter their size, by sharing the stories of successful community members and bringing them together at local events.

Saturday Market is hosted by Jayden Fleming, founder of Mars Mansion, and Streetwavve Podcast and will include music by DJ KidSupreme, snacks and drinks, By Design’s newest t-shirt, and the chance to buy issue four.

“I think this issue will be really dope,” Lewis says. “It’ll really showcase a level of intentional diversity that may be a tad bit unfamiliar around Kansas City. It will just see so many different people represented in some form or fashion.”