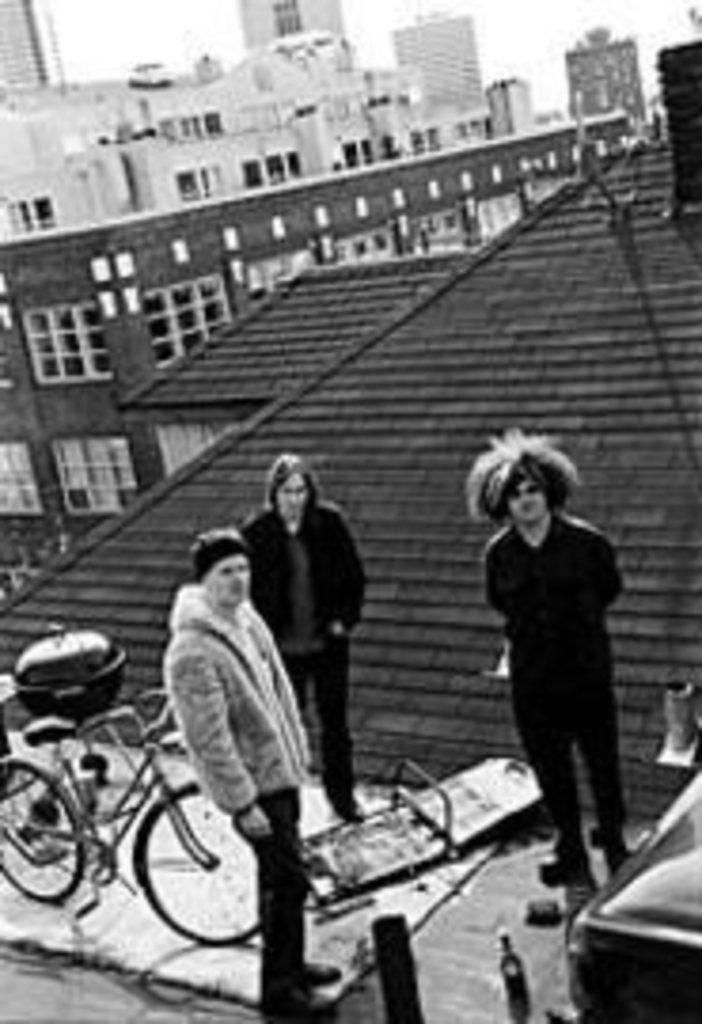 Hey, the Melvins are celebrating their twentieth anniversary this year! According to modern gift-giving tradition, that means the trio is supposed to have some platinum coming its way, right? A platinum album for its latest effort, Pigs of the Roman Empire, would be très appropriate, no?

The closest the Melvins might come to that precious metal is if singer-guitarist Buzz Osborne, drummer Dale Crover or bassist Kevin Rutamanis pass by Tiffany’s in Los Angeles on their way to band rehearsal.

Sure, the Melvins have a back catalog bursting with landmark recordings, have given thousands of brain-melting live performances and have earned the respect of innumerable music-making peers. But the Melvins remain on the fringes of hard rock, suffering indifference, puzzled stares or the not-infrequent “Wow, I thought those guys broke up a long time ago” from those outside their cult following.

Forget big sales, big hits, big money and big props. Like most bands that do the heavy lifting for more successful progeny, the Melvins simply weren’t destined to be superstars.

“Yeah, I figured that one out about 19 years ago,” Osborne, 40, says with a laugh over his crackly cell phone as he drives through Los Angeles. “Over the years, I’ve heard it all, literally everything you can imagine. ‘You’re gonna be huge. We’re gonna do this, we’re gonna do that. You guys are gonna have this happen, that happen.’ And I just nod my head. ‘Uh-huh, uh-huh, suuure.’

“I surpassed any expectations I had with this band within the first year,” Osborne continues. “Thing is, most bands want to be big rock stars. They start out more career-oriented than we ever were. And yet, we have the career. They got discouraged and quit…. We’re able to make a living making music because we’re not stupid about it. I’m not driving a Lamborghini right now. No one’s having blow parties with Hooters girls backstage, you know? We do stuff like pay bills and live!”

Mundane as that may sound, the Melvins’ history is anything but. One could argue that the band single-handedly started the Pacific Northwest grunge scene, slowing things down to a Sabbath sludge crawl when everyone else was playing jacked-up punk rock.

And of course, without the Melvins, there probably would have been no Nirvana. Osborne let childhood pal Kurt Cobain lug his amp to gigs in Olympia and Seattle. So inspired was the scrawny roadie by the group’s colossal sound that he started his own little band, dreaming that someday his group could be like the Melvins.

Most important, though, the Melvins boast a completely demented, insanely great 19-album discography. Each new album invariably has deviated in exciting, experimental ways from what fans might have expected. They’ve plowed through pulverizing quasi-metal, eardrum-obliterating noisecore, trippy stoner rock, and electronic-damaged almost-pop, usually at least a year or two before such styles were in vogue.

The brand-new Pigs — a collaboration with veteran industrial-ambient creepmeister Lustmord, known for his sinister work with Throbbing Gristle and SPK — is yet another bizarre, kick-ass addition to the Melvins canon. Lustmord brings noises and atmospheres straight outta the ghoul-infested graveyard, and the Melvins greet them with crushing riffs and vocals direct from Satan’s larynx. It’s some seriously chilling, disturbing, heavy shit.

“We’re just trying to keep things as interesting as possible,” Osborne says. “I had the idea to work with Lustmord quite awhile ago, and I knew we’d come up with a record like nothing we’d ever done. I want what we do to be different. I want it to be challenging, not just like ‘Here’s another little song for ya … and here’s another little song for ya.’ I hate that shit, hate it. I want it to be more of a journey than that, and less of a predictable nightmare.”

Pigs arrives on the heels of the Melvins’ coffee-table book Neither Here Nor There, a massive collection of artwork and writing (along with a 19-track retrospective disc) celebrating the band’s long history. The band is more prolific now than ever (expect another album, a collaboration with Jello Biafra, next month), but the twentieth anniversary has given Osborne cause to reflect on the past. And he’s often amused at how some have romanticized chapters of the Melvins’ story.

Like the early, “good ol’ grunge years” in Washington.

“The good old days weren’t so good,” Osborne says. “Ohhhh yeah, so much romance in poverty. You don’t have a pot to piss in, and your car’s out of gas … us and Soundgarden and Malfunkshun would advertise for a month and get forty people at the show. Yeah, that was great. Real character building. The best thing that ever happened to us was moving away from Seattle.”

And then there’s the whole Kurt Cobain thing.

“People still cannot fathom why a guy like him would have ever been interested in a band like us, because they’re certainly not interested in us,” Osborne says. “They don’t get it…. And journalists rarely want to hear what I really think. Oh, no, no, no. They get put off by the fact that I refuse to look at the good side of being addicted to heroin and dying. We wanna talk about the good side … well, what would that be? He’s fucking dead! He was married to the Wicked Witch of the West, and he’s got a fatherless kid now. That’s great! What’s the happy part?

“I don’t feel real good about any of what happened, but he made his own bed, and certainly the people around him didn’t care,” Osborne continues. “On a strictly personal level, I found every single person involved to be a total piece of shit. Management, labels, everyone. Courtney [Love] never liked me, and I hated her guts.”

But Osborne still acknowledges that having had Cobain as the band’s biggest fan wasn’t exactly a bad thing, either.

“I have benefited greatly from my association with Nirvana. I don’t mean to tell you I haven’t,” Osborne says. “I knew Kurt since he was 11 years old. But that doesn’t mean I have to think that everyone involved with the whole thing was cool. And I saw things change with me and Kurt long before he ever became an icon. People expect me to be really jealous or bitter because I’m not some billionaire, and nothing could be further from the truth. I’m a very, very happy camper. I’m alive. I have a career. He’s fucking dead! I wouldn’t trade places with him, would you?

Some things, Osborne knows, are far, far better than being a rock star.

“Right now, things are going better than ever for us,” he says. “We get to keep going, doing what we do, keep touring and making records we like, and thankfully we have a lot of fans that haven’t abandoned us. I mean, a bunch of magic beans aren’t going to appear in my pocket — ‘Fee fie foe fum, I’m a millionaire,’ you know? It’s just not going to happen. But I get to make a racket for a living, and that’s pretty fucking cool. I’ve got no regrets, not a one.”