Burned out: Kansas City paramedics piled on overtime through pandemic 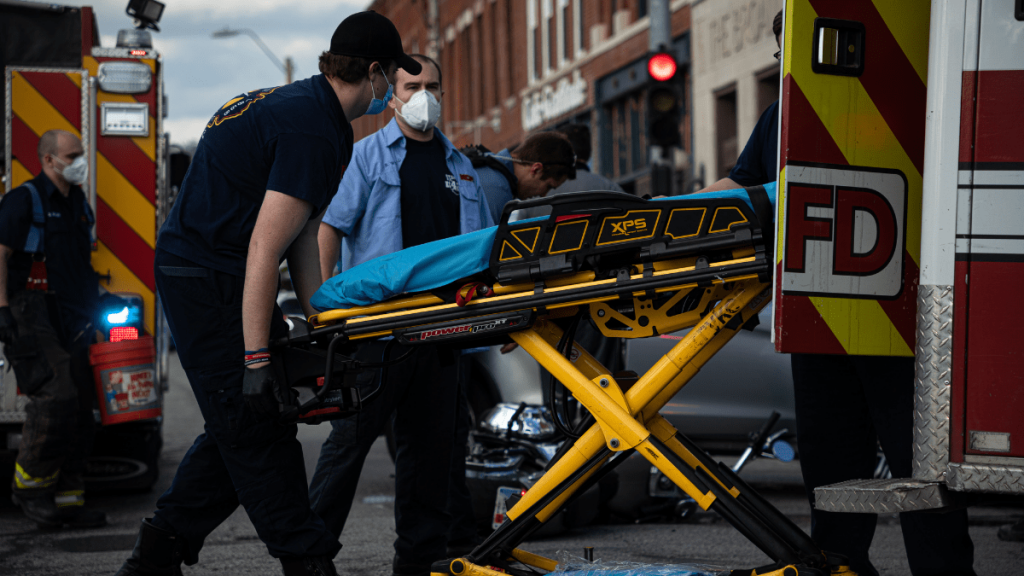 KCFD paramedics unload a stretcher for an individual involved in a motorcycle crash in the Crossroads neighborhood. // Courtesy of Zach Linhares/The Beacon.

Thirty minutes. That’s how long it takes Kansas City Fire Department paramedics to sterilize an ambulance after responding to a COVID-19 emergency. As cases skyrocketed in Kansas City last year, those minutes started to add up.

From March 2020 to March 2021, KCFD saw a 22% increase in overtime hours compared to the same range the previous year — to the tune of $13 million, according to a Beacon analysis of public payroll records. In 2019, overtime costs added up to $10 million.

The increase in overtime, combined with an already short-staffed paramedic unit, forced an overburdened system to its limits.

While vaccinations have offered a reprieve, paramedics are dealing with burnout from the past year. The mental health effects are hard to predict — and likely to remain for some time.

Adam Prentice, a paramedic with KCFD, is one of five Fire Department employees who earned over half of their gross salary from overtime in 2020. While overtime is common for paramedics at any time, 2020 presented unique challenges, including time for sterilizing equipment and an increase in emergency calls.

Early in the pandemic, Prentice said paramedics had to be quarantined for an extended period of time if they responded to a COVID-19 case as rapid tests weren’t available yet. That meant it was up to the workers who weren’t in quarantine to fill empty shifts.

“You’re stacking people’s calls double, triple what they normally are, and you can’t keep up,” he said.

Tim Dupin is the union president for IAFF Local 42, which represents fire department employees in the greater Kansas City area. He said at one point, out of 1,356 KCFD employees, there were 244 in quarantine at the same time.

While $13 million is a large number, it’s not unusual for fire departments to rack up heavy overtime costs, KCFD deputy director Richard Gist said. There’s always a need for qualified people in ambulances, meaning anytime someone takes vacation or a sick day, the department will need to pay overtime to their replacement.

During the pandemic, KCFD would hire fire battalion chiefs with medical licenses to assist on calls, whose overtime costs more than other employees.

The main difference this past year was dealing with a highly transmissible virus.

“The amount of stress in doing your job was radically different,” Gist said. “At that point, every patient we encountered was someone who could make you ill, in the time before we had vaccines. And we weren’t even sure then how it could be transmitted.”

In the past year, three KCFD employees died of COVID-19, including a paramedic. Their deaths impacted their fellow first responders. Burnout has become a common experience, and as COVID-19 cases remain high in Missouri, paramedics remain stretched thin.

“Overtime is getting back to a normal level, but we’re still responding to a lot of COVID calls,” Dupin said. “Missouri is still very high in COVID-positive people, especially with the new variant.”

A shortage of paramedics existed before the pandemic. It can be difficult to attract people to such a demanding job, and applications to KCFD were down the past two years, Dupin said.

In order to get certified, people must complete two years of college. From there, they apply for a position, undergo academy training and get assigned to a department. For the first few years, Prentice said, most of their income is spent paying off college.

“You come out of school making the same amount you could at Walmart,” he said. “As a new graduate, you get thrown to the wolves. Financially, sometimes it’s not worth it.”

Prentice said many paramedics have to take on long overtime hours to make a livable wage their first few years, or work a second job.

The number of licensed paramedics in Missouri hasn’t grown in the past five years, according to a 2020 survey from the Missouri Emergency Medical Services Association. Respondents said compensation and benefits were the most important factor when seeking employment — and the top reason for leaving a position.

Dupin said the most recent bargaining agreement reached with the city, which includes a higher base salary for firefighter paramedics, should help attract more employees to Kansas City. KCFD is accepting applications now, starting at $67,876 a year. The top pay possible is $85,920 after eight years.

He’s hopeful that heavy recruiting will lead to increased applicants this fall and establish Kansas City as a “destination employer” for firefighter paramedics across the nation.

“We’ve set the bar in Kansas City for wages and benefits for the paramedics,” Dupin said. “So we’re hopeful that some of the departments around the metro areas that are having the same difficulties in attracting good candidates will see how much of an advantage we’ve gotten by doing this.”

Hours away from family

When Prentice is feeling the stress of his job, spending time with his wife and kids keeps him grounded. When COVID-19 calls became routine, however, it cut into his family time.

At one point, he isolated himself in a separate part of the house to keep them safe. Some paramedics temporarily stayed in hotels.

“We have a daughter who gets sick a lot, and we were worried her immune system wouldn’t be able to fight it off,” Prentice said.

Despite the precautions, Prentice’s entire family contracted COVID-19. The kids got runny noses. Prentice needed to go to the emergency room.

He had to take about a month off, and while he’s now healthy and back to work, interacting with people who don’t take the pandemic seriously can be frustrating. Only 39% of Missourians were fully vaccinated as of July 7.

“It’s really hard when we go to calls and these guys don’t believe me” about COVID-19, Prentice said. “They think I’m some sort of government conspiracy. I assure you, this is the real deal.”

Gist said responders develop day-to-day coping mechanisms throughout their career, but those strategies were put to the test by the length and intensity of the COVID-19 crisis.

“The things we invent on the fly get us through the night, but maybe not through the week,” he said. Helping first responders build and maintain resiliency can help relieve some of the mental effects of their work.

The IAFF Local 42 provides a behavioral health program, called 42 Cares, that’s designed to help workers navigate stress and other mental health issues. Dupin said the program, which has a full-time behavioral health specialist on staff, has seen increased use by union members since the start of the pandemic.

Prentice said addressing the mental health ramifications of the pandemic will be an ongoing challenge.

“As far as what we can do, I don’t know,” he said. “KCFD has some great programs for people who reach out, but a lot of people don’t like to talk about their feelings and all that.”

Cultivating hope in the future and a return to normalcy is essential, Gist said.

“You want to see a light at the end of the tunnel, and be sure it’s not a train coming at you.”

The Beacon is an online news outlet focused on local, in-depth journalism in the public interest.