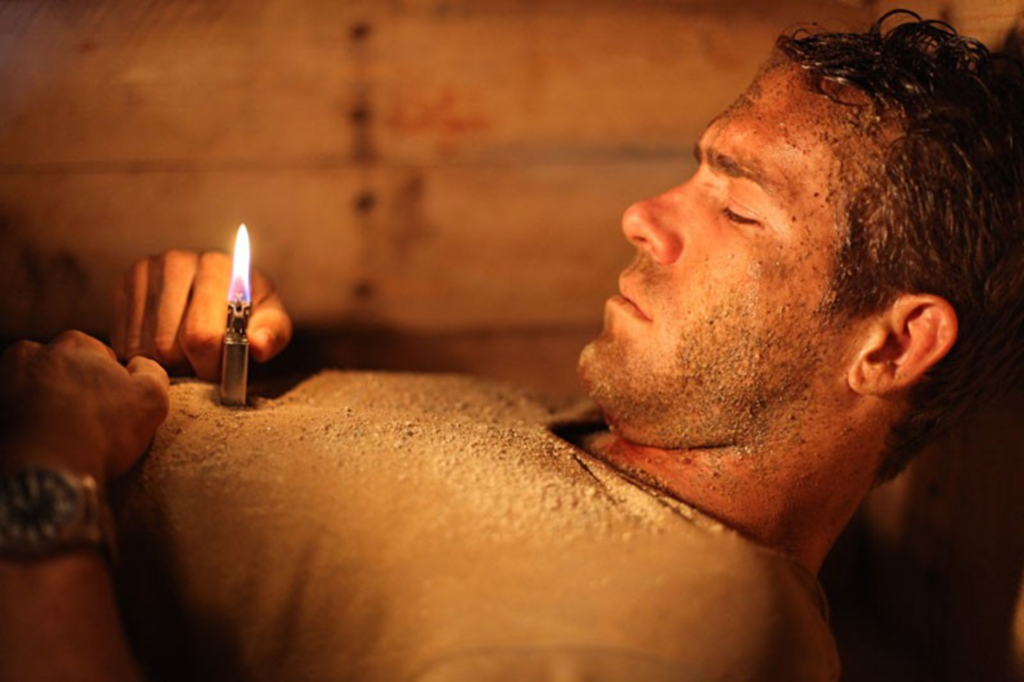 Paul (Ryan Reynolds), an American truck driver for a contractor in Iraq, is captured in an insurgent attack and wakes up buried in a coffin, totally defenseless but for a Zippo, a pencil, a flask, a flashlight, anti-anxiety meds, and someone else’s cell phone. He uses the latter to make a series of increasingly hysterical calls for help, which function as vehicles for basic exposition (“Is this 9-1-1? I’m buried in the middle of the desert”) and as microdramas that slowly sketch the details of Paul’s character. (But when he calls his wife’s friend a “stupid fucking cunt,” is it because he’s a dick or because the claim is legitimate?)

Reynolds, an actor best appreciated for his Canadian good looks and light comedic charisma, is tasked with carrying Buried. Director Rodrigo Cortes keeps the action bound to the box, limiting his lighting to naturalistic approximations, so that much of Reynolds’ performance consists of him grunting and heaving in the dark. Fair enough as long as Buried is a movie about being, uh, buried, but not so great when it tries to comment on bureaucracy and foreign policy.

“I didn’t know it was going to be like this here,” Paul wails to a British hostage-situation fixer, who responds, somberly, “I don’t think any of us did.” That sentiment might have been easier to take seriously if the voice of Iraqi terrorism weren’t played by a Spanish actor whose double-accented, stunted English calls to mind a very, very angry Taco Bell spokesdog.