Bump up the jams. 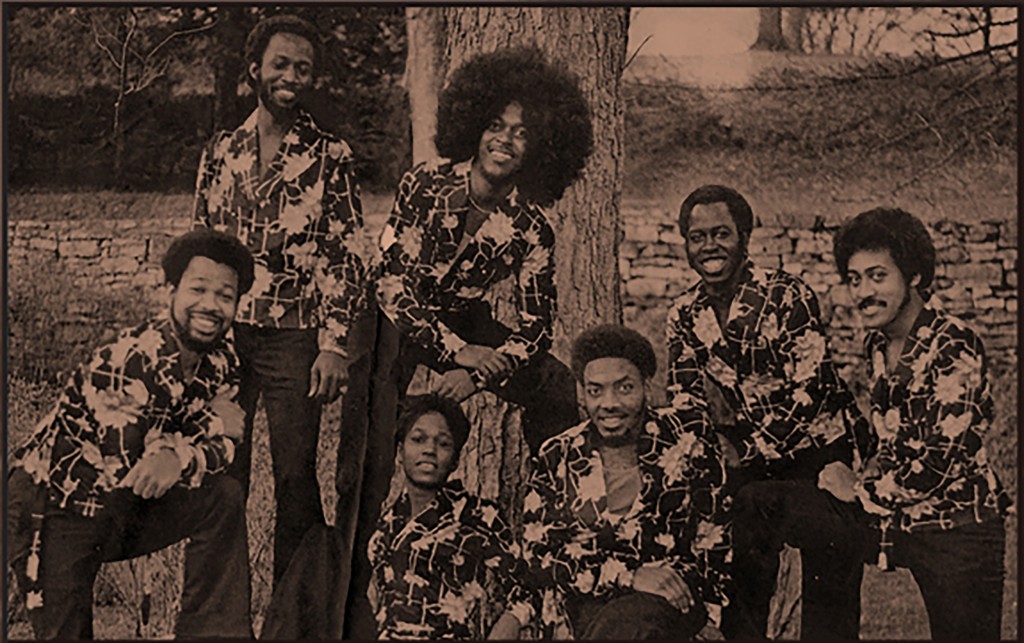 A group photo of The Bump Band. // Photo courtesy of Lotuspool records

Jerald “Bump” Scott has been making music for more than 50 years, but his output wasn’t available in any physical format until 2013. Five decades of material—a lifetime of creative yield—was somehow never an object you could hold in your hands.

Numero Group is a Chicago-based reissue label. They hoped to give Bump & The Soul Stompers, as well as The Unnatural Funk Band, the releases they finally deserved. Thanks to a cold call, Numero Group convinced Bump they’d be keen on releasing 45s of his entire life’s work.

Bump liked the sound of that.

“They found me through the UMKC archives,” he explains. “I didn’t even know we were over there. We were in the UMKC archives with Allen Bell Productions. He was a booking artist and he had this big company called America’s Best Attractions and he filed some archives over there at UMKC. That’s how this Numero Group called me.”

Bump adds: “It was like a validation of what we’ve been trying to do forever—since I got into the music business It was like it finally got out there.”

As the keyboardist and bandleader put it, every time he would try to get the music going with his different bands and enough money saved up to go to the studio and record—tragedy would strike.

“We’d save up money and somebody would say, ‘Hey, I got a problem,’” Bump says, sounding weary. “[Someone will say,] ‘I need my money.’ Then somebody else will say, ‘Well, if he gets his money, I want my money,’ and then we’d have to start all over again.”

Bump and his group would eventually get enough money to record a full-length record in studio. The fruits of their efforts was the soon-to-be-released 1983 album, Our Music, recorded under the name The Bump Band.

With Bump on keyboards, Robert Clarkson on guitar, Robert Kelly on bass, Terry Grimmet on sax, Wanda Byrd on vocals, and Herman Lacy on drums, Our Music is an album that combines elements of soul and funk from the late ‘60s and on. It also showcases the greatest swath of Bump and his group’s talent.

Our Music’s eight tracks bring something familiar, yet new and intriguing, to the world of funk and soul. The listener is initiated with the playful call-and-response opening of “Don’t Lie to Me,” before being led through a series of worthy soundscapes: the lounge-style instrumental jams as heard in “Snookie’s Vibe,” the party funk of “Can We Party Wit Cha” and “Are You Ready to Ride,” and the brilliant slow cruiser that is “Living In the Past.”

The story behind the album is all too familiar. Bump Band—à la Detroit proto-punk band Death, or the hard power pop of Memphis’s Zuider Zee—is finally reaching appreciative ears after being shelved for decades.

As label Secretly Canadian did for Death, and Light In The Attic did for Zuider Zee, Chris Garibaldi’s Kansas City label, Lotuspool, is looking to bring The Bump Band to the music world at large.

Garibaldi and Bump’s son, Jeremy, work together. Jeremy—a budding rapper—had Garibaldi over to listen to an album he was recording. The music backing his raps was a variety of songs recorded by his dad’s band.

“It was an amazing mix of ‘90s party rap and ‘70s and ‘80s funk,” Garibaldi explains. From there, the pair began working together with an eye toward releasing Bump’s album with Lotuspool.

During that time, Jeremy asked his dad for a particularly special birthday present. He’d heard “Don’t Lie to Me” when The Bump Band practiced it in his basement when he was a little boy, and he wanted a recording.

“Amazingly, Bump not only found a studio version of ‘Don’t Lie to Me,’ but he found the rest of the Bump Band album,” says Garibaldi. “A day after Jeremy heard the album, he texted me, ‘I need to play you something.’ He came over to the studio with a bottle of rum. We drank and listened to the album. Three songs into the listening session, I turned to Jeremy and said, ‘We have to put this out immediately!’”

Bump’s version of the story is similarly electric. Upon Jeremy’s request to hear “Don’t Lie to Me,” Bump set off on a treasure hunt.

“One of the recorders that I’ve written most of my songs on—it’s kind of broke a little bit—and I had a hard time trying to find the songs because my recorder shuts off and I can’t find anybody to fix it,” Bump explains. “I don’t have the money to buy another one right now. I started going through all my tapes and stuff and I couldn’t find it. Then one day I saw it written on there on the tape: ‘Oh man, there it is right there!”

As Bump relates with some glee, he put the tape on and heard the first track. As soon as it finished, the next began, and another after that. It turned out Bump had taken the album, recorded all those years prior, and mixed it down to a two-track recording before storing it in his attic for nearly 40 years.

Thus, the story comes back around to the rum-filled listening session. Bump passed the recordings to his son, who played them for Garibaldi. Now The Bump Band’s Our Music is ready for the public’s ears.

Of course, there was a bit of work in between discovering the tape, pressing it to compact discs, and creating the digital files. As the Lotuspool press release states, “[T]he original analog recordings were damaged [and] the music has been digitally remastered.”

Additionally, Bump had to unearth the names of the other musicians on the album. 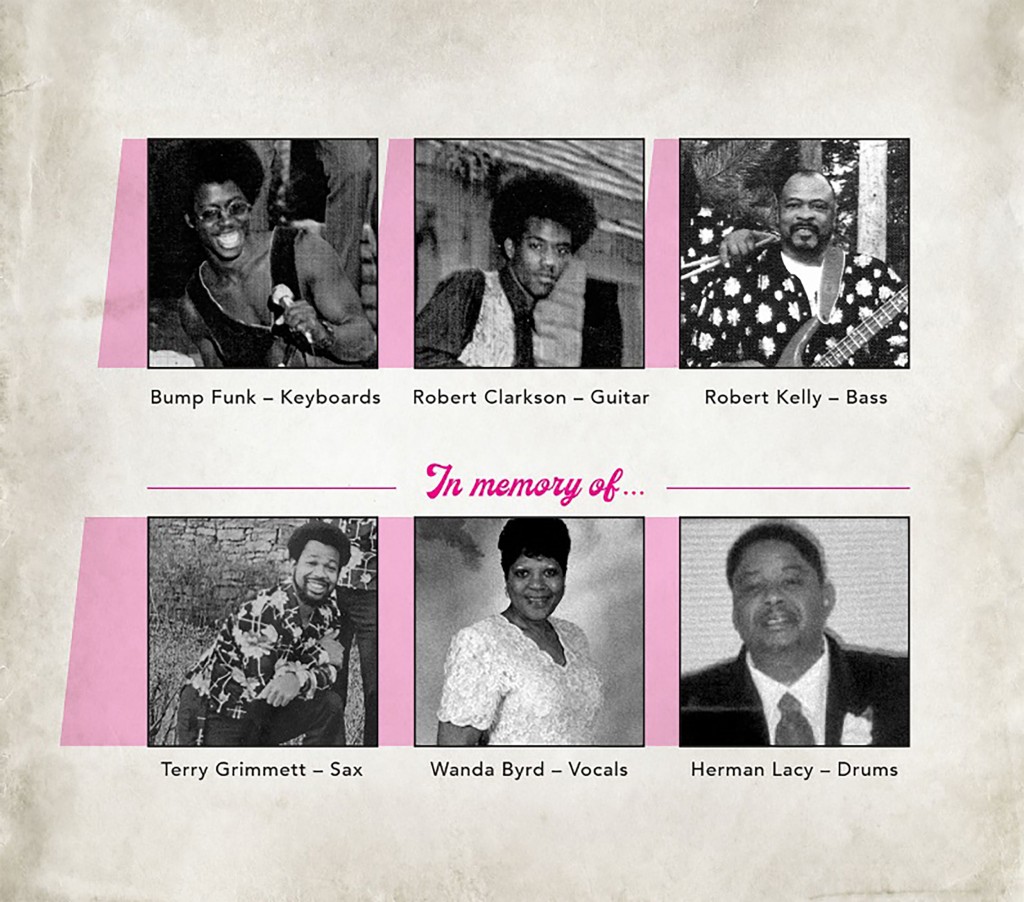 Hard, in that Bump had to listen to the recordings and then, he says, he could hear the different people’s personalities—the voices with which they played.

“Some of them had played with me for more than just The Bump Band,” Bump points out. “One player might’ve been in another group that I had, and I remembered how they played. By the sound of their instruments and the way they played an instrument, I could tell who it was. I had to step back 30 years and just keep at it. I mean, it took me probably a couple of weeks to really figure out who everybody exactly was, and then it came to me.”

It was bittersweet work, though, he says. Grimmet, Byrd, and Lacy have all since died. When asked whether this impending release feels a bit melancholy, Bump gets choked up and needs a moment before he can continue.

There are many lifelong legacies of music-making embedded in the notes of Our Music. Bump himself started playing when he was at East High School in 1968. First, he formed Bump & the Soul Stompers, which became the Unnatural Funk Band, which then begat The Bump Band.

For 40-plus years, he worked as a mail carrier, writing songs while delivering mail. Now in his 70s, he gets to see the music he’s been working on all his life get a proper release.

“I’m super happy that the album is getting out,” Bump says. “[Some of the other band members are] not around to hear it, but their kids will be able to hear what their mother and father did. The world will be able to hear what we were, where we were headed. I knew we were headed for some top billings because, like I say, I write songs all the time. We could have been out there forever, like Earth Wind & Fire and all those groups. That was what I was headed for when we were doing this album.”

While it might have taken decades to get Jerald “Bump” Scott and The Bump Band’s music to ears that need it, the music feels like it’s been waiting patiently this whole time—and now, it can live for decades to come.