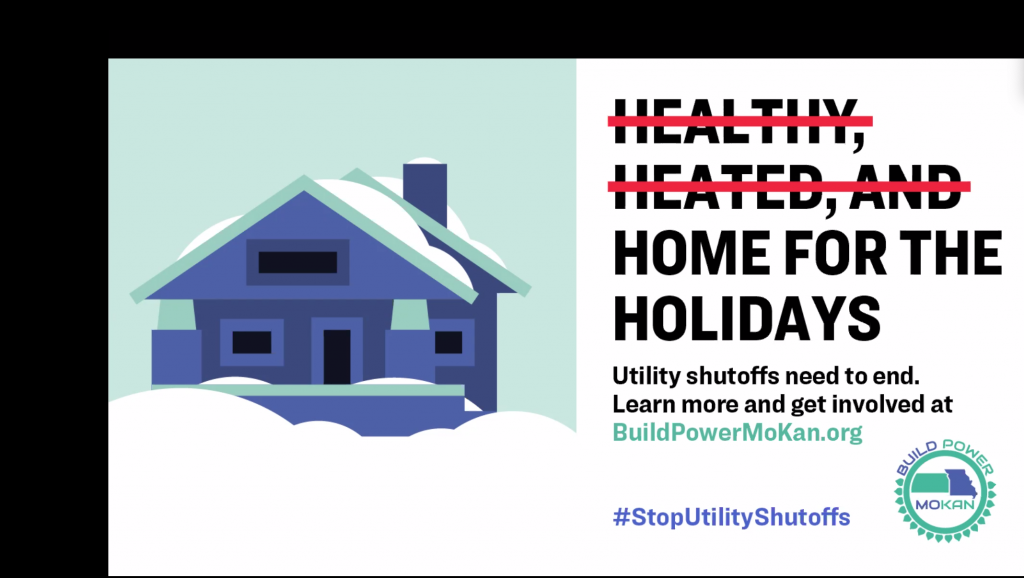 On Dec. 10, Build Power MoKan, a coalition of Kansas and Missouri organizations dedicated to dismantling systems of oppression created by the utility industry, held a Zoom press conference discussing the need for monopoly electric companies to reinstate disconnection moratoria.

The pandemic has brought a greater loss of jobs and income, creating difficulties for residents to afford their monthly bills. The push for ensuring residents who are unable to pay their utility bills aren’t put out in the streets, particularly as the cold months approach, is vital. If these electric companies refuse, it is Governor Kelly and Governor Parson’s duty to step forward and help.

Several individuals spoke on their experience with the issue. Ty Gorman, campaign representative with the Sierra Club’s Beyond Coal Campaign in Kansas, reminded attendees that since the shut-off moratoria expired over the summer, over 70,000 customers have had their electricity involuntarily disconnected by utility companies.“We’re calling on utilities to turn the lights and heat back on for any occupied residences so that they can shelter in place during the pandemic,” said Gorman.

He introduced an open letter put together by Build Power MoKan that calls for these companies to implement common-sense programs that allow people to stay in their homes. Not only is this imperative for the health and safety of individuals and those they live with, but it will also help decrease the spread of COVID-19. He also presented a graph demonstrating how people of color have been greater affected by utility disconnection. 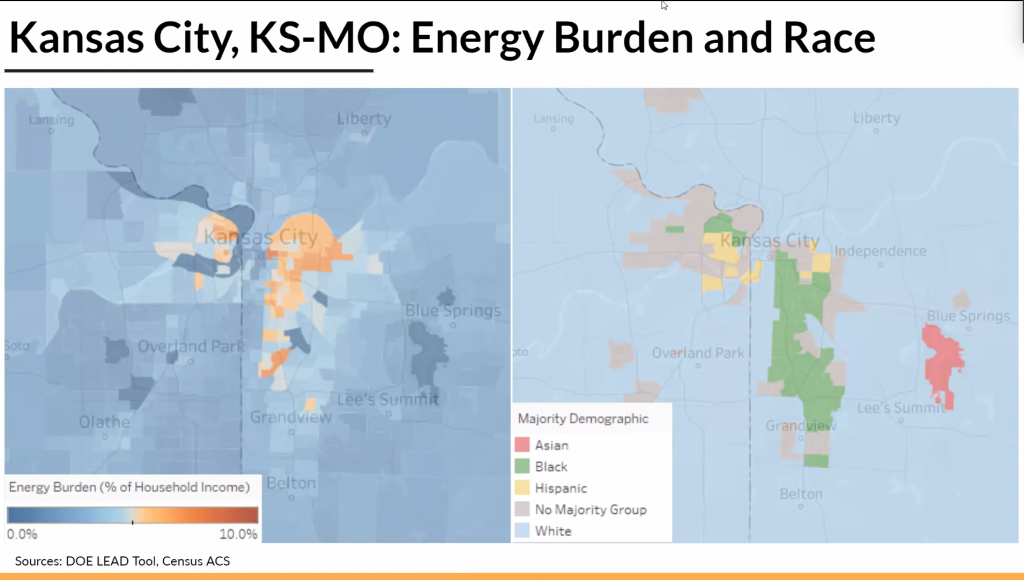 Brandy Granados, a leader with KC Tenants and a single mother, lost her job back in March. Working in Kansas but being a resident of Missouri, she struggled to receive unemployment and went as long as six weeks before the issue was resolved. With the school year being virtual, Granados knew she couldn’t return to work having a son with special needs. She didn’t know how to help him if there wasn’t electricity in the house for him to log in online. “When facing eviction, rent comes first, before electricity, gas, or water. You give up lights so you have a roof over your head. You hope that your landlord doesn’t use this as an excuse to evict you. You heat your house with the stove and you sleep on the kitchen floor. You do everything you can to protect your family. But when people in power don’t do the same… you start to ask yourself, ‘Where are the leaders?’”

Though great responsibility in addressing this issue falls on Governor Kelly and Governor Parson, those in roles of leadership with large utility corporations, such as Evergy, are also are included in the issue. As of now, 68,000 Evergy customers are behind on special payment plans and another 21,000 have had their power disconnected involuntarily.

KCMO resident Sheila Thomas was hospitalized on March 17 after having a stroke, seizure, and contracting pneumonia. She ended up losing her job and was behind on her rent and utility bills as a result. Without the internet in her home, Thomas struggled to seek help from nonprofit organizations who might have been able to assist her in making up the difference of her bills. She also has limited access to transportation. “Stopping disconnection is important because nobody should have to face the challenges that I faced in the middle of a pandemic. I’m not the only person in my community facing these disconnections and evictions. Other people I know are facing the same problems I’m facing.”

This widespread issue is something Claire Chadwick, a volunteer organizer with the Kansas Poor People’s Campaign and COVID-19 survivor, has also experienced living in Johnson County. A low wage and essential worker, Chadwick’s bills quickly added up in dealing with the virus. This included her Evergy bill, which she missed two months of payment on. The company showed up at her door and warned her that if she didn’t pay what she owed, her electricity would be shut off. In order for it be turned back on, she would have to pay the bill plus penalty fees. “Living in a low-income neighborhood, there is not a week that goes by when I do not see the Evergy truck making its way into my apartment complex to force another family into an impossible financial situation. It is wrong and immoral in any society, but especially during a pandemic to threaten utility shutoffs and evictions to those of us who are already suffering from the pre-existing conditions of poverty and economic instability.”

The real-life stories and experiences demonstrate the dire need for the utility moratorium to be reinstated. As stated by Rebecca Kling, the Associated Press secretary of the Sierra Club who moderated the panel, “Utility disconnect can be the first domino of larger problems.”

With the nation’s federal moratorium expiring this month, the time for change on a state level is now.

Join Build Power Mokan in fighting for the change. Their open sign-on letter can be read in full here.