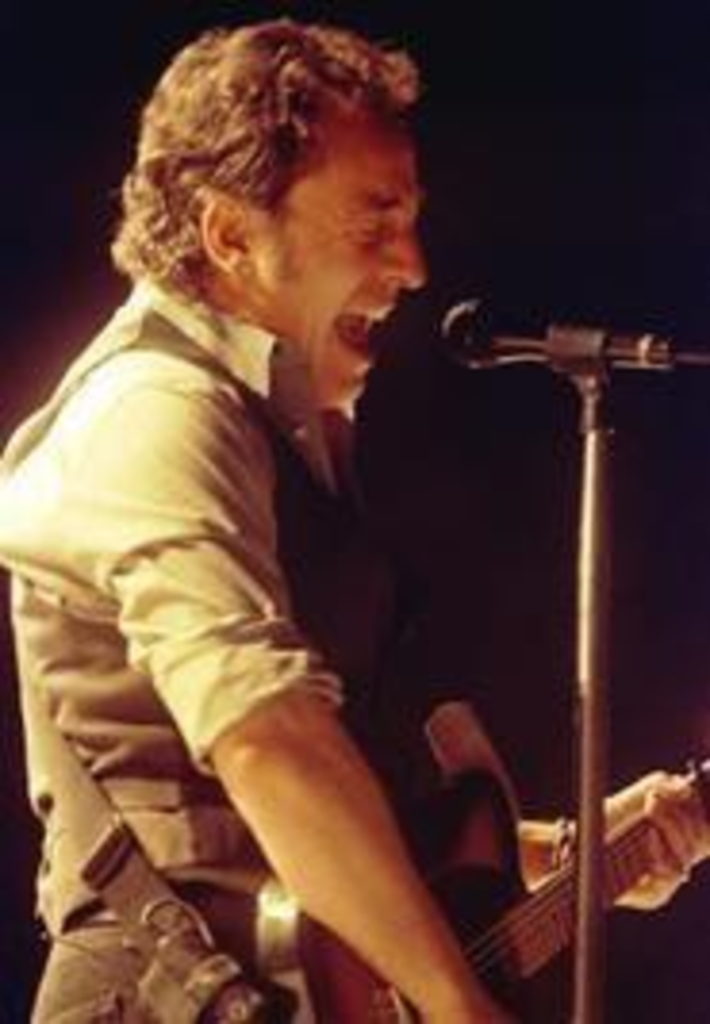 The glory days of baseball featured wool uniforms that contributed to massive water loss for players costumed in them. Bruce Springsteen prefers lighter modern materials, but he couldn’t have sweated more Sunday night if he’d covered a 1946 Yankees uniform with a Brooks Brothers overcoat. At 50, he remains a dynamo of flabbergasting intensity on stage, and the other eight members of his team, though not called on to demonstrate superhuman gusto, deserve equally high praise for their flawless support. Even audiences who have followed the Boss through a career marked by concerts of massive length and power would likely understand a truncated set in 2000. Instead, what Kansas City got was a near-three-hour serving of thick Bruce catalog heated up as though no time had passed since his last visit (1984) or even since the material was recorded.

Sections of the show could easily have been stretches of a 1978 or 1985 concert. The band ripped through “Badlands,” “Out in the Street,” and “10th Avenue Freeze-Out” back-to-back-to-back. It was a live-or-Memorex moment, the songs sounding like something from a vintage bootleg, but with the band present and affably balding (except Boss-wife Patti Scialfa) decades later. There was also “Bobby Jean,” “Darlington County,” and, by request via large, plain signs from two separate camps, “Downbound Train,” all from Born in the USA — and all perfectly wrought.

Other songs had been intelligently rearranged without signs of having been over-considered. “The River,” introduced by Springsteen as a song of solidarity with the wholesale food workers’ union currently on strike, lost none of its grit in a slowed-down version. Opening with Clarence Clemons’ most affecting sax work all night before leading into Springsteen’s dramatic harmonica line, the song was unrecognizable almost until the verse began. It was a good match with a second-half highlight, a version of 1995’s “Ghost of Tom Joad” retrofitted to include the E Street band. Nils Lofgren added polite steel guitar, and Danny Federici’s accordion was more noticeable than some of his organ parts on more familiar songs. Also from the Ghost of Tom Joad album, “Youngstown” was even better, becoming a forceful waltz anchored by Springsteen’s clenched, furious delivery.

After a 1988 tour with Springsteen for Amnesty International, Sting said that while sharing a microphone on stage with the Boss, he was amazed at how loud Springsteen was. Song after song, Springsteen’s tough, fine voice gathered strength and momentum. Whether singing doubled over, on the floor, or in rapid, even suggestive motion (several songs found Springsteen flirting with his microphone stand as though auditioning for a Showgirls sequel, behavior that thrilled the capacity crowd), he never flinched from a note. But as he’s aged, Springsteen has tempered his aggressive style with the ability to tease his own lyrics. “The River” and “Darkness on the Edge of Town,” both touchstones that bound him to his audience Sunday, were performed with a sly downturn of some notes. Springsteen wasn’t settling on a presentation of standards; he was interpreting his own work. No longer a man in his 30s wondering how much more youth could be held onto, Springsteen recast his narrators of the two songs as people suffocated by a climate of defeat, saving their oxygen for that last note before fading into obscurity. The lyrics were the same; the effect of Springsteen’s subtle changes was shattering.

Still, the show was, as Springsteen insisted during several evangelistic spiels incorporated into songs, a cleansing, a rebirth, a healing turned outward. Max Weinberg motored across his simple drum kit with thrilling revivalism, the best instrumental embodiment of the Boss’s sermon. But every member of the reformed E Street Band, including Springsteen, played the 23 songs as though they were rock’s Rosetta Stone. Thank God they’re back.