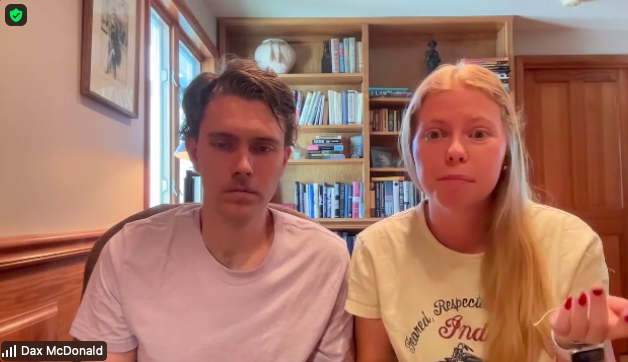 A mother aboard a train derailment in Mendon, Missouri, on Monday climbed on top of the wreckage and went from train car to train car, yelling into each window while searching for her three children, according to her son, Dax McDonald.

The Amtrak train was traveling from Los Angeles to Chicago when it struck a dump truck approximately 100 miles northeast of Kansas City, Missouri. Seven cars derailed with hundreds of passengers inside. Four passengers were killed and 150 others were injured, with some in critical condition, according to a news briefing Wednesday from the University of Kansas Health System.

“I honestly thought at first it would just be a large delay,” McDonald said during the briefing. “I’ve heard of trains hitting cars before, but then when I started to feel the train start to tip, I saw the car in front of us start to turn, or fall over. That’s when I kind of knew that this went from a delay to a life-or-death situation.”

She was taken to Moberly Regional Medical Center in Moberly, Missouri, for a CT scan and X-rays for her knee.

Dax McDonald recalled the person in front of him having a seizure and people immediately calling for help with broken limbs or unable to move.

Dax McDonald said he was looking for a way to get out.

“We kind of realized that both exits on the front and back of the train weren’t usable anymore,” he said. “The only real exits, we realized after a while, were straight up from us.”

Survivors who were able to get out of the train stood on top of the derailed cars and helped pull others out through windows.

“I just remember the man that was able to help me climb my way up out of the train was actually, his entire face was scratched up, kind of like the side of my face,” Samantha McDonald said. “It was very, very traumatizing to see that in person and see that actually happening in real life.”

Matt Daugherty, director of business development for Life Flight, said because Mendon is rural, many of the first responders were nearby volunteer firefighters who left their day jobs to help assist.

Daugherty said 11 helicopters responded to the derailment, with the first one arriving within 20 minutes to help assist those who were most injured.

According to Daugherty, most injuries included head wounds, broken bones and cuts from debris.

Dan Manley, assistant fire chief for Lee’s Summit, Missouri, helped coordinate resources and response to the derailment. He said several agencies in the region are equipped to respond to derailments because they have received special passenger rail rescue training.

“I’m so thankful for the entire community of Mendon who came out,” Dax McDonald said. “We went to the high school — they already had drinks and food and water. They had the whole gymnasium set up. The whole town basically came out.”

Dax McDonald said he saw farmers drive a tractor through a field toward the train to help people. He said the community brought crowbars and ladders to help people out of the train.

Samantha McDonald, who is a pre-med student at the University of Arizona, was asked whether this event has changed her mind on joining the medical field.

“I think if anything, this kind of reignites the fire for being a part of the teams that are able to come out there and were on scene and were absolutely outstanding,” she said.

This story was originally published by the Kansas Reflector, a States Newsroom affiliate.