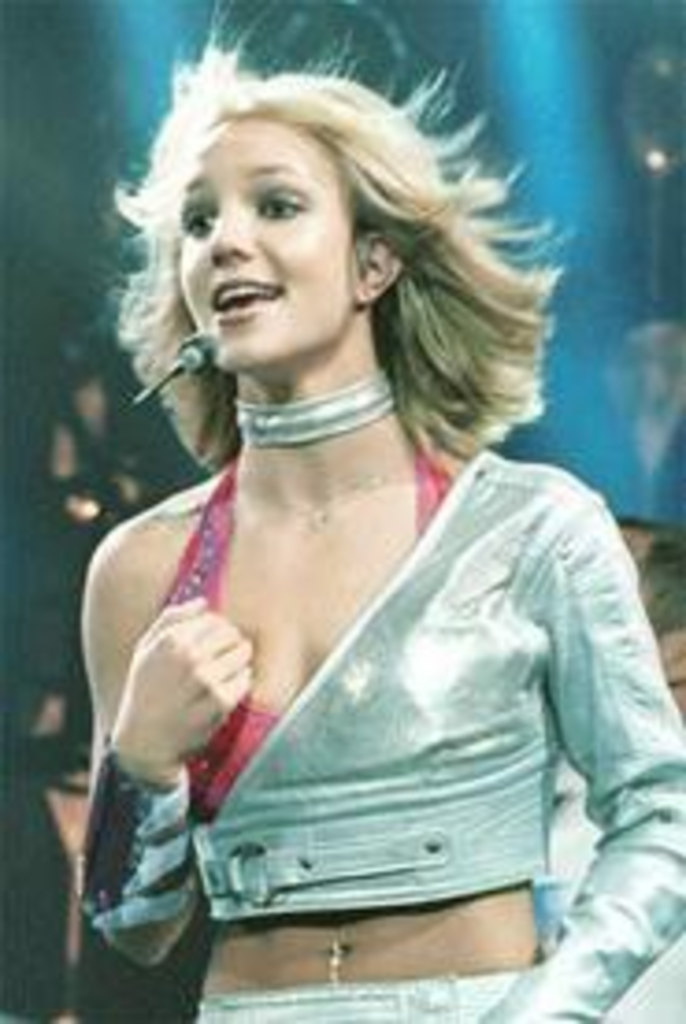 Performances by such entertainers as Britney Spears often are made into punchlines by jaded hipsters, but Monday night’s concert at Sandstone proved that many of these criticisms are off-base observations from people who have never actually attended one of these stars’ shows. For one thing, the music came from a talented band, not a DAT, and the bass lines to such songs as “… Baby One More Time” and “The Beat Goes On” rose to a funky growl in the live setting. For another, Spears’ vocals were the real thing, as she sang in an alluringly low tone throughout much of the evening but capably hit the high notes of such tunes as “Sometimes.” Usually, however, she left the upper-octave duties to her background singers, who swayed and crooned sweetly while upping their volume during Spears’ most strenuous dance routines.

As has been the norm this summer (Up in Smoke, Blink-182, et al.), Spears first appeared on the video screen, where three futuristic renderings of her photogenic face informed fans that they had “just accessed the Britney experience.” Soon after, the queen of teen-pop descended on the stage in a giant floating orb, which her eight dancers opened to reveal Britney in all her midriff-baring glory. The band then launched into one of her catchiest tunes, “Crazy,” allotting a few extra minutes for the musicians to jam and Spears to writhe on the floor. Next was “Stronger,” an anthem — during which Spears claims “my loneliness ain’t killing me no more” — that would be substantially more empowering had someone else not penned the lyrics. Nonetheless, this new tune maintained the opener’s energy and kept the youngsters in the crowd dancing on their seats. Obviously affected by the summer heat, Spears doffed her silver jacket before performing another new number, “What U See Is What U Get”; then she slowed things down for a spell by sitting down with guitarist Skip, whom she identified as her “musical director,” for “From the Bottom of My Broken Heart.”

Shattering the earnest mood created by this love song was a goofy “What Would You Do to Meet Britney” contest hosted by ‘N Sync, or at least their video-image representations. The boy wonders gave each contestant an embarrassing mission, with one required to flop like a fish and another to bark like a dog. The winner, a teenage boy from Shawnee who walked like a chicken, greeted Britney with “I love you” before taking a picture with his celebrity crush. Following this impromptu episode of Fanatic, Spears welcomed concertgoers into her “bedroom,” where she danced in pajamas and slippers while serenading one dancer at a time with “Born to Make You Happy.” This tune featured an out-of-place dance segment, but the patriotic-themed military-march ending to the next song, “Lucky,” proved much more bizarre. Before getting into uniform, Spears showcased her acting skills, as seen on Saturday Night Live, while stepping into the role of Lucky, the titular lonely-at-heart glamour queen at the center of this Supremes-by-way-of-the-Spice-Girls ditty.

Keeping things low-key, Spears performed “Sometimes” while the popular video for the song played behind her. In fact, she was wearing the same all-white outfit, albeit with a lower-plunging neckline. Her next outfit billowed all the way down a series of stairs, and Spears, standing above the steps, said she wished she “could hold this moment forever.” Alas, time-suspension isn’t possible even for platinum-selling stars, so she settled for cooing her way through “Don’t Let Me Be the Last to Know,” which was the weakest watered-down ballad on her latest album but sounded almost charming with live instrumentation. Following this tune, Spears changed outfits again, and her band played an intriguing mix of funk and prog-rock in the meantime, complete with an impressive drum solo.

Soon it became apparent why her latest wardrobe adjustment took so long, as Spears’ dress ballooned out to engulf the entire stage while she was lifted into the air. Dancers emerged from the bottom of the dress, which was scandalous when Madonna did it with a comparatively form-fitting outfit but quite innocuous in this setting. Fans who had been comfortably seated during the ballad-heavy middle section jumped to their feet during the percussive “The Beat Goes On,” the R&B flavored “Don’t Go Knockin’ On My Door,” and her cover of the Stones’ “Satisfaction,” which Skip ended by pounding out the familiar riff while Britney and the dancers frolicked.

After a brief pause, her dancers performed a showcase while their names flashed on the video screen, and then the set ended with “… Baby One More Time,” with Spears starting in a schoolroom-style desk and then bouncing about in a uniform much less risqué than the one in the video — at least until she ripped off this outfit midway through the song, revealing a snug, hipper ensemble. After blowing the crowd goodbye kisses, thus causing the many preschoolers in attendance to ask their parents whether the show was really over, Spears returned for a flame-accented rendition of “Oops! … I Did It Again,” complete with another high-speed dance section injected into its middle. Then, with a few more bursts of fire and a big drum-rolling, guitar-soloing conclusion, the “Britney experience” was over.

However, the Mikaila experience was just beginning. This 13-year-old mini-Mariah belted her way through three tunes, accompanied by bass-heavy backing tracks and four dancers. On “So In Love With 2,” her first single, she easily moved from a convincing growl to a trembling soprano and back, moving an impressed DJ from a certain local pop station to declare her “the only person on the bill with real talent.” She had the moves as well, running through well-choreographed routines as she sang, suggesting she has the right stuff to make oft-imitated videos à la Britney and Christina. Fans cheered politely for her on this evening, but it probably won’t be long until Mikaila-mania ensues and the young songstress headlines shows instead of playing three-song opening sets.