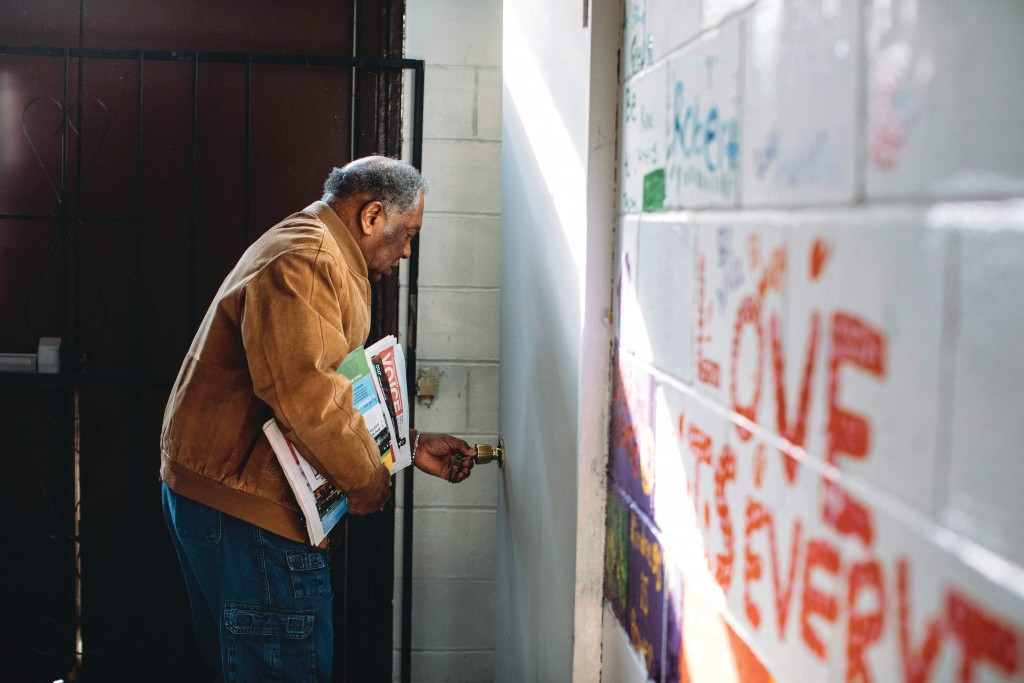 Smith locking up the history of Quindaro neighborhood. // Photo by Chase Castor.

Luther Smith arrives at the old Vernon School nearly daily, ready to share the history of Quindaro Village, an Underground Railroad stop on the Missouri River that received federal designation a year ago.

He has lived in the area all of his life, except for a service tour in New Orleans when he was drafted. Now in his retirement, he makes regular trips to the school building, from which he doesn’t live far, at 17th and Sewell in Kansas City, Kansas. 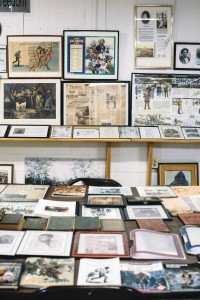 Framed photos and memorabilia line the walls of the museum. // Photo by Chase Castor.

Quindaro Village was home to Wyandot natives before farmers arrived. Abolitionists came and established it as the Kansas Free State port of entry on the Underground Railroad. Slaves arrived there, gaining freedom before moving West. Those who stuck around established a thriving town that included a black elementary school, a vocational school in Western University, and Douglass Hospital.

In March of last year, Quindaro received federal designation from the National Park Service for its historic role.

“I would like to start doing things a little bit differently,” Smith says about the museum. He sees ways to improve it. He would like word to spread that the museum is open and boost its collection with funding or grants. Maybe he could reframe some of the photos.

The John Brown statue at the corner features prominently outside, down the hill from the museum’s entrance door.

Step inside the old Vernon school brick building and large mural portraits of African-American icons greet you: Martin Luther King Jr. Louis Armstrong. President Barack Obama. The sounds of Bingo played by older adults in the community ring through the hallways “O-60, G-55, O-62.” It serves as a meeting room, dining area, and space to help seniors in the area find a social oasis.

On the lower level, youth have added their own colorful marks to the walls calling for an end to gun violence and aspirations for peace and community. Beside it is a saying about the Underground Railroad Museum: “In the last leg of their journey, the freedom seekers met down by the Missouri River and gazed across the horizon to freedom.” 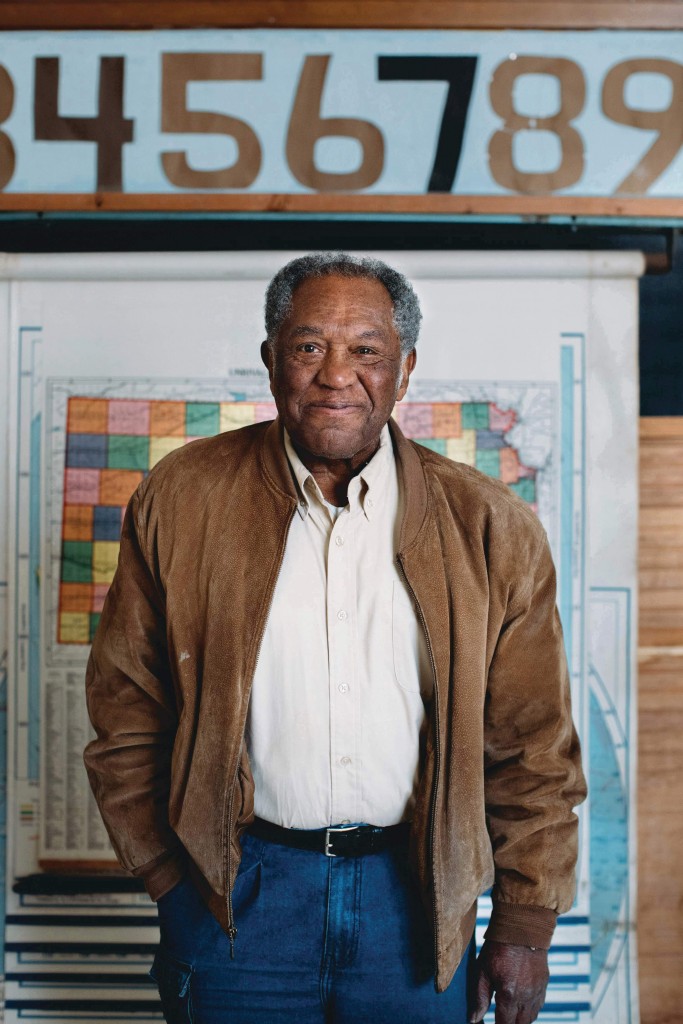 Luther Smith, in the Quindaro Underground Railroad Museum he curates and runs. The museum is housed in the old Veron School which closed in the ’70s, the numbers in the background have been hanging above the chalkboard since the school’s closure. // Photo by Chase Castor.

Framed photos of students posing for their class picture and memorabilia of the people who lived in Quindaro now adorn the building’s old classroom walls. An old piano tucked into the corner creates a setting for a display of local entertainers including the hometown Janelle Monae. “Her family still lives around here,” Smith offers.

“When I first came up here in 2008 there was just a lot of stuff in boxes and crates,” he says. Walk around and Smith relays a personal connection to many of the collection’s items.

“There’s my father right here,” he points to an older class image.

While he has lived in Quindaro most of his life, he encountered the pain of segregation and racism when he was a service member in New Orleans. There, he saw the separate water fountains from which Black and white people were supposed to drink.

“Here I was serving my country, and I had to drink from a different fountain,” he laments. 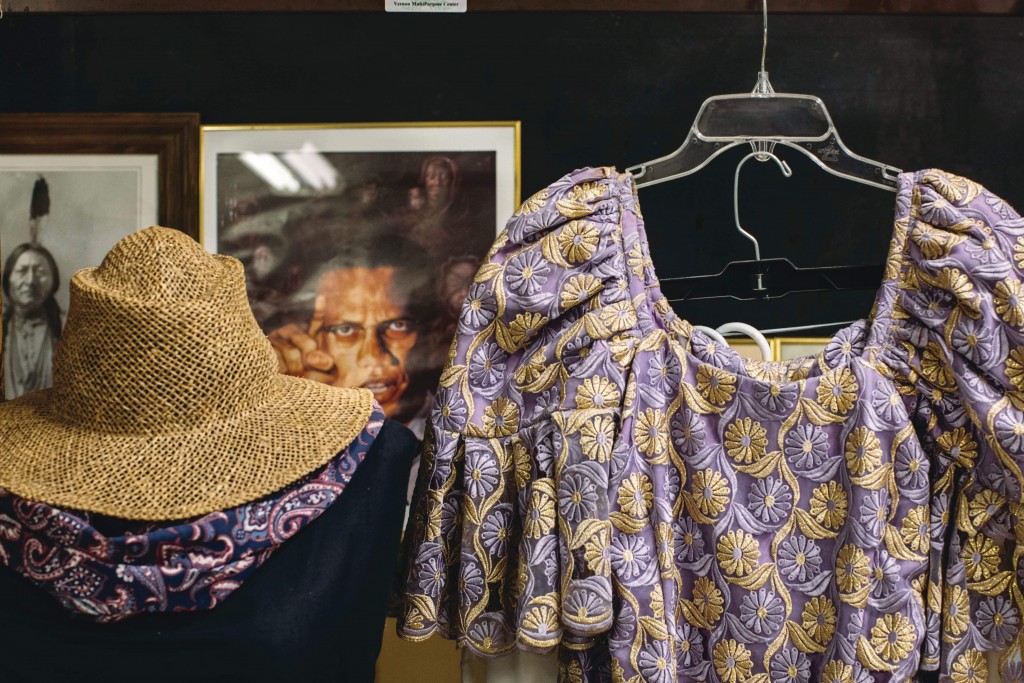 Then there is a poster of Jackie Robinson. Smith watched him play locally. “I used to watch Jackie Robinson at (Kansas City Municipal Stadium) at 22nd and Brooklyn,” Smith says. “I got to see Jackie before he went to the pros.”

“These were used for the slaves when they wanted to escape,” Smith explains of the quilt squares hanging above him. “They would put the squares in the window and it would communicate with the others a message and the masters didn’t know about it.”

Smith has joined a local stakeholder group that meets periodically in city hall to discuss what’s next for the area. Is it a state park? Maybe trails through the Quindaro Ruins? Regional Department of the Interior and state officials are helping to look ahead.

“There’s a lot of interest, but then a lot of the older people are gone, and the younger [generation] it seems, a lot don’t care about the history.”

Perhaps the Underground Railroad Museum can combine preservation efforts with those of the Old Quindaro Museum, with a separate historic collection a few streets away. But until those changes come, Smith will continue to serve the halls of these collected memories of Quindaro Village.

To tour Quindaro Underground Railroad Museum, stop by old Vernon School at the corner of 27th and Sewell.

Monday through Friday, from 9 a.m. to 1 p.m. when the community room is open.