Bricolaje, at La Esquina, examines the personal and the political in the Mexican-American experience 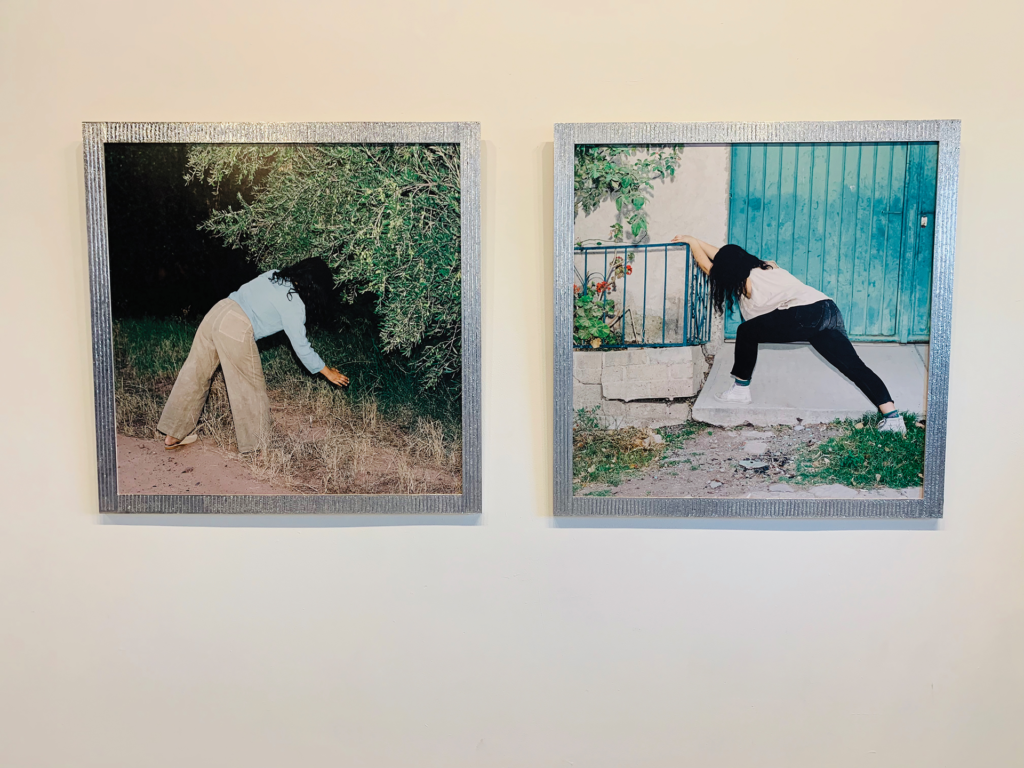 In the news, a border wall is discussed as an economic concern, immigration reduced to statistics and talking points. Bricolaje, a new exhibition at Charlotte Street Foundation’s gallery La Esquina (1000 W 25th St), offers the personal and the specific in contrast to these political generalizations. It manages to be timely without being reactionary.

For the Mexican and Mexican-American artists on display at La Esquina, issues of immigration, identity, and belonging are essential to their lived experiences. Immigration enforcement practices separated them from their parents. Gentrification displaced their families from their neighborhoods. These political realities show up in the artists’ lives and, naturally, in their art: barriers, fences, borders.

Lizbeth Contreras’ “Behind the Border” is woven with hand-dyed yarn, presenting a barricade that resembles one of the designs for the proposed wall on the Mexican border. Mary Kuvet’s indigo-dyed cotton triptych “Estamos Sin Fronteras” (which translates to “we are without borders”) depicts a wall through rolling hills. But behind the wall, there is a silver banner flying, suggesting joy and celebration. There are plowed fields, a lush scene that looks like a land of plenty.

Fidencio Fifield-Perez’s three large-scale works show hand-drawn maps for border crossings, scaled up and cut out of acrylic. These maps have labels such as “camino de diablo,” “beacon,” and “fence boundary.” Much is illegible, just as it would be for those on the journey. The background of these maps are cut out in the silhouette of a chain link fence. The fence shape is ominous, a reminder of the many obstacles faced by those following these maps. 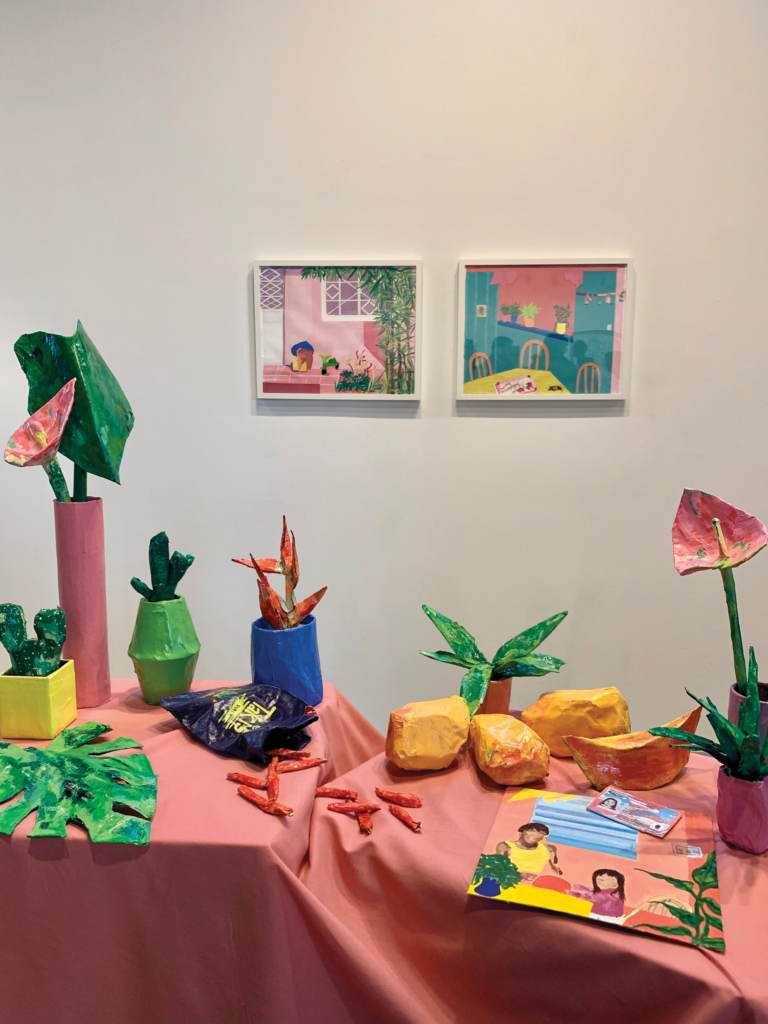 Themes of home and belonging also reverberate throughout Bricolaje. A diptych of self-portraits by Patricia Bordallo Dibildox shows her body on two continents, turned away from the camera, leaning into foliage. These photographs are hung in frames decorated by her mother with an aluminum embossing technique called repujado. Her work is literally framed by family. Representations of her self are held and illuminated by the work of her mother.

Tributes to family, ancestry, and culture, are abundant in Joselyn Garcia’s stunning altar installation, composed of ceramic pots and figures, flowers, bells, candles, and more. The altar is overseen by figures that represent saints. Ceramic pots depict the Mexican border crossing: scenes with drug lords and children used as drug mules, saints and flowers, and more. Front and center is a ceramic coyote head, referring to the “coyotes” who guide immigrants across the border. Both of Garcia’s parents were deported at different times when she was a child, and her altar pieces are part memoir: they seek to recover the loss of identity that comes with separation from parents. The work is intimate and sacred, a reminder that our personal lives cannot be divorced from the culture that shapes us.

Kiki Serna has two collages of domestic spaces: “Granjas, Mexico, 1998” depicts the front of a house, with plants and a trike, while “Meadow Ridge, MO, 1999” is the scene of a birthday party, a banner with the word “FIESTA” trailing off the frame. Across the two paintings, the color palette and visual language remain the same, suggesting a continuity across geography. This visual language expands into the 3D realm with Serna’s “Remnants/Fragments,” in which the quotidian realm of the 2D works is expanded. Papier-mâche representations of flowers in vases, a bag of Takis, mangos, and more unite these works across space and time.

Throughout the exhibit, artists use traditional cultural craft methods — yarn dyeing and weaving, ceramics, repujado — to speak to their own experiences and this cultural moment.