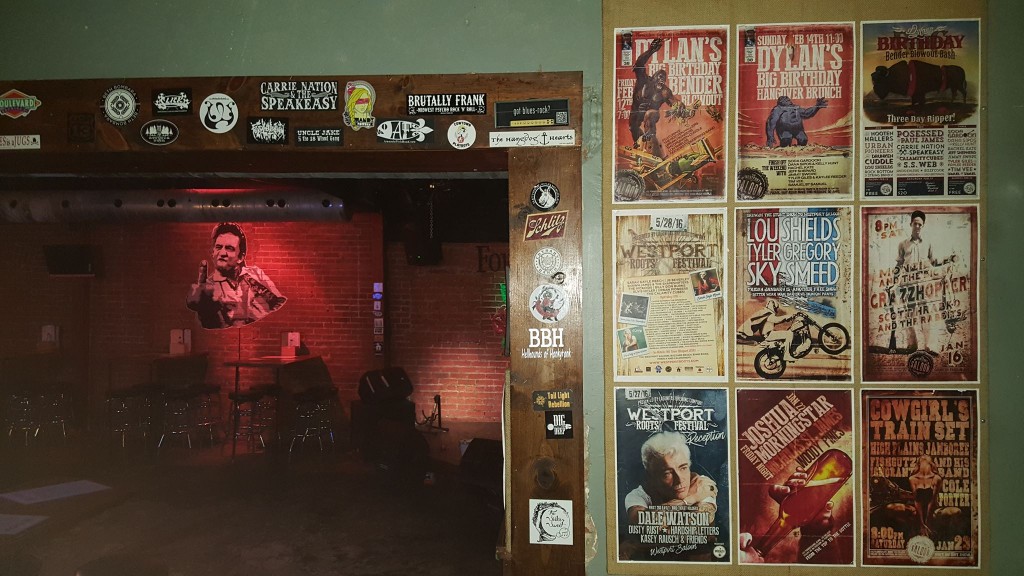 For the time being, venues across the city are shut down, and live music is at a standstill. Thanks to Travis Fields of the Westport Saloon , however, we have one hell of a treat. The bar’s always been at the forefront of livestreaming nearly every show which takes place there, and the vast majority thereof are archived at the Saloon’s YouTube page. We reached out to Fields, and the bar’s owner was kind enough to craft us a Top 5 list of some of his favorite archived livestreams.

So, pour yourself a Four Roses bourbon (the Westport Saloon’s whiskey of choice), kick back, and enjoy this digital night out. Here’s Travis:

“First, sound in the room has always been my priority. Balancing stage volume in a small brick room certainly has a learning curve, so adding livestream audio doesn’t always come out the best, especially when a band like Freight Train Rabbit Killer brings 12 amps with them! It’s the best a small DIY venue could do at the time.

Second, these are not my top 5 shows by any means. Some of my favorite shows over our tenure have been me and a handful of patrons watching a solo artist pour their heart out in the midst of a poorly attended tour. It’s a pretty magical experience when you first hand watch that flood of emotion and passion explode, and there is a great amount of connectivity that comes along with sharing that intimate moment with just a handful people. Of course, the performer and myself, as business people, love a packed house. Let’s be real, though: none of us are in this for the money!

The following are a few of my favorite sets captured by our livestream over the years. I tried to take into consideration both the audio/video quality, as well as the performance itself. When we began the livestream, we tried room mics. That was a flop, as Chads and Betties seem to have an incredible knack for finding them and having loud conversations directly beneath them. As a result, most shows are me trying to balance the room, the livestream, and bartend at the same time. I’ve dumped a ton of our favorite performances due to this. It’s been a learning curve over the years, for sure!”

1. Jayke Orvis and the Broken Band (5/27/17)
This was a reunion show that we put together to kick off Westport Roots Festival in 2017. I lost my ass this year on the festival, but it was a fantastic lineup. Sometimes as a promoter/venue owner, you just have to write off a show as a really expensive concert ticket to a concert you had to work your ass off at! Either way, I had a ton of friends from around the country and overseas that all came to my tiny little corner of the world to share some great music together.

The Hooten Hallers are Missouri’s most underrated band in my personal opinion. They are like Morphine on uppers, instead of downers. While their show is always aggressive and stabby, they are some of the sweetest people you will ever meet.

3. Freight Train Rabbit Killer (5/27/17)
The louder the band, the clippier the audio on these streams, unfortunately. As a duo, Freight Train Rabbit killer is a five-amp setup. They played their first show at the Saloon years ago. Shortly after, I asked Kris if they wanted to open a Monday night show for the Goddamn Gallows. When it came to promote the bill, Kris sent over the following name: “Freight Train Rabbit Killer and the Legion of Ghosts w/ The Hammer of Judgement.” Try fitting that on a damn poster, much less a Facebook event! The duo I thought I was booking ended up being a nine-piece, doomy orchestra and it was amazing. Every Roots Festival I hosted afterwards, I invited FTRK with the Legion. This video was 2017. 2018’s Festival was closed out with FTRK and a band of about 15 people on our outdoor stage, complete with a cowboy in a gas mask on stilts playing the telecaster throughout the crowd.

4. The Kay Brothers (12/28/19)
Music throughout the Ozarks is completely slept on. Another wonderful Missouri band joining us from Columbia. Also, absolutely wonderful people. Pat Kay, operator of The Blue Note and Rose Music Hall, leads an absolutely wonderful band with his brothers and joined by The Burney Sisters (also from Columbia). Olivia (15), playing acoustic here, is already one of the best songwriters out, and her younger sister Emma (11) absolutely shreds any instrument she picks up. If I am correct, she has been playing that fiddle for less than two years, with a little coaching from Big Smith’s Molly Healey, who is a total badass, as well.

5. Possessed by Paul James (3/13/20)
This past Friday, I had the pleasure of hosting Possessed by Paul James for his second trip through the Saloon. After a wonderful opening set from Willi Carlisle (Oklahoma), Konrad Wert — who performs as Possessed by Paul James — delivered an absolutely wonderful performance. With everyone’s tours being cancelled and impending doom and confusion circling every performer, employee, and customer’s thoughts, this set just seemed to have an added emotional heft that was felt by the small crowd. As of now, I am hoping this wasn’t our final high note for the Saloon, but if it were, I would be a complete stooge if I failed to appreciate this performance, in particular.

Honorable Mention: The River Arkansas (3/7/18)
This was one of those shows with maybe five people in attendance. I did not make the connection when I booked the show, but first song in I thought to myself, “This guy sounds an awful lot like Mike Clark.” Several years ago, my friend Brook Blanche had given me a random album entitled Mike Clark and the Sugar Sounds. I knew absolutely nothing about the band, other than that they had only put out the one album. It was that mystery album we all have that we know little about, but love and play regularly. Sure enough, he introduces himself and the band. New project. It was a happy surprise and a wonderful show.