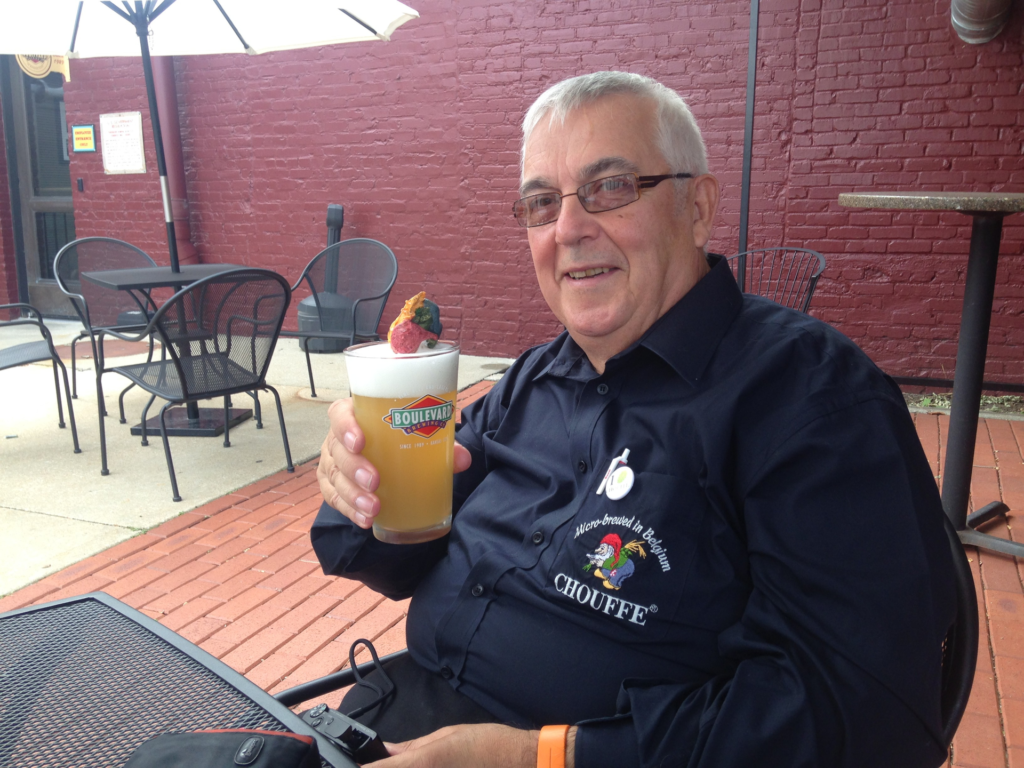 Chris Bauweraerts is in Kansas City for “the world’s smallest toast.” And he’s not alone. He’s brought a small gnome toy that he has named “Marcel” with him.

I meet Bauweraerts on the patio outside Boulevard Brewing Co.’s tasting room. We’re here because Brasserie d’Achouffe, the Belgium brewery that he founded (with Pierre Gobron) in 1982 and sold to Duvel Moortgat in 2006), is now a sister to Boulevard.

“I made the big fish on the hook for Duvel Moortgat,” Bauweraerts says, “but they have to get it out of the water.”

Bauweraerts is still an ambassador for the brewery that he created, so he has made his first trip to Kansas City so he can toast at Chouffe Fest tonight at Barley’s Brewhaus (11924 West 119th Street, Overland Park) between 6 and 7:30 p.m. and then at Lew’s Grill & Bar (7539 Wornall) between 8 and 10 p.m.

Bauweraerts hangs Marcel from the side of the pint glass of Zon, dunking the gnome’s bearded face in the foamy head, and takes a photo with his point-and-shoot camera. Boulevard spokeswoman Julie Weeks and master cicerone Neil Witte snap smartphone photos of Bauweraerts and his gnome.

“You should send it to John [McDonald] in his office,” Bauweraerts says. “Gnomes are drinking.” 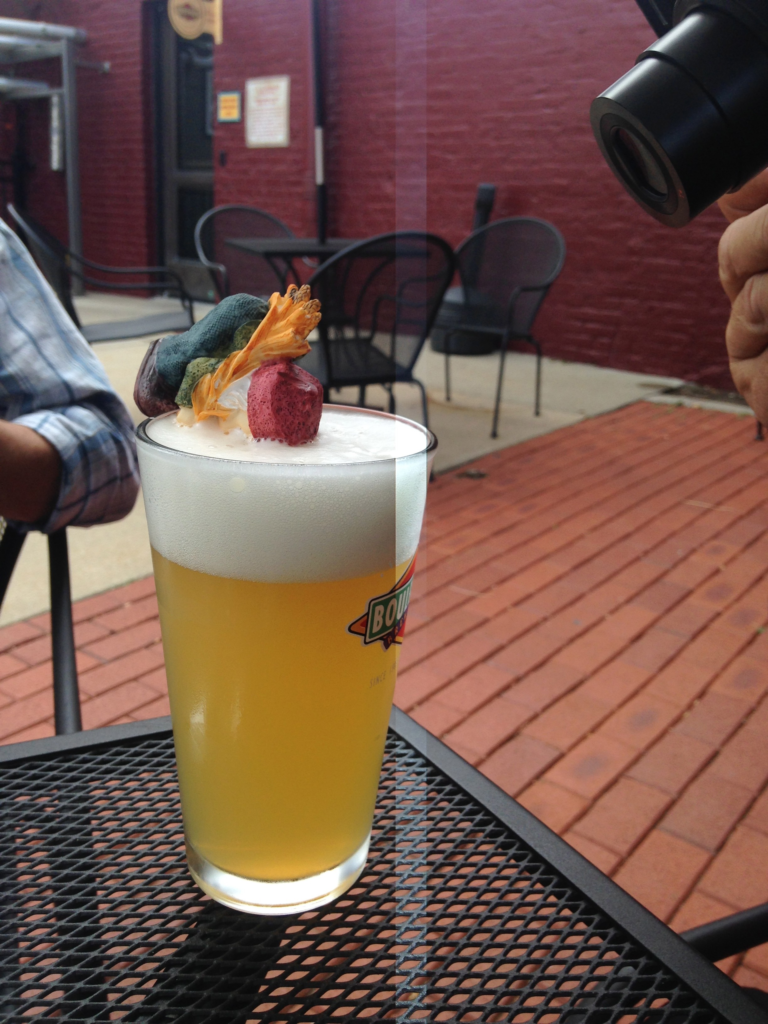 Bauweraerts is happy with the two fingers of foamy head on the beer. He takes a sip of Zon, Boulevard’s Belgian-style witbier and the first beer brewmaster Steven Pauwels created for the KC brewery, while I sample his beers: La Chouffe, Mc Chouffe and Houblon Chouffe Dobbelen IPA Tripel.

I take a sip of La Chouffe, his Belgian strong ale. It’s magical, and I want to drink the whole bomber bottle.

Bauweraerts has also brought along his book, My Chouffe Story, which he jokingly says contains all of the answers to my questions. He’s probably right.

Bauweraerts isn’t a fan of “extreme” beers. He advocates consistency and balance in brewing. His first beer, La Chouffe, was made in 1982. His second beer, Mc Chouffe, didn’t come until 1987. The third followed in 1993.

Bauweraerts Chouffe story started with La Chouffe, his flagship beer, in ’82. He fine-tuned the beer through the years, adding coriander and spice.

As we begin discussing the state of craft beer, Bauweraerts points out that the market in the States is just 7 percent.

“With the quality of beers that we have, we have to think that we can attract the Budweiser drinker, the Miller drinker,” Bauweraerts says.

The answer to attracting those drinkers, he says, is consistency. He points to the quality of Duvel, which started brewing in 1871.

“It’s taken years to improve slowly but steady the quality of that beer,” Bauweraerts says. “You can’t say that with an extreme beer, which new breweries make one every week. That’s not the art of brewing. The art of brewing is consistency, maintain the quality and improve a little bit every year.”

Bauweraerts isn’t a fan of what he calls “extreme beers.”

“I don’t think they go really extreme,” he says of Boulevard and Ommegang.

“We’re making beers for that very small percentage, but at the same time, we’re making beers for a larger amount of people, like our Unfiltered Wheat Beer,” Witte says. “But then we also have beers like our Double-Wide IPA and Mid-Coast IPA that are more extreme and for a smaller group of drinkers.”

“But the Wheat Beer is certainly your best seller, also,” Bauweraerts says.

“Yes, it is,” Witte says. “So we’re trying to appeal to a lot of different groups at the same time. There are some breweries that are just targeting that small percentage of consumers, and they make just the really extreme beers. I think some of the ones that are going to be more successful are the ones that have a broader appeal.”

As we go through his beers, Bauweraerts shares the story of how his “baby,” Houblon Chouffe Dobbelen IPA Tripel, came into existence. He admits that he never wanted to brew it. He says the brewery’s importer wanted a new beer, and he couldn’t say no to his customer. To get out of brewing the beer, he told the importer hat he’d have to order 700 barrels — a figure that he thought would turn away the importer. The guy still wanted the beer.

“If that guy would have never ordered eight containers,” Bauweraerts says, “the beer never would have been made.”

“This is one of the more influential beers in the states, too, as far as one of the first Belgian IPAs,” Witte says. “There are a lot of beers that are being produced in that vein right now that have a very aromatic yeast strain that is very commonly used in Belgium but a lot of hops like an IPA. This here almost created that model for a lot of the Belgian IPAs that you see now.”

“But it’s not overhopped,” Bauweraerts is quick to point out. He says he wants a “soft taste” with all of his beers.

Bauweraerts says he has no regrets about selling.

Bauweraerts says he has known Boulevard founder John McDonald for a “long time — I’m sure before he met Michel Moortgat.” He recalls meeting McDonald in 1997 or ’98 when McDonald traveled to Europe with Larry Bell of Bell’s Brewery for a brewers conference. McDonald asked to tour Brasserie d’Achouffe. Bauweraerts remembers that McDonald went to give him a business card but had run out. So McDonald handed him a couple of Boulevard coasters.

“I keep the coasters for a while,” Bauweraerts says. “It’s a small world.”

Bauweraerts held onto the coasters until he heard that Pauwels, whom he’d known “for at least a quarter of a century,” was working for Boulevard. So he sent them to Pauwels with a note recounting the story of McDonald giving them to him.

“I don’t know if Steven kept the coasters,” Bauweraerts says, “but if he has it, he can sell it on the eBay for a lot.”

Also on tap this week …

Tuesday, September 23
Beer trivia featuring an IPA brewed with locally grown hops and in addition to will be on a hop back of chinook and some wild Mexican hops all grown in Kansas, Cinder Block Brewery (110 East 18th Avenue, North Kansas City), 6-9 p.m.