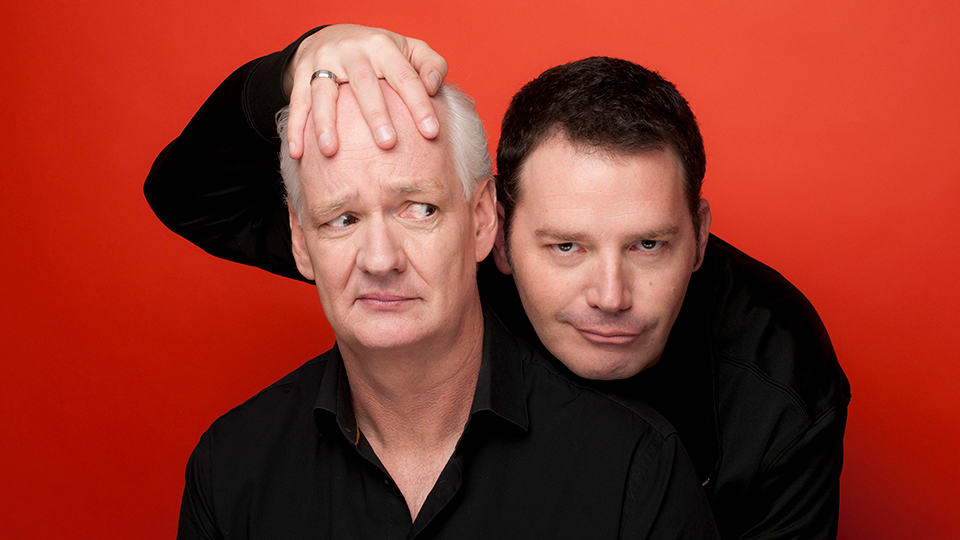 Comedian Brad Sherwood first came to fame doing improvisational comedy for three seasons of the original British Whose Line Is It Anyway?. He then made the jump to the American version of the show when it launched on ABC in 1998. As the host for the three live episodes of The Drew Carey Show, he won greater renown by introducing improv games to the show’s audience.

Since 2003, Sherwood and fellow Whose Line alum Colin Mochrie’s two-man improv show, An Evening With Colin Mochrie and Brad Sherwood, has toured North America, bringing a live audience into the fold for new material every night. It was a pleasure to speak by phone with the quick-thinking Sherwood ahead of his and Mochrie’s appearance at Johnson County Community College’s Carlsen Center this Friday, November 22.

The Pitch: What’s it like being part of what is, essentially, now an institution, with Whose Line?

Brad Sherwood: I always thought that all of us should be in an institution, and now we are, which is great. Being on the show opened up the opportunity for all of us to tour live, which is really the background that we all came from. We all came from doing live improv in groups and Second City and all the different outlets, so really, it’s allowed us to go back to our roots, where we honed our skills.

I find it interesting that, despite the fact that improv has this really bad name, the tours you’ve participated in have been quite successful, which seems to belie the cheap punchline that improv has become in some quarters.

Improv lives and dies with people’s first experience with it, in a sense, so if the first group that you go see in a club or a coffee shop or what-have-you is horrible, you are inclined to never want to go see live improv show ever again. Whereas, if you saw a stand-up that was horrible, you wouldn’t be thinking, “Well, I’ll never go to a comedy club again.” [laughs] It gets whitewashed with whatever your first experience was with it. That’s a hard thing for the art form as a whole to overcome.

The good thing is that the TV show kind of brought an awareness of improv to people, and it became not only a sort of a cult, goofy show to watch, but improv groups sprung up in high schools and colleges, and improv started being taught heavily in drama departments and theater programs. Now, there’s been almost two whole generations growing up knowing what improv is, whereas when we grew up, most people didn’t know what it was. You had to find it.

That’s the biggest legacy that Whose Line has: it’s kind of saturated the country with awareness, and theater departments, drama departments, and precocious kids that want to be actors grow up knowing how to do improv now.

People understand. “Yes, and”-ing is a thing now. What made you and Colin Mochrie team up to perform together in this show, which has been going for over a decade?

Seventeen years, actually. We were doing the show with Drew [Carey] and the rest of Whose Line every year in Vegas. We’d go out there for a weekend and do shows, and it was so much fun to be onstage, doing it live like we all used to do, that I had been doing a two-person show in comedy clubs around the country, and so I approached Colin to do a show. He didn’t have any full-time, live touring stuff going on, so we gave it a try.

One November, we did a two-week run, and it went really well. We realized that we had something going on, to build a show on, and basically, we’ve been doing it ever since. I call it my full-time part-time job. I think both us, having grown up doing live improv, missed that. It’s like a band that might not like going into the studio, but loves touring and playing in front of a live audience.

You did an interview where you said that whether it’s “a great suggestion or a terrible suggestion — it’s our responsibility to make that work.”

That is our job. The audience’s job is to laugh when they think it’s funny, and if they’re not laughing, then generally, it’s going to be our fault. Unless somebody is piping sleeping gas into the theater, or they are all so drunk that they don’t understand the language, then it’s our fault they’re not laughing.

Certainly, you can have an audience that’s a little more effusive or gets some of the odd references that another doesn’t, but really, no comedian should ever blame the audience. That’s what you’re there for. If you can’t take their temperature and figure out what’s making them laugh, then you’re not doing your job.

Given that it’s improv, the audience trusts that you’re quick enough and clever enough to come up with funny material, but you evidently also do stuff with people’s phones? That seems to require an additional level of trust.

Everybody that we bring up is a volunteer, and everybody knows what they’re getting into before they come up on stage. We say, “We need a couple of people with some phones,” and we’ll read dialogue from text conversations that they’ll have, for example.

Do you have recurring segments that give you a rough outline from which to build your show?

Each night, before the show, we write out our setlist for the night. It will comprise of games — some of them like the ones you’ve seen on Whose Line, and other ones that we’ve come up with over the years that work best in a live show, with just two performers, and giving the power to the audience. Because we don’t have a moderator, we don’t have someone that can stop the scene and necessarily push it off in another direction. We have to basically turn the audience into our moderator for all the games that require a little direction.

Sometimes, it’s based on the staging of the theater or the size of the room we’re playing that night, but most of the time, it’s just what we’re feeling. We have enough games that we’ve done together over the years for about three solid shows, so we just pick and choose and start with something that we know is going to get the audience’s energy up. Other than that, the content of each game is completely different.

So, even if we do “Moving Bodies” as an opener in almost all of our shows, we’re bringing up different people, we’re getting totally different suggestions every time, and our dialogue is going to be based on exactly what’s happening in the moment of that scene, so there are never going to be two scenes that are alike, really.

That’s part of why I think I am an improvisor. Back in college, I went and saw a group—I think they were called the Sam Glick Players—and it was three guys. I had never seen improv, and didn’t even really know what it was, and I was just blown away. It was like seeing the funniest comedy show, and yet, it had this element of them doing a magic trick, because it was all made up. In my brain, I was like, “I want to do this!” I was already a naturally funny person—I liked making people laugh—but this was like someone had handed me a new instrument for my repertoire. When I moved out to L.A., I got into an improv workshop, and I’ve been doing it ever since.

So, I’m glad they were funny, or I might’ve become a veterinarian or something. I don’t know.