Braata promises the sounds, smells and feels of the Caribbean but has a way to go 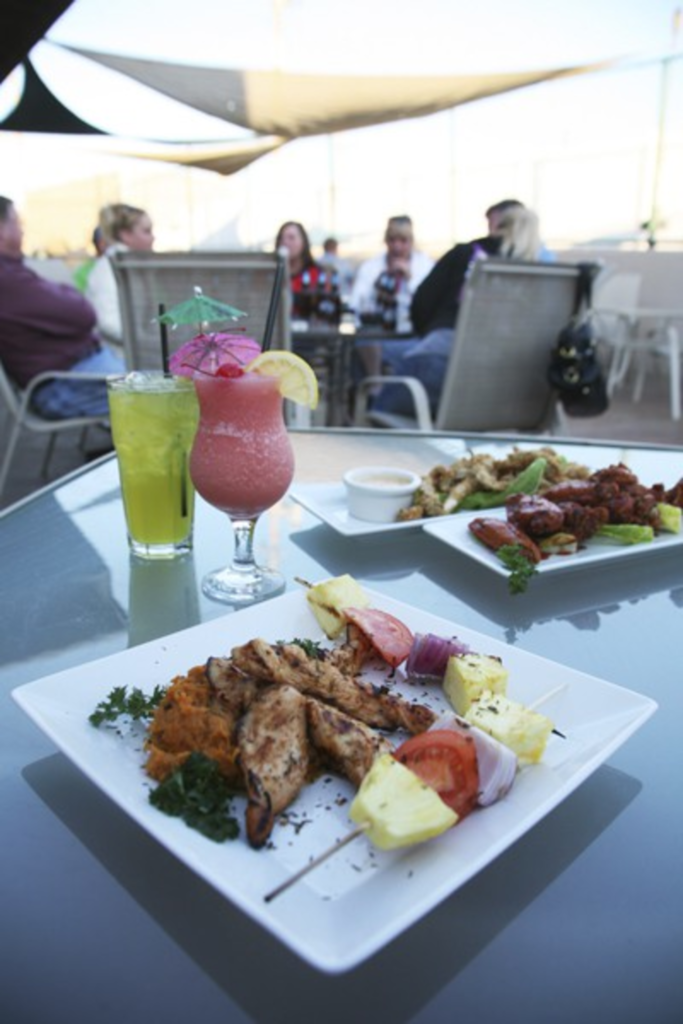 I was having a particularly stressful day last week and I said to myself, You need to get away! You need a tropical vacation on a Caribbean shore! Yes, that’s exactly what I said to myself. But before I dragged my suitcase out of the closet and pressed my swimming trunks and all that, I took a quick look at my bank account. I quickly realized that maybe I was being a bit hasty about a vacation that involved airfare, hotel rooms, cabana fees and actual sand. It might be more economical, I decided, to find a little bit of the tropics closer to home.

And that’s when I thought of Lee’s Summit, that sweet, sun-kissed hamlet just off U.S. Highway 50. A few days earlier, I had clicked on the Web site for one of the newer hot spots in downtown Lee’s Summit, Braata Caribbean Grill & Bar, where I read this enticing description: “Come in and experience the sounds, smells and feels of the Caribbean at Braata Grill & Bar.”

The sounds, smells and feels — I could just imagine the sultry music, the rush of palm fronds swaying on ocean breezes, the fragrance of fresh coconut and just-picked mango, the soothing splash of salty surf. Could such a miraculous getaway really exist, right across the street from the lumberyard? I called a friend of mine who lives in the southeastern suburb to see if Braata lived up to these dreamy expectations.

“It looks like a 1960s VFW hall,” he said. “I went there once and had a cheeseburger and a beer and watched a basketball game on one of the TVs over the bar. It sounded, smelled and felt like any other bar in Lee’s Summit except they do play reggae music.”

Nonetheless, I decided to venture out and see Braata for myself. I even invited two friends, Will and Erin. They also live in Lee’s Summit and had wondered about the little free-standing building on Southeast Main that blasts music out into the street from a couple of well-placed speakers. “We thought it was a Mexican restaurant,” Erin told me, “probably because of the neon Corona Beer signs in the window.”

I arrived early on a Friday night to immerse myself in the tropical ambience before my friends arrived. The place is long, dark and deep — like a VFW hall, all right, with a large dance floor at one end and a well-stocked bar at the other. The tables on the dance-floor side are draped in black linen, while the banquettes are upholstered in a snazzy faux ultrasuede — very tropical Halston.

“It’s been Braata for about 18 months,” the pretty waitress informed me after I turned down one of this restaurant’s signature cocktails: the “Liquid Marijuana.” She went on to explain that several different bars had been in this spot over the years. “It was a dance club for, like, a minute.”

There’s still dancing at Braata but only later in the night, when the “reggae disc jockey” begins cranking up the tunes and the kitchen business starts winding down. “I’m usually gone by then,” the server added.

She left me to look at the menu. Before I left home, I had taken a peek at Steven Raichlen’s The Caribbean Pantry Cookbook. “Caribbean cooking is a patchwork quilt of colors, textures and flavors,” he writes, “a multi-ethnic tapestry woven from the cuisines of Europe, Africa, the New World and even Asia.” This “multi-ethnic tapestry” must be the reason for appetizers such as fried mozzarella sticks, nachos, chicken wings and hummus. I ordered the hummus and fried calamari to share with Will and Erin, who looked completely puzzled by the Braata décor. “What’s tropical about it?” Erin whispered. “And what does the name mean, anyway?”

Braata means “a little something extra” in Jamaican, our server explained. After that, the poor young woman couldn’t answer any other question the rest of the night. She had to run into the kitchen to find out what was in the sweet chili sauce served with the ropy, chewy calamari and, later, what an “ortauique” rum cake was. The answers: an aïoli with a splash of sweet chili paste and “it’s a typo.”

Will and Erin thought the meal was hilarious from beginning to end, which was the most positive way to experience this joint. The hummus was sinfully dry, what little there was of it, although the spoonfuls of tart green-olive tapenade were tasty. The calamari was forgettable; ditto for my bland dinner of jerk chicken Alfredo. The problem wasn’t so much the Alfredo as the bird, described on the menu as “specially seasoned chicken breast.” Most recipes for jerk seasonings, including Raichlen’s, call for a variety of hot peppers, allspice, cinnamon, cloves and coriander. But the Braata chicken was flavorless, except for the blackened grill marks.

My dining companions thought the highlight of the meal was “love puddin’,” a sexy-sounding variation on bread pudding that I can only describe as two heart-shaped slices of fried bread pudding topped with a duet of maraschino cherries. “Very French toasty,” said Erin, who liked it. One bite was enough for me.

I returned for another dinner with my friend Taylor. The food was much better, the service much worse. Though the dining room wasn’t all that busy, our waitress had zero sense of timing: Salads arrived before we finished the starters, dinners were delivered before we’d had three bites of salad, and she put the check on the table well before we’d finished the meal.

“Do you feel that we’re getting rushed out of here?” Taylor said.

Yes, and it was too bad, because I was actually enjoying the experience this time. Quesadillas were stuffed with grilled chicken, Cheddar cheese and mango sauce, while the fried chicken wings arrived slathered with a fiery chili sauce. Little house salads were a pretty jumble of mixed greens and crunchy croutons, but the server stammered when I asked if the dressings were made in-house (the Web site claims, “Most everything on our menu is made from scratch”) and ran back into the kitchen to ask. “No, we don’t make them here,” she said, perturbed that I kept asking questions about the food.

“I suspect that the cuisine is less important than the booze,” Taylor said. He had considered ordering a Bahama Mama before dinner but decided against it. “Sometimes exotic cocktails make me act a little paranoid,” he said, “and I already feel that the old lady with the walker over there is staring at me.”

Meanwhile, I was enjoying the Marley more than I thought I would — a wheat tortilla wrapped around black beans, grilled chicken, fresh pineapple and jalapeños, it didn’t really need the extra blanket of melted Cheddar. Taylor loved the 8-ounce grilled Kansas City strip, dribbled with melted blue cheese; I thought it was a little tough. “Maybe that’s how they like it in the Caribbean,” he said, huffily. The garlic mashers were great, though — and hot.

“You didn’t want dessert, did you?” the waitress asked, handing me the check.

“She’s kind of a spoiled Braata,” Taylor whispered. No, the server was actually attentive and very nice; she just needed a little extra training. Or a vacation.