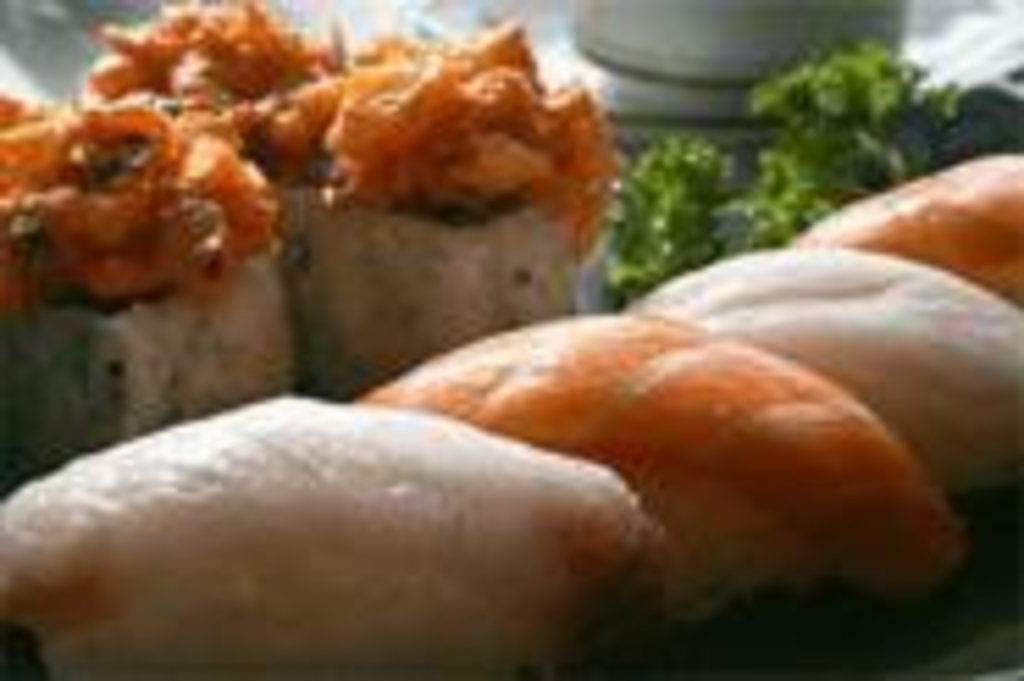 Last autumn, I received an e-mail from a reader who’d had a little culinary culture shock after moving from Kansas City to Portland, Oregon. “One of the new food items that has intrigued me and my fiancé is the bento. Boy, did I feel like a true Midwesterner. They’re everywhere out here. And if you don’t know what they are, you receive the ‘you’re definitely not from here’ look. Ever heard of it?”

Well, yes. Several local restaurants serve food in bento boxes, including Jun’s Japanese restaurant at 76th Street and State Line and Choga Korean Restaurant at 105th Street and Metcalf in Overland Park. But I believe the first venue to add the word bento to its name is the 7-month-old Friends Sushi & Bento Place. Don’t worry, the cheery owners of the restaurant, Paul and Lilly Zhu, won’t give you a “you’re definitely not from here” look — whatever that is — if you confess to not knowing the difference between a bento box and Benton Boulevard.

In Japan, an o-bento (sometimes spelled obento) is a packaged meal, sort of like the American lunchbox. It can be an actual box-shaped container, with two or three stacked layers, or a lacquered wooden box with separate compartments. Think of it as a prettier version of a TV dinner tray. The Unofficial Guide to Ethnic Cuisine & Dining in America describes the bento box as a traditional lunch container, holding “four or five dishes, with rice as the mainstay — perhaps a couple of shrimp tempura, a little sushi, a little yakitori and some pickles.”

At Friends, the bento is available for both lunch and dinner in seven incarnations, including a vegetarian version and an all-sushi affair. I was up for one the night I went to dine at the restaurant with Lorraine and Cynthia. “You don’t think of sushi as a neighborhood restaurant,” said Lorraine, even though she lives a block away from the multinational dining community on 39th Street known as Restaurant Row.

But sushi, practically a culinary novelty in the Midwest until the 1980s, is now becoming as familiar to local diners as General Tso’s chicken and pot stickers. Case in point: A new sushi joint is opening in Brookside later this year, and you can buy prepackaged nigiri and maki at Cosentino’s Brookside Market. Another midtown dining hub, Westport, has two venues serving sushi, Matsu and the Fuji Japanese Steakhouse. The latter is owned by John and Lina Tai, who are not only related to Lilly Zhu but also employed her as a waitress for several years. That’s how she got the inspiration to open her own sushi shop.

“Japanese food is very popular right now,” Lilly told me. Both she and her husband, Paul, are natives of Shanghai, but neither considered opening a Chinese restaurant. Lilly’s background is in Japanese cuisine: “My family owned a Japanese noodle shop in Shanghai,” she said.

Noodles have their place on the Friends menu. There’s sukiyaki, a seafood concoction called “Ocean’s Twelve,” and a traditional Japanese soup that doesn’t even have a name that translates to English — it’s listed on the menu in Japanese script only.

There was also a menu item that I had never seen offered in any restaurant: “cheese cracker.” I had a momentary flashback to the neat square of Velveeta on a saltine that was one of my mother’s questionable “healthy snacks” from the 1960s. At Friends, Lilly explained, a cheese cracker is more like crab rangoon. True, it’s a cheese puff, but without the illusion of containing “crab” (which I maintain is a mythical ingredient in most local versions of rangoon). That night’s appetizer special, a salmon cracker, was definitely filled with salmon, but it didn’t look like either a rangoon or a cracker. It looked like a cigarette: a thin, crispy wonton tube filled with steamed salmon. Very tasty.

Cynthia and Lorraine love sushi, so they spent some time poring over the dozens of selections on the sushi list before finally agreeing on mackerel, eel, yellowtail, a daikon roll and “crab stick” (we were assured it was real crab, though the sushi chef got flustered when I asked the same question on the way out). Lorraine also wanted to sample the Shanghai udon noodles, which she ordered, too.

I hadn’t eaten anything called a “pork cutlet’ since I last dined in my high school cafeteria, so I was slightly stunned when the shiny wooden tray arrived. It was terribly pretty, almost like a jewel box. Each of the six compartments on the tray boasted some dainty edible thing: a little jumble of salad, a mound of white rice, a cheese cracker, two orange slices, a few grapes, and an egg roll with a thick and chewy wrapper. And right there, in the left-hand square, sat a very institutional-looking breaded pork patty, neatly sliced. It was a dead ringer for the high school version.

That wasn’t necessarily a bad thing, because I like almost anything fried. But a pork cutlet is boring in any language, as far as I’m concerned. Lorraine and Cynthia cast a wary eye at my dinner. “It doesn’t look that exciting,” said Lorraine, dipping a piece of tuna nigiri into a tiny dish of soy sauce. The two had dined at Friends before, and they insisted that sushi was the real draw. “The food looks brighter and tastes fresher here,” Lorraine said. “And the service is so friendly.”

Well, it would be a paradox if a restaurant called Friends had the same brusque, unsmiling servers as one of its better-known sushi-serving rivals. The name of this little sushi shack actually comes from the group of friends who started the business. “We all work here,” Lilly said.

Because everyone was acting so friendly-like, I felt comfortable enough to reach across and snag a couple of pieces of sushi from Cynthia and Lorraine’s side of the table. The yellowtail and eel tasted fresh and succulent, and I loved the pretty daikon roll, a crisp combo of tuna, yellowtail, salmon and cucumber in a translucent daikon-radish sheath. Lorraine was less enthusiastic about her bowl of Shanghai udon. It looked comforting enough: thick ropes of doughy noodles in a mildly seasoned broth criss-crossed with kebabs of grilled chicken, beef and shrimp. “It’s too bland,” Lorraine said.

For dessert, Lorraine wanted a “Big Mouth,” a kind of ice cream sandwich made with two delicate rice cookies stuck like clamshells to both sides of a small scoop of ice cream. She barely touched it. “The last time I came here, it had chocolate ice cream,” she said, wrinkling her nose. “This time it had green-tea ice cream.” I’m not a fan of that unique, subtle tea flavor myself, so I indulged in a mochi, a ball of chocolate ice cream wrapped in a chewy wrapper of rice pastry dough. The texture was almost indescribable — ice cream encased in a condom comes to mind — and not particularly tasty.

I came back a few days later for lunch with Sophia, who once worked in a Chicago sushi restaurant. I asked her opinion about sushi’s burgeoning popularity, especially among the under-30 demographic. “Well, it’s pretty exotic when you’re used to eating hamburgers,” she said. “But then you get used to eating sushi and it gets boring, too.”

It’s an interesting theory, but I have my own: Most baby boomers inherited their parents’ latent fear of eating anything raw, especially fish. The perception persists — in the Midwest anyway — that the only “fresh” stuff is locally caught catfish or trout, even though technology has made shipping frozen seafood safe. Younger diners don’t have that fishy emotional baggage to taint their palates.

I know otherwise adventurous eaters who still turn up their noses at sushi. But they usually don’t like other staples of Japanese cuisine, either, such as miso soup, made with fermented soybean paste. I love the stuff and happily slugged down a small bowl of the cloudy broth, which came speckled with bits of green onion and chopped kombu. It fortified me until my Kang Ba beef stew arrived. It wasn’t a stew in the American sense of the word; rather, it was more like an old diner specialty: slices of excellent, fork-tender beef smothered in brown gravy and served with white rice, sliced tomatoes and steamed bok choy. It was like a terrific blue-plate special.

Sophia wanted only sushi and used her chopsticks skillfully and elegantly to pick up the firm little rice mounds draped with sleek strips of fresh salmon and yellowtail. I insisted that she order a Kansas roll, if only to see whether it was intelligently designed. It was beautifully composed: bite-sized circles of nori-wrapped avocado and spicy crabmeat, each adorned with a spoonful of tiny, topaz-colored masago, that pretty Icelandic caviar that just says “Kansas” to me.

Sophia liked the sushi so much at Friends that it wouldn’t have occurred to her to order a bento for lunch instead. I wouldn’t mind alternating the two. After all, with such an interesting menu, I wouldn’t want to be, you know, boxed in.