Why is it getting retired? Why?

“Because you didn’t buy enough,” Pauwels tells me. He laughs.

Last year, I told Danner that I was worried about Long Strange Tripel. I’d watched as Zon, a Great American Beer Fest gold-medal winner, was put out to pasture. (Boulevard ended up resurrecting it as a Midwest-only release.) I tell Pauwels that I’m now atoning with recent beer buys at Cosentino’s, and ask for a reprieve for an old friend.

“I’m sorry,” Pauwels says. “We have so many ideas and so many different beers that at some point you just have to say, ‘Sorry, one has to go.’ ”

“It’s a mystery,” Danner says on why LST didn’t work. “That beer has a beautiful label. It has an amazing story. The name is cool, and it’s a great beer. I just never understood it.”

The beer was a tribute to Boulevard’s longest-tenured employee, Harold “Tripp” Hogue, whom you can still find working at the brewery.

So who broke the news to Tripp?

“I did,” Pauwels recalls. He remembers stirring tea in Hogue’s office, when the beer’s namesake asked, “It’s going away, isn’t it? Why?”
Pauwels motions that his stirring speed increased tenfold.

“I promised him, it’s just for now,” Pauwels says. “You never know. It might come back, and we’ll work on it. But we have it on draft here [in the beer hall]. So we’re going to try to do that and keep bringing it back now and then here on draft.”

“Probably not,” Pauwels says. “We just love it all too much. It’s one of our favorite beers.”

Another Boulevard headliner is also on the way out: Chocolate Ale. Pauwels describes the brewery’s relationship with the beer as “love-hate.”

“It was so crazy the first couple of years we made it, and we got really excited and started making a little too much,” he says. “It was like, ‘We can make more, let’s do it.’ And then the bottom fell out, and we tried to revive it with raspberry.”

The addition of raspberry to the once sought-after seasonal — a nod to one of chocolatier and collaborator Christopher Elbow’s finest candies — wasn’t the saving grace the beer needed.

“That’s what we tried to make, and it got lost,” Pauwels says of re-creating in liquid form a chocolate-raspberry candy. “Totally lost.”

He adds: “I was wrong. We were both wrong. Sometimes you just go one step too far.”

Those who detected a difference between the Chocolate Ale served on draft and the beer in bottles were right (because of bottle conditioning). The answer to closing that gap is a new filler for 750-ml bottles.

So … Chocolate Ale is also gone but not gone?

“We never say a beer is done-done here,” Pauwels says, “because they all seem to resurrect. I’m just waiting until someone says let’s make Tenpenny again, because I know it’s going to happen.”

“I think the time of pumpkin beers has passed,” Pauwels says, “and we see a lot of times that we call it the sophomore year is kind of the make–or–break year for beers for us.”

“Dark Truth Stout is like an entry-level imperial stout,” Pauwels says. “It has its own character: Belgian yeast, more fruity, less roast character, more rounded, in my opinion. But it’s not really where it needs to be. People just don’t pick it up. Entry level just doesn’t work, from what we see.”

Boulevard fans might also notice that Rye-on-Rye isn’t on next year’s schedule. But don’t worry about that beer’s future.

“We took it out on purpose,” Pauwels says. “I couldn’t guarantee that we could make that beer year-round. I probably wouldn’t be able to get the barrels.”

The idea is for Rye-on-Rye eventually to join Bourbon Barrel Quad and Imperial Stout as year-round Smokestack beers in four-packs of 12-ounce bottles, the latter of which will be going year-round next August. Rye-on-Rye is likely to return in 750-ml bottles in 2018.

“I’m pretty sure it will, because it has a great following,” Pauwels says. 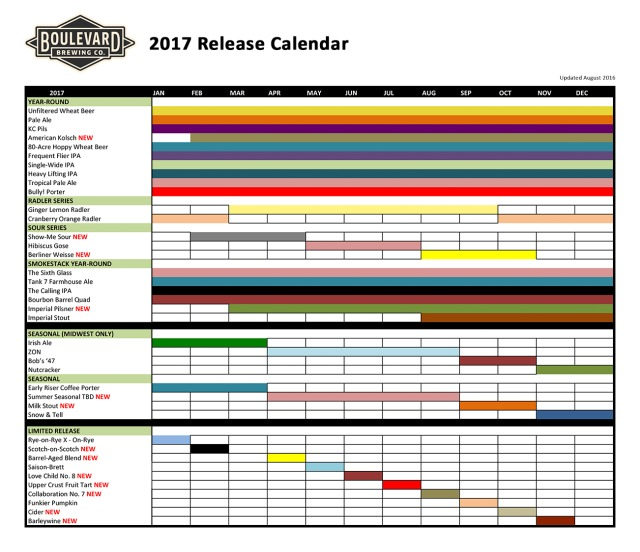 Which brings us to the 2017 calendar. A highlight for me is the release of Rye-on-Rye-on-Rye in bottles in January. (This year’s version was draft-only.)

“I have to figure out how to make it happen. I don’t know yet,” Pauwels says of bottling the beer.

“The concern is that the ABV is so high that if it didn’t bottle condition, you’d have this flat 14-percent beer in 750-ml bottles,” Danner says.

“We have to figure it out,” Pauwels says.

Pauwels is excited to start a “Sour Series” of beers. Show-Me Sour, the collaboration beer brewed with St. Louis’ Side Project Cellar for last year’s Boulevardia, joins a rotating lineup with a February-through-April run. Also in that series is Hibiscus Gose (May through July) and a Berliner Weisse (August through October) that is a take-off of this year’s Boulevardia collaboration beer with several local breweries.

Pauwels recalls discussing the Show-Me Sour recipe with Side Project’s Cory King before that year’s Craft Brewers Conference. King told him he wanted to use dark malt and make it black. Pauwels left the conversation feeling good, joining a panel discussion. The first bit of advice from the panel: “Don’t try to make a black sour beer.” Pauwels remembers thinking, “What the hell, Cory?”

“I think it works,” he says of the beer, which is barrel-aged, soured and black, creating what he calls a “round caramel and cocoa flavor.”

“I was surprised how many people were like, ‘I need to buy this beer,’ ” Danner says. “We made this weird, dark, barrel-aged sour beer, and people loved it.”

As for the Berliner Weisse, Pauwels jokes, “We tried to make it as Reinheitsgebot as possible for the KC Bier guys. We failed, I take it. It’s still a work in progress.”

In March, brewery founder John McDonald gets his way with a new-to-year-round Smokestack addition: Imperial Pilsner.

Pauwels recalls McDonald saying in a meeting, “I want you to make Collaboration No. 1 again.” “We were like, ‘OK, John. We will,’ ” Pauwels says. “So that was it. He’s the man with the vision. We believe in him.”

Who knew a traditional Scotch beer would do so well? So here comes a Scotch beer aged on Scotch chips.

“Last year, when we put Snow and Tell out, that was, like, really an afterthought for us,” Pauwels says. “People were so crazy about this beer.”

The Barrel-Aged Blend will chase “the perfect blend” of beers in Boulevard’s barrel-aging program. “This was more free flowing” than this year’s Collaboration No. 6 blend of Boulevard and Firestone Walker beers, Pauwels says.

“When I looked at our portfolio as a whole, you look at: Where are the pockets of things that we are not playing in or we’re not good in yet? And fruit beers is kind of a big gap for us,” he says. “There are some beers where we’ll add some fruit to it, but they’re not really fruit beers. So I thought, maybe it’s time to make one of those fruit beers.”

The release of a cider is in the cards because a brewer at Boulevard owns an apple orchard. The cider is already available in the beer hall.

“We’re too late for the cider game,” Pauwels admits, “but we think it’s fun just to do it.”

A work in progress is Boulevard’s Barleywine — a suggestion from the sales team, who saw a window of opportunity.

“It will be American-style, definitely,” Pauwels says. Think along the lines of Sierra Nevada’s Bigfoot. with its hoppy character. “This was just a first attempt. I’m not worried about that one yet. I will be next year.”

Also new in 2017: American Kolsch joins the year-round can lineup in February. And joining the seasonal lineup are a yet-to-be-determined summer beer, April through August, and Milk Stout from September to October.

And that’s not all.

“I’m excited about some things that aren’t on there,” Pauwels says. “They’re just way too early to talk about. There will be additions. I hope that we’re going to be able to make all of it.”

Coming much sooner is another fresh-hop beer, with local hops.

Further into the future, likely in 2018, is a canning line.

“It’s just the right thing to do to bring them back home and invest in the can line,” Pauwels says. “The biggest issue is that we just don’t have space. We have to put a building up and do it right. We see it with Radler — and whether you like it or you hate it, it’s one of those beers that’s really pulling the wagon for us right now. We have to do it right. It’s becoming a big part of our portfolio.”

Meanwhile, Boulevard is nothing if not restless.

“We have to keep innovating,” Pauwels says. “We have to stay relevant also. Those are kind of hollow words, but, for instance, without Tank 7, this brewery wouldn’t be what the brewery is today. Every year, I think we bring at least one beer to market that’s really doing well. Tropical Pale Ale this year is doing very, very well. Better than we expected. The year before was Radler, doing way better than expected. Same with the Calling the year before. Every year, we have at least one brand that we can build on and keep going.”