Today, we received a first look at Boulevard Brewing Co.’s 2017 schedule, and my first impression is this: There are a lot of new and exciting beers on here.

My second impression: A few old favorites are going away.

Let’s start with the new. Those of us who have been to Boulevard’s new beer hall will recognize a chunk of the new brews, starting with the American Kolsch that joins the year-round can lineup in February.

Show-Me Sour, the collaboration beer brewed with St. Louis’ Side Project Cellar for last year’s Boulevardia, joins a rotating “Sour Series” with a February through April run. Also in that series is Hibiscus Gose (May through July) and a new Berliner Weisse (August through October).

New to year-round Smokestack lineup is an Imperial Pilsner with a March start date.

A yet-to-be-determined summer beer (April through August) and a Milk Stout (September to October) join the seasonal lineup. I’ve tried the Milk Stout (at the beer hall, of course), and it’s good stuff.

Finally, the limited-release lineup is full of newbies, including Scotch-on-Scotch (February), Barrel-Aged Blend (April), Love Child No. 8 (June), Upper Crust Fruit Tart (July), Collaboration No. 7 (August), Cider (October) and Barleywine (November). I’ve had the Barleywine at the beer hall — it’s a sweeter English-style beer — and I welcome the official release.

Also of note, unless I’m reading this wrong, Rye-on-Rye X — On-Rye is returning in January. Please, never stop making Rye-on-Rye-on-Rye, Boulevard. Imperial Stout is moving to a year-round release beginning in August. (We already knew Bourbon Barrel Quad was going year-round, starting this October.) And Zon’s stay of execution seems to be intact with an April through August release in the Midwest only.

Now, the bad news. Last year, when Boulevard released its 2015 calendar, I joked with ambassador brewer Jeremy Danner that I feel compelled to buy a 750-ml bottle of Long Strange Tripel every time I go to the store. To me, LST didn’t get the love from consumers that it should have — and it’s a beer that I most certainly adore. Well, I should have bought more. We all should have bought more. LST, the beer named for Boulevard’s longest-tenured employee, Harold “Trip” Hogue, is headed for retirement.

Funky Pumpkin seems to have dropped off the seasonal-release schedule, but Funkier Pumpkin remains on the limited-release lineup for September.

I’ll have more on the 2017 schedule after I meet up with Danner in the next few weeks. Here’s a look at the schedule. 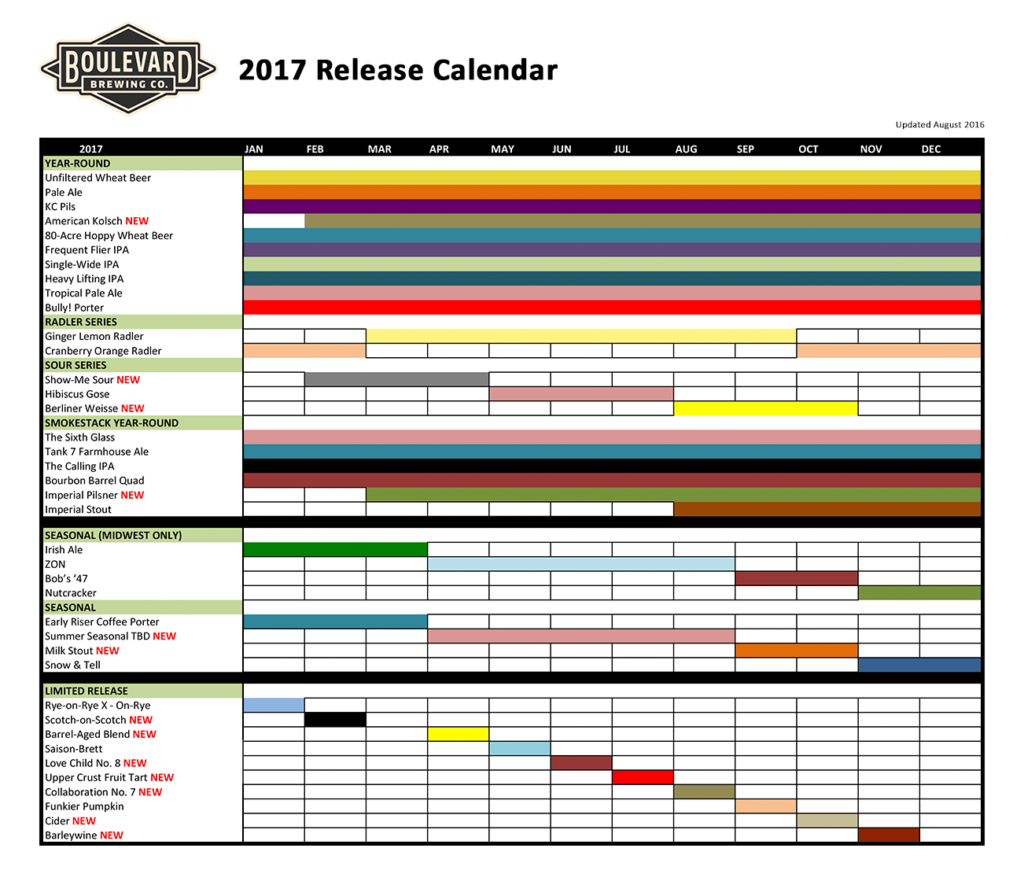