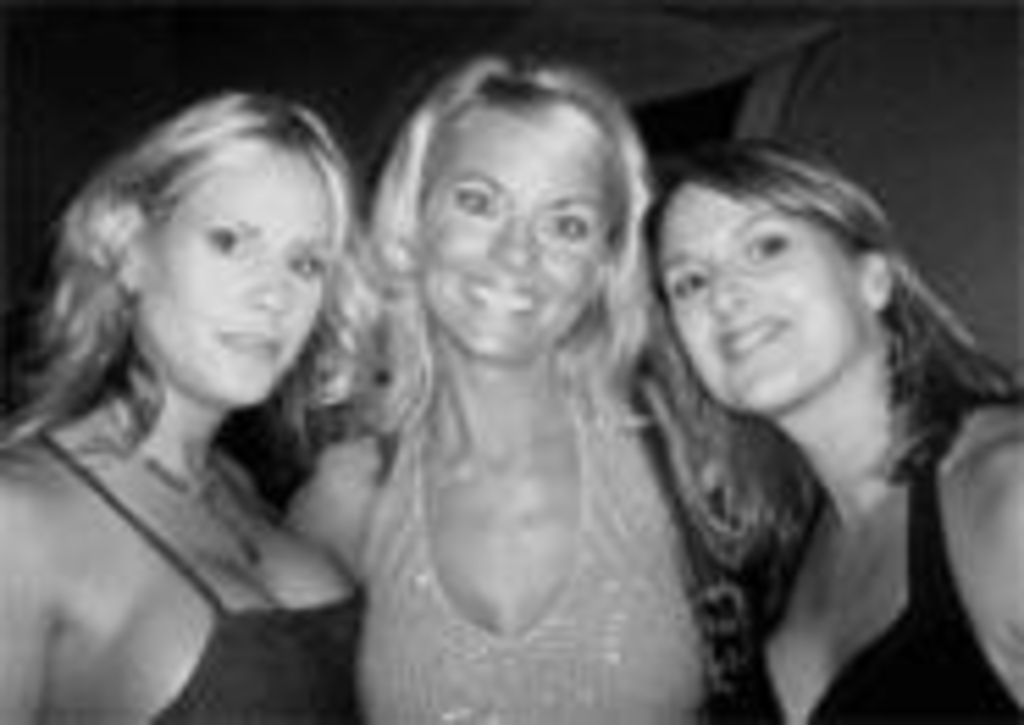 After all the hype, we had to check out the Drink, the newly opened club in what we like to think of as that doomed building that used to house Segafredo and Trattoria Luigi. We went with a slew of Research Assistants over opening weekend, and everyone agreed on one first impression:

Take the same plastic-fantastic type of crowd and the same red décor, and that equals the same feeling of indifference we had toward its predecessor. Nice balcony, though. So, yay.

On the other hand, parking is a bit dicey in that area. When we pulled in, a nice security guy informed us that the lot was full. He said we could park in the garage by Capital Grille and a courtesy limousine would shuttle us up the hill. Prom limo? Well, we couldn’t resist that, so we headed thataway. As we waited, an assholic silver Audi convertible peeled out of the Cap Grille garage, swerved and nearly ran over two chickies teetering on the road near us. We collectively gasped, then recoiled again when we noticed that in the front seat, a dark-haired, possibly middle-aged woman was straddling a man in the passenger’s seat.

“Jesus!” we exclaimed to the valets. “What was that?”

“Happens all the time,” one said. “Degenerates hang out here.”

The night suddenly got more interesting.

After we arrived at the Drink, we hoped to catch a glimpse of additional sordidness. We were soon rewarded. We had made our way into the basement, a cool lounge area where a DJ spun and, as a special bonus, the small bar wasn’t crowded at all. An interesting array of characters filtered in — the scenesters we see at every club, the striped shirts and the hootchedout chickies. Then we spotted the threesome: a middle-aged triad sitting on the red circular sofa. The guy sprawled out while the women took turns rubbing on him and each other. Of course, we were dying to know who these people were, so we made our approach.

“Excuse me,” said the Night Ranger to Casanova. “Has anyone told you that you look like Joe Namath?”

“Is that a compliment?” Joe Jr. asked.

“Oh, sure,” the NR replied before asking if she could interview the trio. Joe Jr. deferred to Grinder 1, a striking dark-haired, blue-eyed, tanned woman in a metallic gold tank top that revealed a taut stomach. She resembled an aging early-’80s supermodel.

“No,” she said abruptly, then turned away. Damn it! We totally forgot the rules of Column Writing 101: Try to get asked to be in a foursome, then pull out the notebook.

We went up to her target, Jared, 25, and asked what she said.

“‘You look like Trouble with a capital T. And I’m looking for trouble,'” he said.

“What did you say back?” we excitedly asked.

“I didn’t know how to respond,” he said. “How do you respond to something like that?”

Um, hello, Jared. Everyone knows the only response to the “Trouble with a capital T” line is: “That rhymes with P and stands for pool.” We let that slide, though, and continued to chat with him and his pal, Josh, 25. We first noticed them because of their dissolute air; they strolled in, all pouty-mouthed with artfully mussed hair and wooden-bead necklaces. They casually scoped out the place before settling on the black leather sofas. Soon, Jared had a Friend With Benefits on his lap, so we went over to offer our wingman services to Josh.

“I don’t need a wingman, but I do need a wing reporter,” he said. Right on! We asked who he wanted to hook up with in the basement, and he pointed out a slim chickie with a blond bob, a black halter and tan pants. We asked why she appealed to him.

“Well, she’s every guy’s style,” he said. “She’s got the blond hair, blue eyes … and she’s obviously looking to hook up.”

“Really? What’s an indicator that a chick’s just looking to hook up?” we probed.

“Well, a dead giveaway are the titties,” he replied. “When they’re all done up and pushed together — a girl doesn’t do that on accident. They’re crammed together on purpose. That’s my theory, anyway.” It was at this point when the Night Ranger looked down at her own rack, which was on display for all to see. Well, apparently that wasn’t getting us anywhere in the basement, so we wandered around the other floors, where we saw KC’s version of Hugh Hefner — a less-suave model with white hair and a powder-blue blazer surrounded by blondes pushing (gasp!) 39. We also had to go up to another guy and ask, “Has anyone told you that you look like Rod Stewart?”

“Why, yes, they have!” said Foto, 56, who seemed pleased with our reference. Yes! Score one for the NR.

As much as we were enjoying our faux-celeb-spotting game, we soon heard the implausible rumor that Alec Baldwin was in the house. Granted, the rumor came from a friend of one of our RAs, but it seemed plausible because (a) the Friend of RA had been on the third floor for most of the night, and that’s where the VIP rooms are located, and (b) we’d heard that Billy Baldwin was in town filming a movie. Confusion soon reigned as we debated which Baldwin brother was on the premises. We finally decided there needed to be less talk, more rock (which, incidentally, is the motto taught in Reporting 101) and went up to investigate. No Alec (or non-Alecs). We infiltrated two of the VIP rooms with ease but encountered a bouncer standing outside the third. He told us that the room had been rented by a bunch of Brazilians and no Baldwin was in there, either.

Well. If a minor Baldwin isn’t in the house, then we’re having none of that. We took our leave and headed back toward the Plaza, where we’d at least run into a Chiefs player. Or a degenerate, if we were lucky.