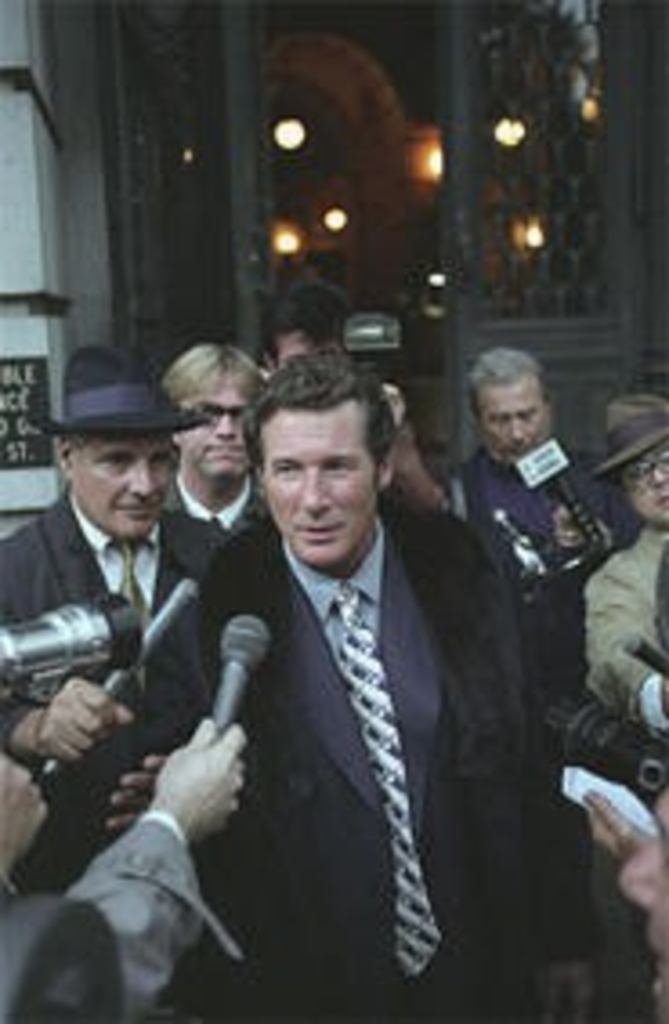 Lest we imagine that the publishing industry went to hell only after James Frey and J.T. Leroy clambered onboard, here comes Lasse Hallström to remind us of a literary dustup emblematic of a much earlier nadir for American mendacity. The Hoax parses the rise and fall of faker Clifford Irving — a stalled minor writer who shot to fame when he claimed to have been approached by the notoriously reclusive aviation billionaire Howard Hughes to write his memoirs — as a symptom of that other lying decade, the 1970s.

The Hoax is strongest when it connects the dots between Irving, played by a wonderfully shifty Richard Gere, and a freshly corporatized book industry. In some of the film’s most delicious scenes, glassy-eyed McGraw-Hill editors and management types are seen trying to balance their skepticism for Irving’s ludicrously transparent whoppers with their longing to sign up a massive best seller.

Richard Nixon appears in grainy archival footage as a murky figure in Hughes’ memoirs and, by extension, as the top-down polluter of the culture that, according to the movie, made Irving’s sensational 15 minutes possible. Still, it seems a bit much to hang this entire paranoid age — Vietnam, Watergate, corporate greed, celebrity mania, pointy collars — on a man who cuts no more charismatic a figure than Tricky Dick. William Wheeler, who met with Irving and based his own lavishly embroidered screenplay on the author’s post-prison memoir of the affair, found the man affable but “unreadable.” That’s the classic demeanor of the successful con man, who must be winning and elusive at the same time. Gere is a skilled actor with copious experience playing men of fishy motive, but his Irving doesn’t seem capable of pulling off the extravagant stunts that kept alive a seven-figure book deal.

Like all con artists, Irving is a man without a moral core, which is what makes him both seductive and a dangerous betrayer of all those around him, including his good-hearted accomplice (Alfred Molina) and his endlessly forgiving wife (Marcia Gay Harden). But the filmmakers can’t commit to a full-blooded scoundrel. They want us to like Clifford more than judge him, so they invest this vaporous fraudster with guilt about his serial betrayals. The most colorful thing about Gere’s Irving is his dream life, which makes him no different from the rest of us.

To its credit, The Hoax doesn’t chalk up Irving’s moral vacuum to a damaged childhood. But there’s no other point of view, either; the film suffers a fatal equivocation over whether to frame itself as a caper or an American tragedy. One hankers for the antic joie de vivre of Steven Spielberg’s Catch Me If You Can, which gave itself over to what we love about the con men who dare to slough off the daily grind. They have style to burn, and they don’t give a damn.