Books to distract you when you need distracting 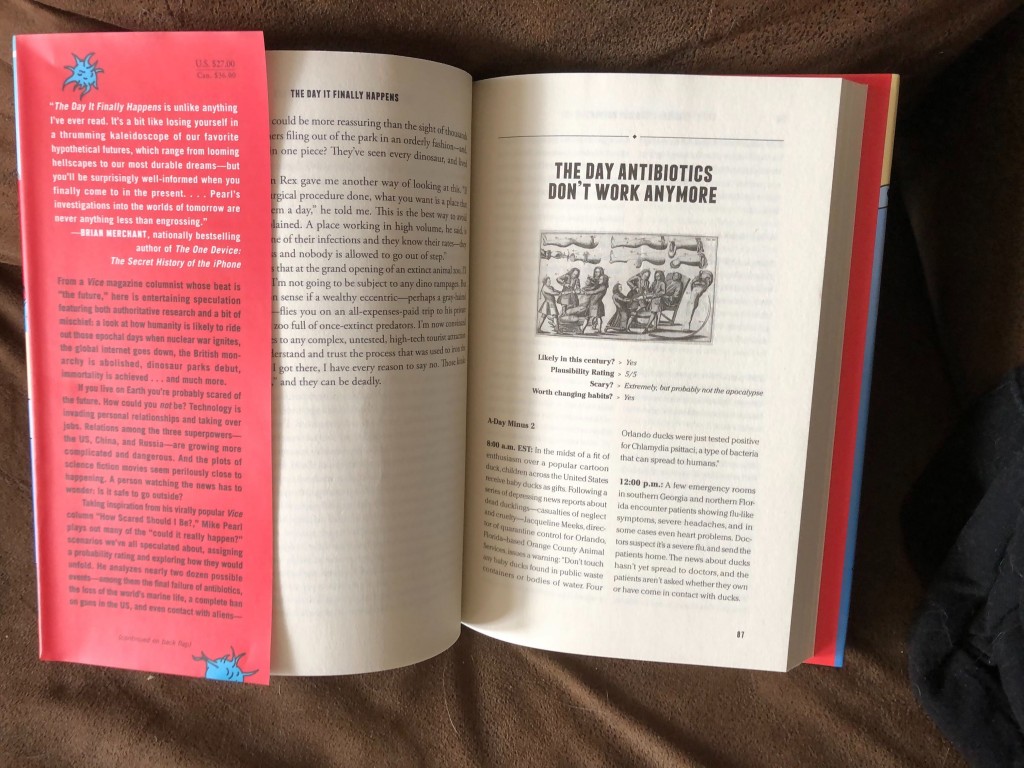 From a book about various apocalypses. This book is not on the distraction list. // Photo by Brock Wilbur

Right now, the world seems to be hovering somewhere between dystopian and apocalypse. Want to take your mind off the crippling fear that brings with it? Try a book that’ll draw you in so much with its world or narrative that you’ll forget about the virus people are confusing with a type of beer.

“Fangirl” by Rainbow Rowell
That first semester of college is tough, and no one knows it better than Cath. She doesn’t fit in, and the adjustment is so brutal that she turns to the thing that’s gotten her through hard times before—fan fiction. Writing about Simon Snow, this world’s version of Harry Potter, is the perfect escape, and the people who read her work online love it. Eventually, Cath’s real-world needs some attention, however. This tale will suck you in just the way fan fiction draws Cath away from her actual problems, and you won’t even notice that it’s more than 400 pages. Plus, if you really love it, Rowell followed it up with “Carry On,” a tale about the fictional Simon Snow.

“The Unexpected Mrs. Pollifax” by Dorothy Gilman
Picture the senior citizen you love best. Now try to imagine him or her rocking up to the CIA and asking for a job as a spy. That’s what starts off this Cold War-era tale that’s lighter but no less interesting than a le Carré tale. Sixty-something Emily Pollifax leads you on an adventure that starts with a simple information drop in Mexico City and ends somewhere in the Adriatic. She raises the eyebrows of a grizzled espionage veteran and puzzles her antagonists. Her unconventional approach to just about everything keeps everyone off balance and keeps you sunk into the story. It’s the start of a 14-book globe-trotting series that could keep you busy for a while.

“The Day the World Came to Town” by Jim Defede
If you saw “Come From Away” when it hit the Music Hall last month, you’ll know the basic story of the 38 airplanes that diverted to a small town in Newfoundland of September 11, 2001. This book takes many more personal accounts of the passengers, airline workers, and townspeople and weaves them into a story that has you on the edge of your seat waiting to see how it turns out for them. A major strength of this tale is that it feeds you pieces of each person’s story mixed together chronologically, so it’s like you’re living it with them. Those of you who are old enough to truly remember those turbulent weeks might find yourselves tearing up a bit with some memories.

“Surely You’re Joking, Mr. Feynman: Adventures of a Curious Character” by Richard Feynman
You don’t need to know much, if any, physics to get absorbed in the unlikely adventures of Richard Feynman, a Nobel Prize-winning physicist who worked on the Manhattan Project and investigated the Challenger explosion. His tales of working on the atomic bomb are more about learning to crack safes and thumbing his nose at the Los Alamos security measures than actual calculations. By the time you read about him playing in a samba band in Rio during Carnival, you’ll be amazed he was actually a real person who had all these adventures.

“Cheaper by the Dozen” by Frank Gilbreth, Jr., and Ernestine Gilbreth Carey
The only thing this book has in common with that Steve Martin movie is a title and a dozen children. That’s a good thing, because the escapades of the real rambunctious Gilbreth family in the 1910s and 1920s will really make you laugh. Think of the logistics of teaching your kids French and German via a record player in the bathroom or painting secret messages in Morse code on the wall to encourage them to decode it. And there’s the time a friend sent a birth control advocate to their house as a prank.

“I’d Tell You I Love You, But Then I’d Have to Kill You” by Ally Carter and “Every Heart a Doorway” by Seanan McGuire
Harry Potter isn’t the only one attending a boarding school or group home where strange things happen. In Ally Carter’s introduction to the six-book Gallagher Girls series, you’ll meet Cammie, who goes to a school for extraordinary young women. You know, the kind learning how to be spies. Seanan McGuire’s star to the five-volume Wayward Children series has more than a touch of fantasy. The Hugo Award-winning novel explores the world of children who have been through the looking glass of magical worlds—then been kicked back when that story’s finished.