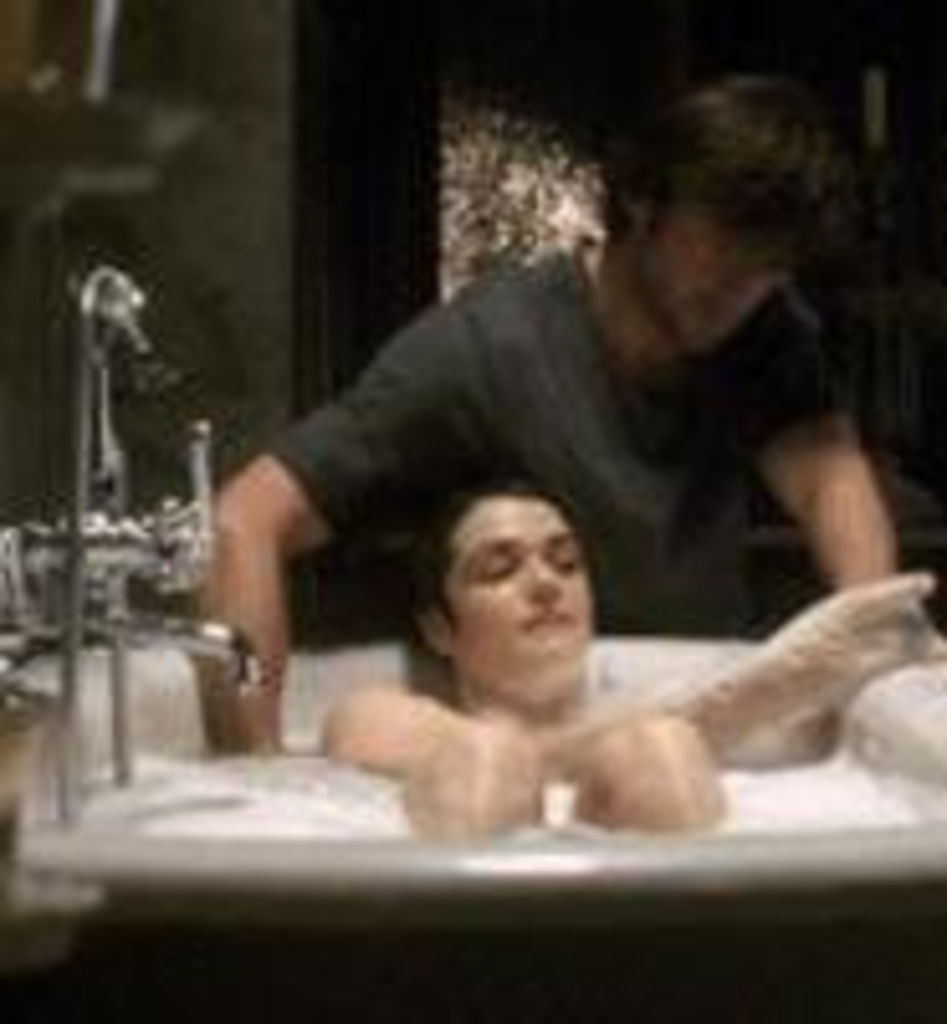 Solemn, flashy and exasperating, The Fountain — adapted by Darren Aronofsky from his own graphic novel — should really be called The Shpritz. The premise is lachrymose, the sets are clammy, and the metaphysics are all wet. The screen is awash in spiraling nebulae and misty points of light, with the soundtrack supplying appropriately moist oohs and aahs.

The Fountain is an exercise in pulp mysticism, overflowing with ponderous enigma, universal patterns and eternal recurrences. It touches all its bases in its first few minutes. An opening invocation of Genesis and a close-up of a golden cross segue to a crib from the sacred text, Raiders of the Lost Ark: A fiery Spanish conquistador (Hugh Jackman) is trapped by a horde of growling natives in a jungle cul-de-sac; he escapes by climbing a sacred pyramid to go mano a mano with their flaming high priest. There’s a cosmic cut — in the film. Jackman, now a bald astronaut, wakes up screaming across the snow-globe universe.

Not nearly as pleasurably tacky as such a description might make it sound, Aronofsky’s historical phantasmagoria jumps among action in three times. There’s the 16th-century derring-do in which Rachel Weisz’s glamorous Queen Isabella sends Jackman’s conquistador to find the Tree of Life and bring back the Sap of Immortality. There’s a present-day melodrama in which Weisz appears as the free-spirited Izze, dying of brain cancer while her renegade medical-researcher spouse, Tom (Jackman), races against time to find a cure. Adding to the mystery, Izze is writing a novel called The Fountain that is actually the conquistador story and which she begs her husband to complete. (The movie’s most impressive special effect is this leather-bound tome written entirely in longhand without a single erasure or correction.) Finally, and least explicably, there’s Tom’s 26th-century astral projection.

These avatars gaze at the Mayan death star, sit beneath the world-tree Yggdrasill and make love in a cozy bathtub. Weisz, the auteur’s own inamorata, is accorded many close-ups. She’s able to carry them, smiling bravely through the tears and claptrap. For his part, Jackman plays Dr. Tom at his most Wolverineish — a grizzled, brooding, ungracious loner given to petulant explosions.

What The Fountain lacks in coherence, it makes up for in ambition. Aronofsky has aspired to make not only the most strenuously far-out movie of the 21st century but also the greatest love story ever told. Part fairy tale, part weepie, part frustrated bodice ripper and part film loop in which beatific Izze invites distracted Tom for a walk (and is grouchily turned down) six times, The Fountain is a movie that prefers celestial whiteouts to prosaic fades and, when it comes to visual emphasis, prizes the overhead zoom above all. It’s as busy as the hotel lobby that seemingly served as the decorating model for Tom’s lab. By the time the hero’s 26th-century self levitates through the deliquescing layers of cosmic onion to the golden birth canal, Izze’s injunction to “finish it” has taken on a new, and not particularly occult, meaning.

Jan 26 @ 7:30 pm City Stage
Jessie feels like a stranger in her own story, and she’s ready to end it. Kansas City Actors Theatre presents Marsha Norman’s Pulitzer Prize-winning drama of a woman driven to her breaking point. A harsh reflection on modern life and its purpose told with sympathy and humor, the psychological exploration of this show will leave a powerful and indelible impression....
Tickets
Martha Redbone–Bone Hill: The Concert

Jan 26 @ 7:30 pm Lied Center
Bone Hill: The Concert is an interdisciplinary musical theatre work created by Martha Redbone and Aaron Whitby that brings to light an important piece of American history that’s never been told. Inspired by the lives of Redbone’s family in the hills of coal-mining Appalachia, their story is shared through songs spanning a swath of American music—from traditional Cherokee chants and...
January 2020 Jan 2020
Subscribe