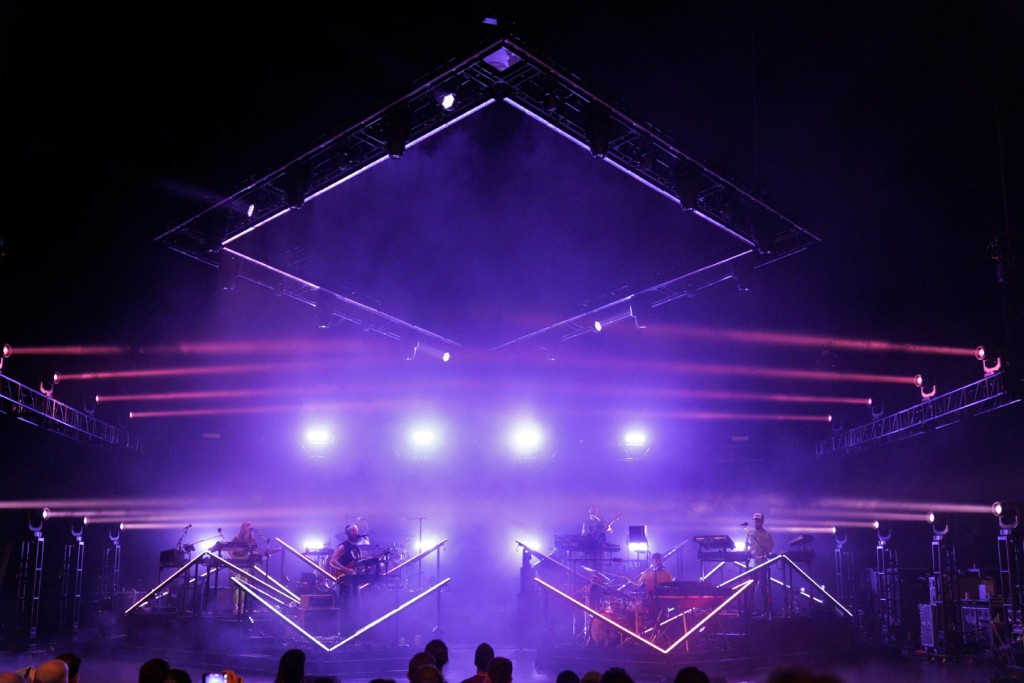 You don’t have to be a great musician to fill amphitheaters, let alone a great person. Justin Vernon seems to be both. Bon Iver, helmed by Vernon, appeared at Starlight on Wednesday night.

As the band filed onstage, each taking places at stations framed by angular LED bars, Justin Vernon gave the crowd this big, friendly wave. You might assume they’d have a certain arrogance, as Bon Iver makes this deeply felt, elaborately layered music and has this highly regarded career over the last 14 years. But this was the wave of your tall goofy friend who spots you from across the room. Vernon’s genuine sweetness appeared again and again throughout the show, alongside musical excellence.

Bon Iver opens with “22 (OVER S∞∞N),” from their 2016 album 22, A Million. A gentle, stuttering, immediately recognizable sample opens this soft and slow song, easing us into this ocean of theirs. Or, more appropriately for this Wisconsin-born band, into this northern lake, the cool waters washing the rest of the world away. 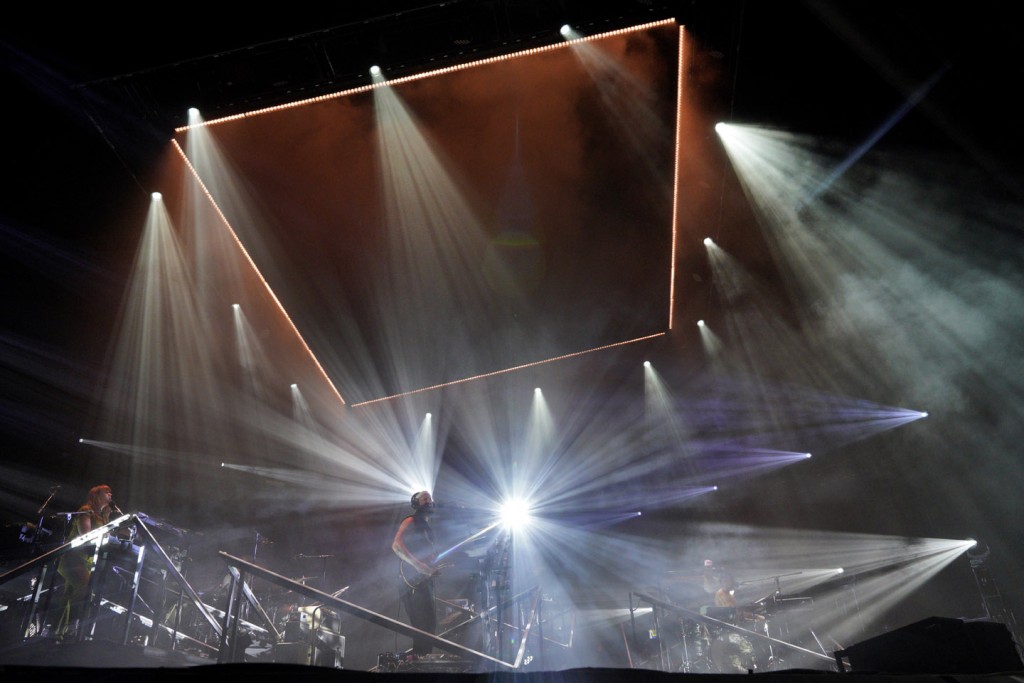 The Starlight stage is framed in the peach clouds of sunset, the crowd bathed in the golden hour light, as Bon Iver launches into “666 ʇ,” with its poppy retro groove. As the song kicks up, with the drums–two full kits–pounding into presence, the stage lights punch out at us. There’s a dissonance between Vernon as this burly man on stage, with his sweatband and his big tattooed arms, and his shimmering falsetto.

“U (Man Like)” opens with proud piano, which, played live, was torqued with some knob, this ethereal piano going sideways. The six musicians on stage are all multi-instrumentalists, showing impressive range. In addition to Vernon, the players are Sean Carey, Jenn Wasner, Mike Lewis, Matt McCaughan and Andy Fitzpatrick. There are two drummers with full kits, many varieties of synths and keyboards, saxophone, guitars, and more.

The live versions of these songs are clearly recognizable from their recorded counterparts, but are not pure recreations. There are unique twists and arrangements that make the live music special; you get to hear it the one way it will ever sound this way. They continue to shape and reshape these musical ideas. 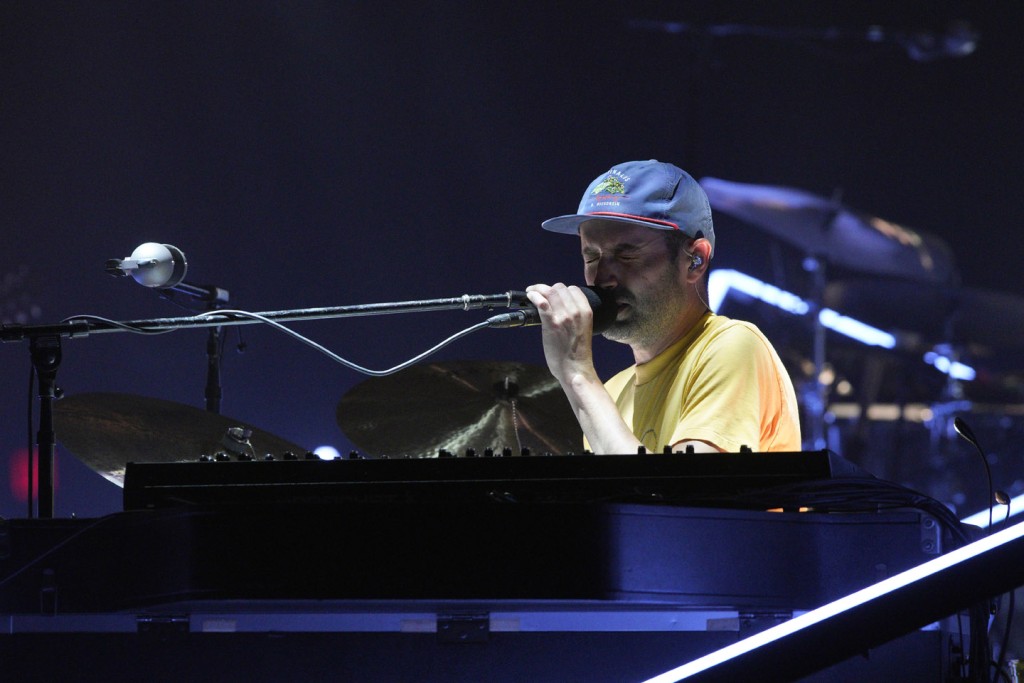 The delicate precision of Bon Iver’s music compels our full attention. Seeing them live for the first time, I realize I don’t actually know many of their lyrics–just the sounds, the swells. Vernon often pushes the vocals through heavy processing. It’s not the kind of concert where the crowd is loudly singing along with every word. Some, yes. But there’s an attentiveness that is more akin to a symphony performance than a rock concert. Instead, your offering as a crowd member is to stand in awe, to offer your attention.

Like this YouTube commenter said, “It’s always mind-blowing how much emotion these guys can harness. Let’s be real, sometimes we have no idea what he’s singing about, but we sure as hell feel it.”

As “Jelmore” pulses and builds, and the sun sets, this feels like the moment they have us, the audience, fully enraptured. I realize I’m holding my breath as they perform this song with its despairing overtones about the climate crisis, and rising lyrics: “How long will you disregard the heat?” 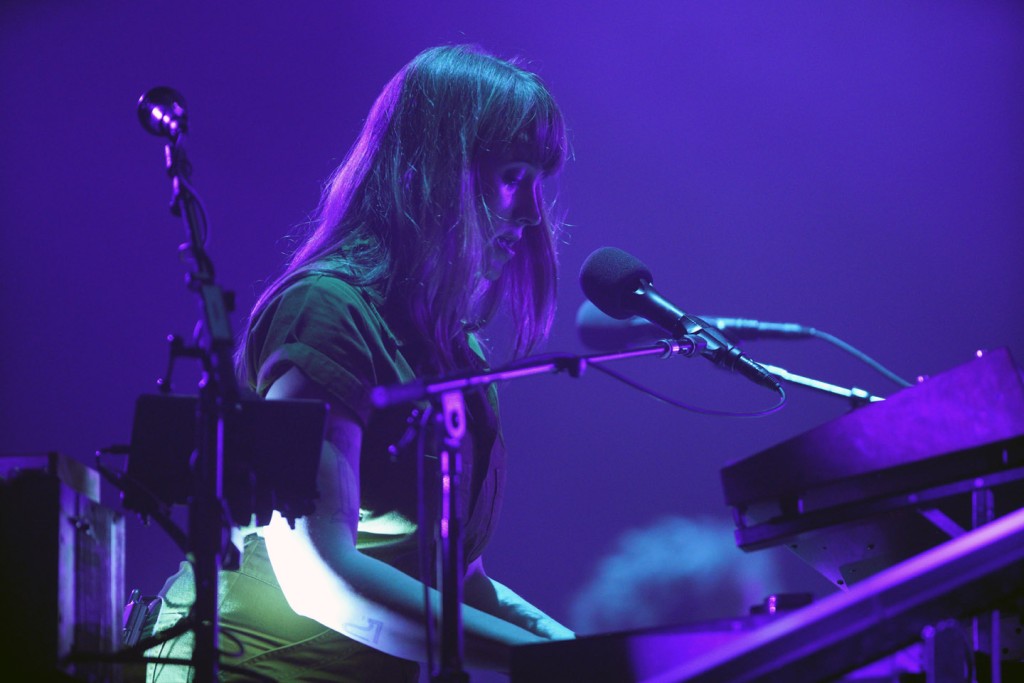 The band builds that on-a-precipice energy as they play “iMi” next, in which we get to hear Vernon’s natural singing voice, a deep baritone that is all the more striking in contrast to his falsetto. As if he’s been walking up on this tightrope and suddenly takes a dive. The song crescendos as more and more sounds are layered on top of the foundational sample–which is a loop of a piece of cardboard being slid across a surface. In the live version, a bright ting-ting on drums replaces the recorded version’s quick plucking of a guitar. The sax comes in, and the whole arrangement swells up to a literally jaw-dropping peak and breakdown to conclude the song.

At one point, Vernon notices someone in the front rows with a sign requesting a song for her birthday: “Sorry dear, that guitar is actually broken,” with a genuinely apologetic tone, as if he really would like to play the song she wants to hear.

Vernon offers thanks to their opener, Bonny Light Horseman, but it’s not rote. He thanks them “for being our inspiration, for being our friends.” He adds a thanks to the crowd “for standing and clapping for them. They played real good today.” His comments paint a picture of a band that’s not just going through the motions but is present and grateful for what they are doing each day. 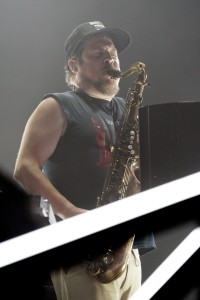 For “Faith” and “Marion,” both off of their latest album, released 2019, i,i, the band guides us through upheaval: angelic vocals breaking into staticky reverb, a gentle heaven snapping to sharp darkness. Marion starts with just acoustic guitar and layered vocals, but by the end had broken it up and down into chaotic light and feedback, Vernon on his knees by his guitar pedalboard, and out of the cacophony, a beat slowly re-emerges. The recorded version just gently fades out much in the same way it came in, but live, we get this glorious chaos that flips the song inside out.

The chaos is a fitting lead-up to “10 d e a t h b R e a s t,” with its heavily distorted vocals and drumbeat, the fevered sounds mirroring the lyrics that sing of “fever rest.” This song feels like an entry to the underworld, one of the many cathartic places that Bon Iver are masters at creating.

This is Bon Iver’s first full tour since January 2020, which was on the tails of i,i’s release. On the stage at Starlight, Vernon says, “We had a lot of time off to wonder if we had it in us to do this anymore.” He expresses such gratitude again and again for the audience throughout the show. “Thank you for making us feel like ourselves up here.” 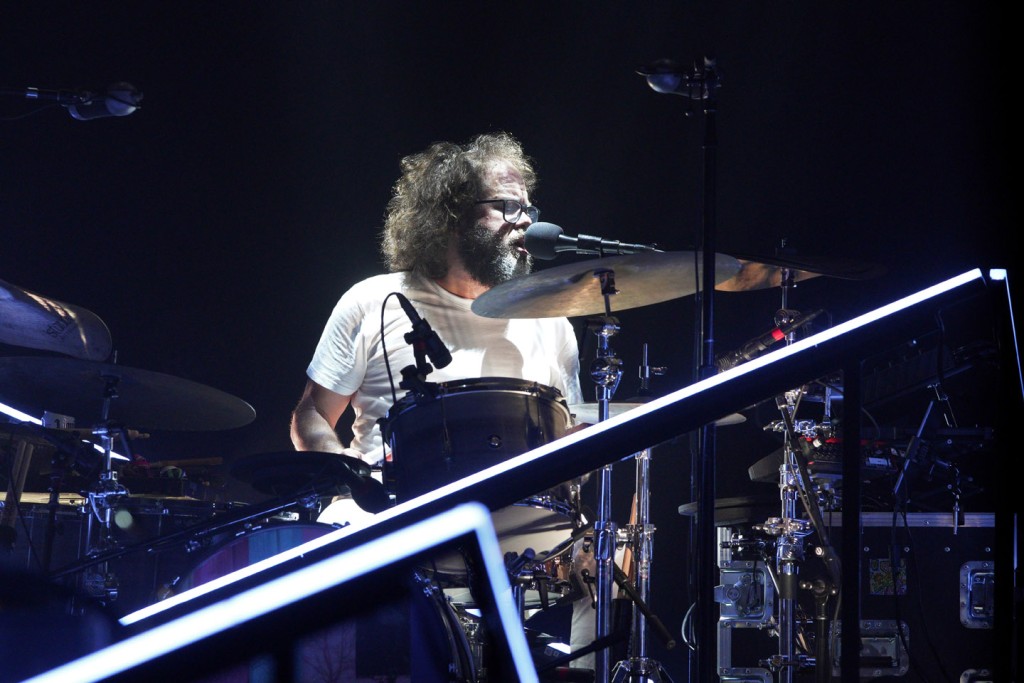 The power of Vernon’s voice–even distorted–is on display in “715 – CR∑∑KS.” Without accompaniment, without lighting added, it is just Vernon, singing his heart out. The way that he can craft a moving song without chorus or even a clear structure–this isn’t something just anyone can do.

On this tour, Vernon’s foundation 22 A Billion partners with local organizations “in an effort to end gender inequity, domestic violence, and sexual abuse.” Their Kansas City partner is MOCSA, the Metropolitan Organization to Counter Sexual Assault, and they had a booth at the show. Vernon gives MOCSA a shout-out from stage, encouraging the audience to connect with and support them.

He says, “We are fucking animals, and we need to sort each other out sometimes.” In this approachable, wholehearted way, he talks about the harm we do to one another. “We don’t see it sometimes. They [MOCSA] see it every day.”

The way he spoke about it, supporting these local orgs isn’t just lip service, or an empty gesture, it’s heartfelt. It has meaning to him, to the band. Something hit me in the chest, to hear about something that can be such a quiet, personal battle spoken plainly about by a man with the platform that he has. I sat down and cried, while he played the next song, just acoustic guitar and his falsetto voice, “Re: Stacks.” He sings, “Your love is safe with me.”

Next came the cooling bath of harmony in “Holocene,” Bon Iver gives emotions a whole landscape to live in, a whole terrain of feeling. Bon Iver is excellent at making music become multidimensional. Even more so, live, when you have the stage set, the lighting design, and can feel the reverberations in your physical body. The layers are so potent that I almost feel like I can taste the music, too.

The music becomes multidimensional poetry: lyrical, audial, visual, all different facets of this same object, the song. It is enrapturing to see how they weave together these various sounds samples notes chords voices to create these aural landscapes. 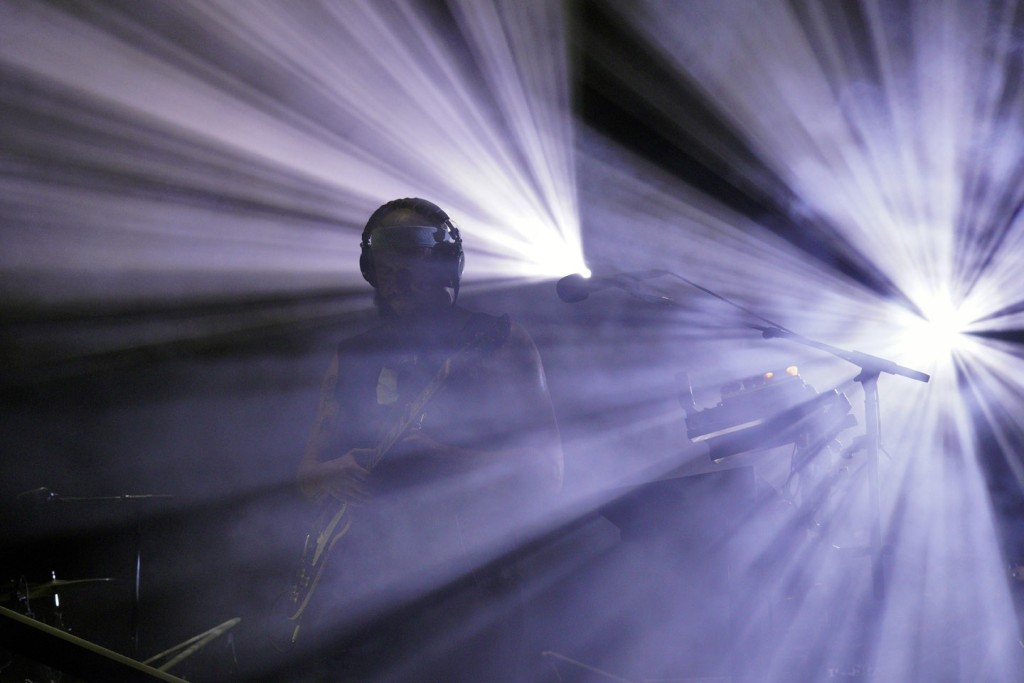 As they play “33 “GOD”,” I wonder if there is anyone else doing things like Bon Iver is doing things right now. (No, there’s not.) The combination of weirdness, experimentation, musical brilliance, with approachability, emotion, and kindness.

Bon Iver’s music isn’t just experimenting with instruments, but also with language. Vernon’s lyrics are poetry, playing with meaning, references, creating neologisms, while also tapping into accessible feelings and experiences: love lost, hopelessness, and despair at the state of the world we live in.

Before they play “Sh’Diah,” Vernon introduces the song by saying, “This one’s called Shittiest Day in American History,” which refers to the day after Trump was elected in 2016. The stage lights up in red and blue as they launch into this meditative song, featuring a writhing sax solo by Mike Lewis, who Vernon has called “our favorite instrumentalist alive today in music.”

Every song feels like an achievement in what music is capable of. Sometimes I can’t believe that people just…made this up. Every musician on stage is giving so much throughout the performance. There is a tangible purposefulness and presence.

For the show’s finale, Vernon gives everything as he screams the final verse of “Naeem,” the anthemic heart of the album i,i. Reverberating over the crowd:“So what is going to happen now? If you don’t look away?”

The band exits the stage as all the lights point upwards like beacons forming a pyramid, like a temple, like a place of ascension. Before they play a two-song encore featuring “Perth” and “RABi,” Vernon’s final call to the audience was, “Y’all spread love now, wherever you go.”