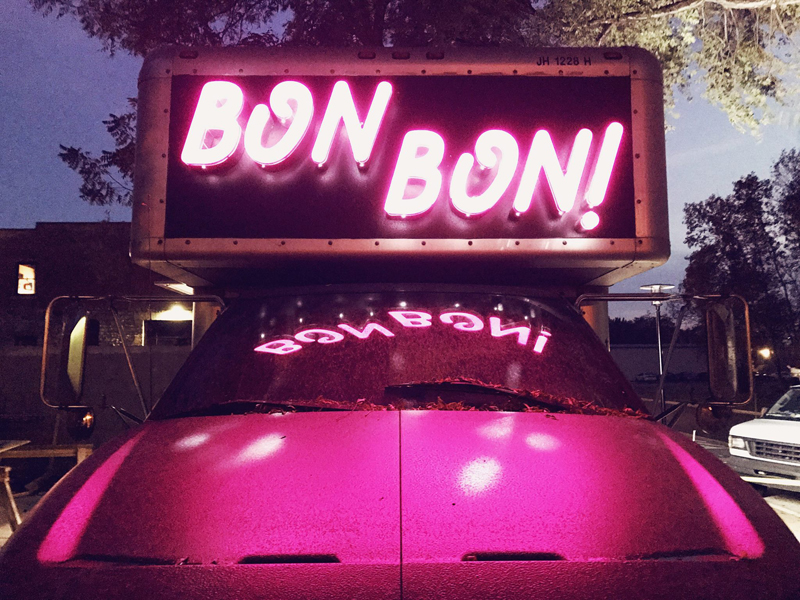 Bon Bon, at 804 Pennsylvania in Lawrence, seems destined to be one of the most unusual restaurants in the area. Owned by Codi and Simon Bates, of Burger Stand, Bon Bon is located in an old limestone building in the rapidly developing area near East Ninth Street, and the menu is, well, eclectic.

The starters include takoyaki (Japanese octopus fritters), sweet-potato-and-poblano samosas, a French chicken rillette, and queso dip. If you’ve ever dreamed of deciding whether to order a hot chicken sandwich, a pork schnitzel plate, tabbouleh or tater-tot goulash, here’s your wake-up call.

Codi Bates explains that much of the menu draws inspiration from the couple’s travels.

“Last fall, Simon was able to take a sabbatical for 40 days and travel solo around the world,” she says. “He went from KC to Tokyo and stopped in over 10 other countries. Throughout his journey, he was welcomed into a few kitchens to cook alongside new friends and ate everything he could get his hands on.”

Bon Bon (the name, Codi Bates says, nods to the couple’s habit of asking each other whether something is good or good good) is also unusual in that its kitchen is outside the building — in a large, customized truck connected to Bon Bon proper. There’s a garden across the street, from which the Bateses say they’ll source some of the restaurant’s ingredients, including vegetables for salads, pickled kimchi and sauerkraut.

“We’ve been able to can, pickle, ferment and preserve our produce from the spring and summer,” Codi Bates says. “We plan on displaying that on our floor-to-ceiling bar shelves inside the building.”

Codi Bates says she expects to open Bon Bon by the end of October.

“Things have been crazy, but great,” explains Leslie Goellner, who owns the restaurant with her husband, the restaurant’s executive chef, Nick Goellner. “My friend equated it to having a baby — as in, you have so many months of preparing and working, and then it actually happens and you don’t feel prepared at all. But our staff and families have just been incredible, and they are the only reason we are able to do the things that we are doing.”

The Antler Room’s menu so far has included a farfalle with rabbit pepperoni and broccoli rabe, a tagliarini with countneck clams and pickled green tomatoes, and a casonsei with braised duck. Other options: a dish of fried Castelvetrano olives; an Icelandic lamb tartare; and octopus with fennel, orange and gremolata aïoli.

The Goellners, you can tell, aren’t aiming for the familiar.

Leslie Goellner says, “My grandfather was a true test for me. I know he has not had food like we are doing before. He told me we awoke his taste buds. I got really excited.”

Also opening its doors this week is the back-in-business T.J.’s Café, the former Grandview location of which which suffered a total-loss fire in July. The new T.J.’s, at 12408 Blue Ridge Boulevard — once the Grandview China Buffet — should seem familiar to the old crowd: classic diner food, from breakfast through dinner, with nary an item breaking the $10 mark.

As The Pitch reported this past June, Crows Coffee owner Zach Moores has purchased Coffee Girls, at 7440 Washington in Waldo. The latter is now closed for remodeling; when it reopens under the Crows Coffee banner, Moores will sell Messenger coffee as well as Robin Krause’s UnBakery cold-pressed juices. And caffeine lovers, take note: This new location will be open until 9 p.m., ensuring that those who need a latte or an Americano past midafternoon have at least one non-Starbucks option south of midtown.

Sullivan’s Steakhouse (4501 West 119th Street) is celebrating its 20th anniversary tonight with $7 hand-shaken martinis and a $7 bar menu. The restaurant also plans giveaways through the night. Advance reservations, via the Sullivan’s website, are recommended but not required.

Loud House Farm (4300 East 113th Street) is hosting a farm dinner in its event space to promote a soon-to-open store in the City Market. Wells Family Farm, debuting in November at 419 Main, will sell grass-fed beef and other local meats and dairy, as well as seafood from the Gulf Coast. The dinner ($45 a person) features cocktails and local beer and wine, as well as a main course of grass-fed prime rib, fresh vegetables and dessert. Tickets at loudhousefarm.com.

From 10 a.m. to 2 p.m. today, the Roasterie (1247 West 27th Street) hosts the Noodle World tour, a food-truck battle featuring competitors from Twisted Asian, KC Pinoy and Bochi Truck. In addition to their regular menus, each truck plans to offer a specialty noodle dish. No tickets are necessary.

Julep (4141 Pennsylvania) is hosting a Bowmore whiskey tasting tonight. For $28, including tax and gratuity, sample a variety of whiskeys, along with a selection of bites from Julep’s kitchen. Tickets are available via Eventbrite.