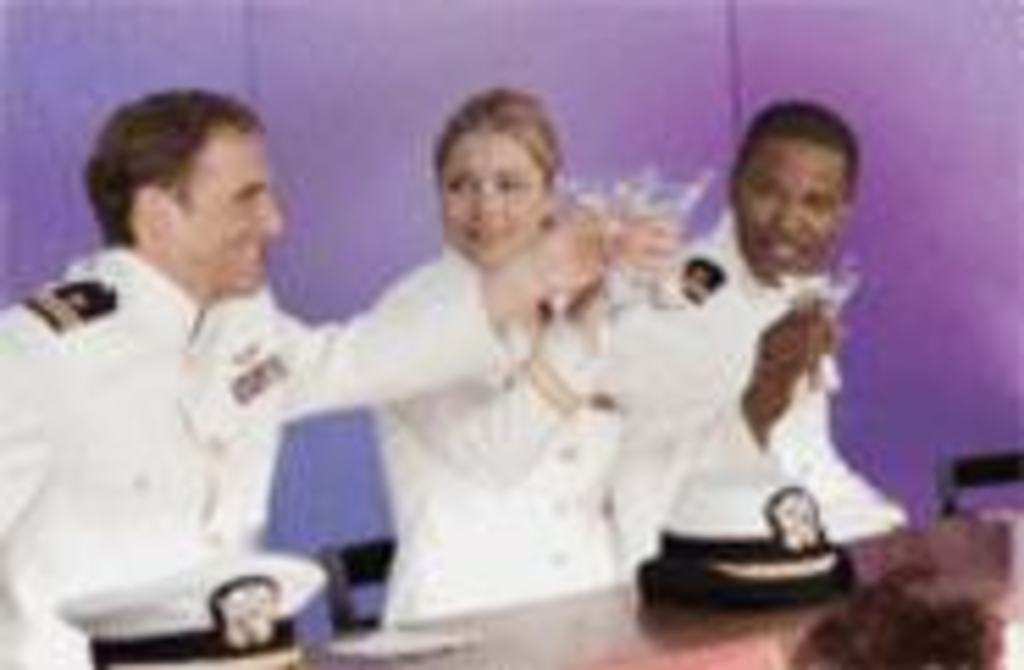 If the Navy is looking for splashy recruiting tools, it could do worse than Stealth, a zillion-dollar action movie stuffed with futuristic jet fighters, glamorous carrier pilots and an overload of digital derring-do. It’s Top Gun revised and updated, complete with a new array of enemies — swarthy Middle Eastern terrorists, nervous post-Soviet Russians and hordes of shifty-eyed North Korean infantrymen with murder in their hearts. Early on, the movie’s U.S. fighter-pilot heroes precision-bomb the roof of a building in Rangoon where three terrorist big shots are holding a secret meeting, and when the entire structure crumbles, we’re inevitably reminded of 9/11 and the World Trade Center. Hollywood is providing a patriotic revenge fantasy at nine bucks a ticket, popcorn not included.

You want high-tech gizmos? You get those, too. Three of this noisy epic’s sleek, missile-loaded stealth aircraft are operated by movie stars wearing chocolate-colored, skin-tight flight suits — the racially diverse, gender-correct trio of Josh Lucas, Jessica Biel and Jamie Foxx. But the fourth plane, nicknamed “EDI” (pronounced Eddie, short for Extreme Deep Invader), is a heavily armed supersonic drone with a mind of its own — the grandson, technologically and philosophically, of HAL, the smarty-pants computer that went berserk in 2001: A Space Odyssey in 1968. A quick learner with no conscience, the spiffy new aircraft flips out after it gets struck by lightning, starts blasting heavy metal in its cockpit, and sets out on a reign of terror the human Navy folks don’t approve of.

In this case, though, the old issue of man versus machine doesn’t entirely satisfy the agenda of director Rob Cohen (XXX, The Fast and the Furious) and screenwriter W.D. Richter (Needful Things, Brubaker). They send their dashing pilots to Thailand for the express purposes of filling a tiny blue bikini with Ms. Biel’s extraordinary fuselage and giving Foxx an opportunity to romance a local beauty who speaks no English but probably saw him in Ray. Meanwhile, Lucas’ Lt. Ben Gannon, all blue-eyed and chiseled and full of noble thoughts, finds himself falling for his wingman, er, wingwoman, Kara Wade (Biel) — she’s one helluva pilot, she’s deeply concerned about avoiding civilian casualties while she’s strafing a shipment of nukes in Tajikistan, and Ben has seen her in that bathing suit.

There’s only one bad guy in this movie’s Navy: a self-absorbed captain played by Sam Shepard, who has rushed EDI into combat for his own purposes. Everybody else is dedicated to the cause of freedom but not above drinking $12 martinis and making out at the bar between air strikes against rogue nations. In fact, one of the great things about the crisis-a-minute pace of this elaborate fantasy is that its team of airborne warriors seems to be everywhere at once — catapulted off the flight deck of the U.S.S. Abraham Lincoln somewhere in the Pacific one minute, heading off EDI’s unauthorized attack on a cold-fusion plant in Siberia the next. The Korean peninsula. Myanmar. The starkly mountainous republics of the former Soviet Union. A secret base in the wilds of Alaska. They’re all in a day’s work — apparently an hour’s work — for our worthies.

I’m still trying to figure out how Lt. Ben gets from Alaska to North Korea in what appears to be three minutes and, once there, how he manages to find his downed lady love, then escape Kim Jong Il’s none-too-hospitable nation, despite the destruction of both of their airplanes and the fact that they’re surrounded by the entire North Korean army. Not even Tom Cruise, aka Maverick, on his best day could pull off such miracles. Oh, well. Let’s just credit good old American ingenuity — or Hollywood’s irrepressible desire to fill our heads with fantastic nonsense — and move on.