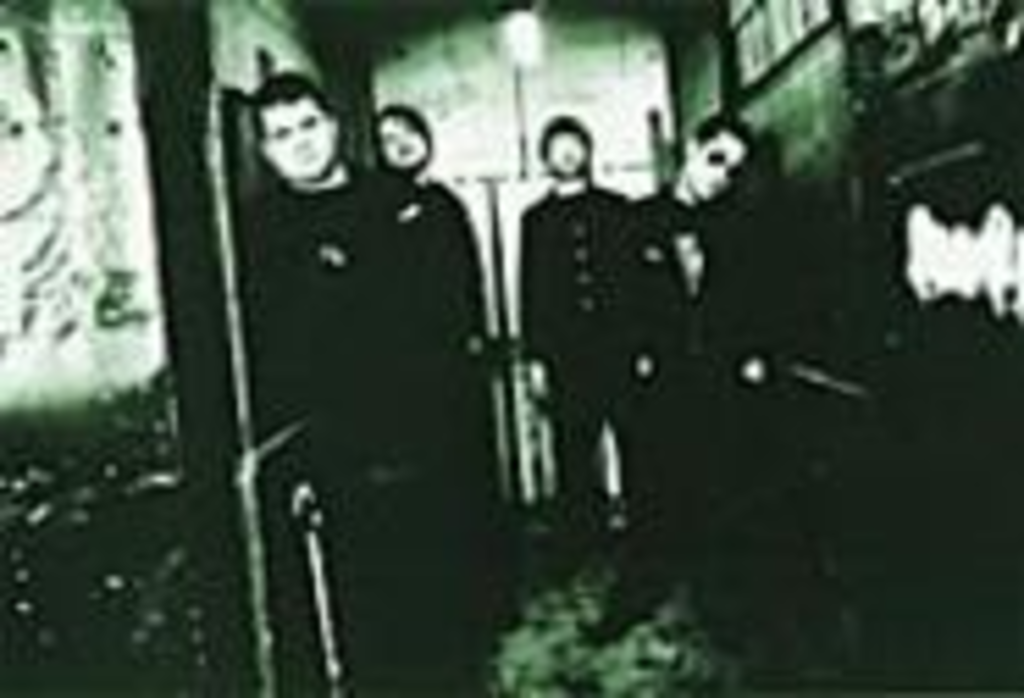 So many songs about hearts done wrong/About love’s lost bitterness/Jilted Joes wrote your sing-alongs/Well I dare you to hum to this.

Spat ferociously over swift rhythms and scorching guitar licks, these opening lines from the first song on New Bomb Turks‘ latest record, Nightmare Scenario, concisely describe the band’s “doing-it-our-way” attitude. This stubborn independence allowed the Turks to create a sound, as evidenced on countless singles released at a pace to rival the group’s hyperactive drum beats, that turned many heads in the indie/punk/hardcore scene. Eventually, their rough but compelling releases won them a contract in 1992 with German-based Crypt Records, where they continued to record at a prolific clip. Their 1993 debut, Destroy-Oh-Boy, won critical raves from such mainstream publications as Spin and Alternative Press, while punk bible Maximum Rock and Roll named it one of the best rock and roll albums of all time. Soon after, the Turks caught the attention of Brett Gurewitz, owner of punk’s biggest indie, Epitaph. Not bad for a group started on a lark by four future Ohio State graduates who shared a love for Stooges-style punk and obscure garage-rock acts.

Speaking from his home in Columbus, Ohio, two weeks after completing a six-week European tour (one of several the group has done, due in equal parts to its prior affiliation with Crypt and to European music fans’ love of all things garage rock), lead singer Eric Davidson explains that the band’s name comes from a similarly rebellious character in the1980 film The Hollywood Knights. “It’s a really bad movie, but the character, Newbomb Turk (Robert Wuhl) is pretty hilarious,” Davidson says. “When Jim (Weber, guitarist) and I were coming up with names for the group, that was the first one we didn’t retch at. When you come up with a name, you never guess you’ll be around for 10 years.”

It’s fitting that the group was named after a character from a campy comedy; the Turks are known for injecting humor into their manic performances. Davidson in particular is worth focusing on, for his Iggy Pop-esque mic brandishing creativity as well as his Jim Carrey-like arsenal of goofy facial expressions. The band’s ability to laugh might be a key to its longevity, as is selective tour scheduling.

“We’ve always tried to space it out because we’ve known a lot of bands that toured too much for one or two years, and they all got burned out,” Davidson says. Former drummer Bill Randt fell victim to this scenario in 1999. When the rest of the group felt stifled by Randt’s palpable disinterest after the Turks returned from their first Australian tour, they replaced him with Sam Brown, formerly of the Columbus-based band Gaunt.

Despite this minor lineup change, the Turks’ core remains intact, and Davidson says this can be attributed to the fact that the band’s members were friends before they started playing together. “We were able to avoid rock and roll horror stories,” he says. “Nobody in the band became a big junkie, and nobody slept with one of the other guys’ girlfriends. We know everybody’s piques and quirks and when not to piss anybody off. At this point it would take deciding not to do it anymore to break up.”

Lesser bands might have broken up in the face of the sneering the Turks encountered when they signed to Epitaph, becoming labelmates with such heavyweights as Rancid, NOFX, and, at the time, The Offspring. Some screamed “hypocrites,” citing interviews during which the Turks had made disparaging remarks about various groups on the label. Then, when some of these critics heard the group’s Epitaph debut, which featured horns and piano for the first time, they immediately jumped to the conclusion that the members were caving in to label pressure to change their sound. In fact, Scared Straight was initially a demo made when the group was shopping for a label. After their contract with Crypt expired, the Turks recorded the album at a friend’s studio in Cleveland and planned to release it on their own if no labels were interested.

“Gurewitz had been calling Jim on and off for a couple of years to see if we were interested in his label,” Davidson says. “We sent him the finished recording and fully expected them to say, ‘This is all right, but we’ll give you more money if you’d like to re-record it.'” But the Epitaph staff, wisely deciding not to dilute the band’s raw power, released it as is, and Davidson says the label remained hands-off as the Turks delivered an equally edgy follow-up, 1998’s At Rope’s End, and their most recent effort, which cuts back on the thrash in favor of a heaping dose of ’60s trash-rock. The music might be a notch slower, but the lyrics are as sharp as ever, particularly Davidson’s rants against automated teller machines and several indie bands (none of which are signed to Epitaph).

Davidson says “End of the Great Credibility Race” is about the hard-hitting realization younger bands must accept when they discover that people aren’t always in the music business just because they love music. When such big mergers as Seagrams/ Universal happened, so many bands were dropped that all those credibility issues about what is “real” and what is “alternative” became stupid questions. “We had good friends working the hip labels, such as Matador and Dischord, who really liked their jobs and loved music, but nine and a half times out of 10, that’s not the case overall,” explains Davidson. “I would meet these kids working at these small labels who were obviously trust-fund kids doing it because they thought it was cool. They’d always quit their job at the end of the summer and go work for their dads or whatever.”

Especially considering such disloyalty from many on the other side of the music business, the Turks know that pleasing their fans is a vital concern, but it’s one that must be subordinate to enjoying the music they play. Davidson admits that when a band has been around for as long as his has, it’s natural to worry about old fans’ scoffing at the group for trying new things. “But then we stop ourselves immediately,” he declares. “If the songs are fun to us and we like to play them, then hopefully the old fans will go along with it.” He adds that though the band may change over time to keep things fresh, the four will never succumb to such tacky traps as remixing their songs over dance beats or having a 30-piece orchestra behind them.

Five years after some labeled the Turks sellouts, most of the bands who ridiculed them either have been dropped, are not friends anymore, or pissed their money away on big producers, while Davidson’s group finds itself in a scenario that’s far from a nightmare. “Here we are, still friends, and I think we’re still putting out good records,” Davidson says. “Ultimately, it all comes down to that.”