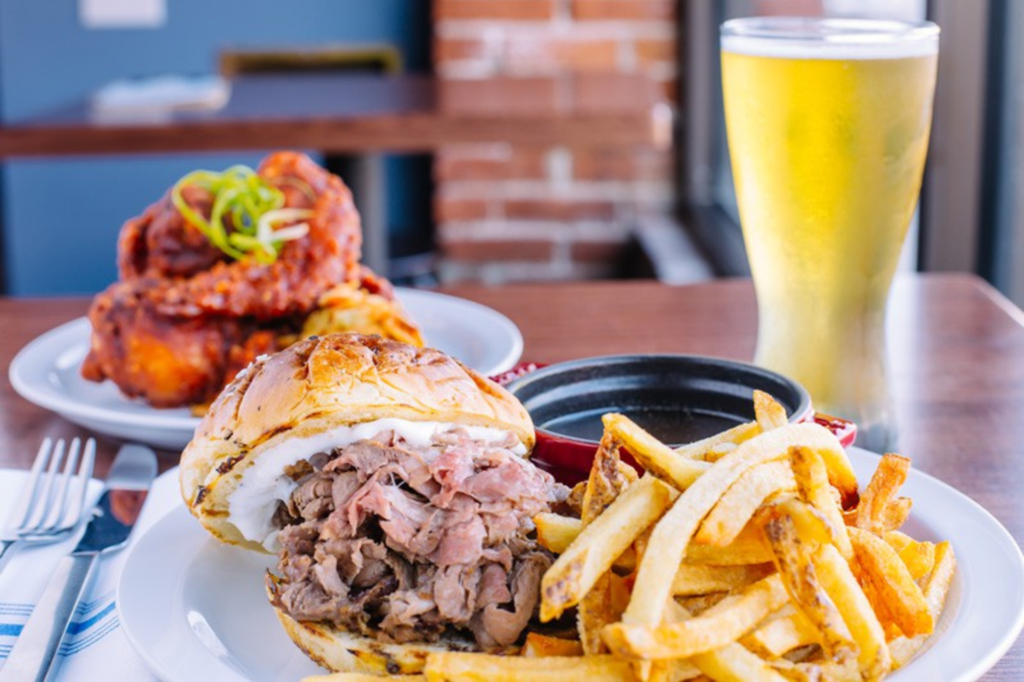 It’s been a long time since I’ve worn a bib, but I think I’ve found the Kansas City restaurant where I wouldn’t be embarrassed to put one on.

At Blvd Tavern, every order of chef Derek Nacey’s twice-fried chicken wings comes with two folded damp towels — but demands at least three times as many. I walked out of the three-month-old restaurant wearing more hot sauce than I’d tasted. But I’d tasted enough to know that I was going to need more soon. These wings are addictive enough that you set aside certain gentlemanly niceties in favor of getting down to sloppy business.

Nacey is from upstate New York, the region that gave America the Buffalo wing as we know it. But his fat, meaty version — he calls the dish “KFC wings” — is a world away from the Empire State. The K is for Korean, and the flavor is a knockout. Nacey brines the wings in salt, pepper, lemon juice and honey before dipping them in a batter of flour, baking powder, beer and vodka. The chicken pieces are then quick-fried and set aside, then fried again and slathered with a fiery, slightly vinegary hot sauce. The wings come with a mound of crunchy, house-made kimchee, an ideal complement.

Korean chicken wings are, as Nacey rightly points out, “a thing” — a beloved dish in bigger cities. Around here, they’re on the scarce side. But the demand is there. On the March evening when the chef and his wife, Meghan Nacey, opened Blvd, their first restaurant, it took just an hour to sell out of the wings.

Even in Kansas City, no restaurant flies on chicken wings alone, but Blvd could almost get away with it. Still, the Naceys offer a small but smart menu of familiar pub favorites. There are just nine entrées on offer right now, but each is beautifully and expertly prepared. It’s almost too modest for the Naceys to call their place a tavern.

It is a tavern, though, with a cocktail menu about twice as long as the list of things to eat and with a bar that dominates the long dining room. Almost every seat in the house faces that metal-topped counter, the sole relic of the previous tenant (Nica’s 320, which became Nica’s Lagniappe Cajun Kitchen).

Nearly everything on the menu complements the wines, beers and mixed drinks in one way or another. It’s easy to find a beverage to put with the fried starters or other small plates, such as steamed mussels or grilled asparagus. As for those terrific, slippery wings, I found that a steady flow of ice water helped, even if my grip on the glass wasn’t always sure.

Once you’ve cleaned yourself up a bit, you’ll have some choices to make about the main course. I went first for the fish and chips and was rewarded by succulent, flaky hunks of cod that had been doused in a light beer batter and fried just right. They arrived with crispy, hand-cut fries and a mercifully small dish of that British staple, bland mushy peas. On another visit, I sampled the seared flat iron steak, a flavorful cut of beef if not the most tender, but it’s winningly moist here. Nacey lends it an added richness with a melting dollop of shallot-herb butter.

Only one entrée at Blvd vaults past the $25 mark, but it’s worth it. I’m willing to pay a premium for lamb chops that are this fork-tender, with just this suggestion of slight grassiness. It comes with a jumble of rice that’s seasoned with preserved lemon and saffron, and I’d order it all summer should Nacey decide to listen to his regulars and keep it through the season.

No meat gets more abuse from restaurant kitchens than the lowly grilled chicken breast, which is generally there only as a reluctantly made alternative for those too cheap to go for lamb or Duroc pork chops. So I wavered before ordering Nacey’s brick chicken, having suffered through a lot of burnt, botched or just plain bad birds over the years. But Blvd’s dish, brined and rubbed with garlic and herbs before grilling, retains a supple juiciness under an exterior that’s slightly crisp and engagingly seasoned.

The daytime menu has a good burger and a fine plate of shrimp and grits, but its standout is another culinary homage, this one legitimately New York-directed: beef on weck. The sandwich of thin-sliced roast beef is to western New York what a brisket sandwich is to a Kansas Citian, and Nacey does his birthplace proud. He uses a soft Farm to Market salt roll, tarting it up by brushing the surface with caraway seeds to give a fairly reasonable facsimile of a kummelweck bun. The dressing is a creamy, fresh-tasting horseradish sauce; the meat is on the money; and the side cup of steaming au jus is heavenly.

It’s a rich sandwich and well worth a little restraint, the better to end up with a bit to take home — and to leave room for Blvd’s superbly flaky apple croustade (with salted-caramel ice cream). I don’t know what part of the country invented this delicacy, but it seems to work well with every dish on Nacey’s menu, including the Korean wings.

Hand me my bib.