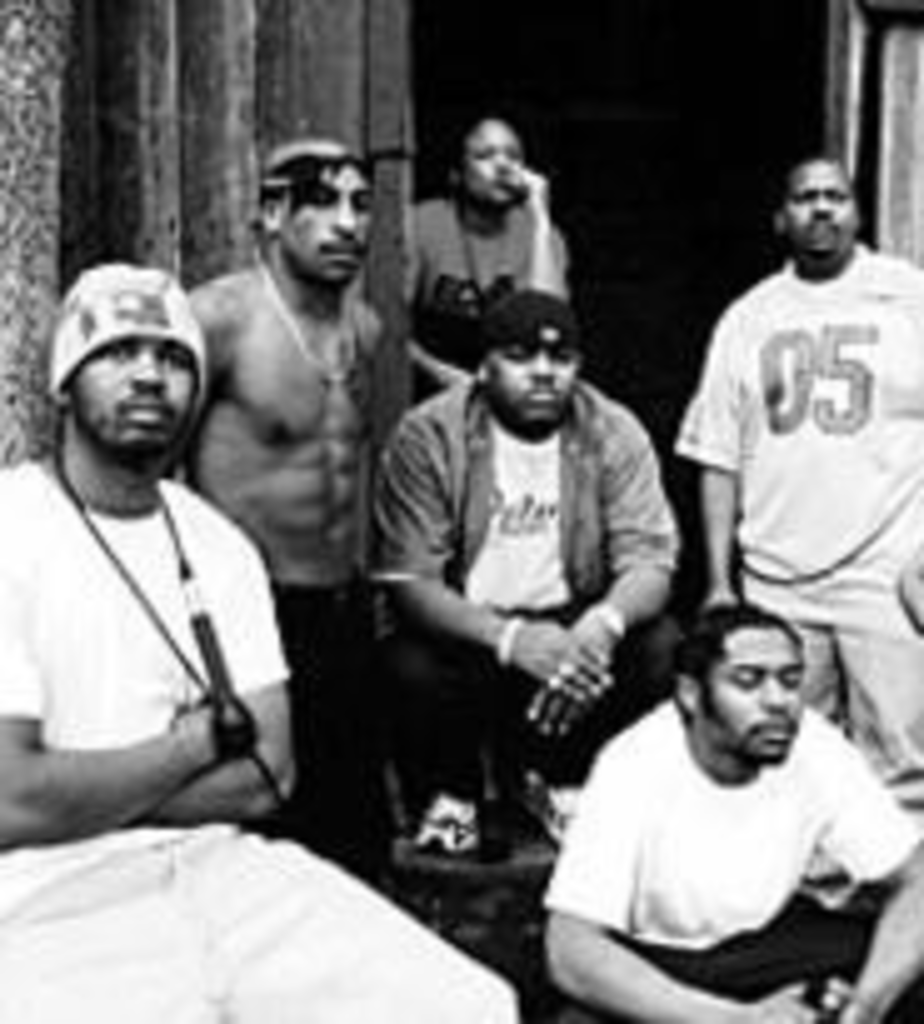 The six members of the Lawrence-based hip-hop group The Bomb Squad (not to be confused with the production team of the same name that cranked out hits for Public Enemy and Ice Cube back in the day) are hanging out at the annual Reggae Festival at Penn Valley Park. Although the rappers — especially Alrick “Ten-10” Johnson, who hails from Kingston, Jamaica — are excited about the sights and sounds surrounding them, there’s work to be done. The crew’s main objective is to promote its upcoming performance as the opening act for Ghostface Killah and Raekwon at The Granada in Lawrence, and its members stroll the park grounds, operating as an in-house street team as they pass out fliers to the crowd.

The group understands and respects the importance of opening for two of hip-hop’s top lyricists, and its members display controlled excitement when talking about the show. However, their manager and coproducer, Keith Loneker, a former KU football star and NFL player, is a bit more cocky. “The industry is still asleep, but we are about to wake them up,” he promises.

Loneker, who had a substantial part in Steven Soderbergh’s crime caper Out of Sight, says he understands the music industry because it’s similar to the movie industry. He signed The Bomb Squad to his independent label, Lock-N-Load Records, and his primary goal is to get the group some major-league exposure.

“[Reggae Festival organizers] should have asked us to play,” he says, referring to the inclusion of such hip-hop artists as Ludakris and Tech N9ne at this year’s festival. “A lot of people still don’t know who we are, but that’s about to change.”

The Bomb Squad unites six rappers who had either experienced fallouts with other groups or become disenchanted with stalled solo careers. “Everybody’s got a different style, but that’s what makes us so gravy,” says Anthony “Clacc” Vital. The group’s debut disc, Timez Up!, delves into East Coast boogie, Dirty South bounce, West Coast g-funk and Midwest swing. “We represent a combination of styles ’cause we from all over, but it’s all based around Midwest livin’,” explains Richard “GQ the Country Bunkin'” Thomas.

Another reason for the disc’s diversity is the even division of MC duties. “With so many people in the group, it does cut down on mic time, but you gotta share,” says Clacc. “We understand each other’s strengths and weaknesses, so we know who’s good for this verse and that verse. The bottom line is who is going to make the song sound the best.”

The group spent three months recording the CD, which is loaded with battle-cat rhymes and hardcore poetic lyrics. “Every time we went into the studio we put on our paint,” says Paul “Big Chill 60956” Franklin-Bey. “We went into the studio every day for hours.” Before booking studio time, members of the Squad honed their skills at house parties and freestyle sessions around town.

Loneker claims Timez Up! represents the culmination of the members’ growth as MCs. “The album ain’t nothin’ but a big party without the guns,” describes Tyrone “Skitzo” Spates. “People are tired of all that ‘murda, murda, kill, kill’ stuff. I’m a gangsta and I’m tired of hearing it. Hip-hop is culture and it should be respected. That’s what we do.”

In addition to respecting their genre, the members of The Bomb Squad display a high level of respect for one another. “We all understand the common goal,” Skitzo says. “Yeah, we argue sometimes, but we are businessmen and we solve our problems like men. Ain’t none of us kids.”

As Skitzo implies, there has been some turmoil. The Bomb Squad originally featured seven members, but Dove Dawg left the group because of creative differences. Loneker says Dove Dawg, who appears on several of the album’s tracks as well as on the CD’s cover, was more interested in pursuing a solo career than being a team player.

But really, the fact that this team even came together is rather unusual. All six members relocated to Lawrence’s east side for various reasons. GQ moved from Los Angeles in 1988. “I was like the Fresh Prince of Bel Air,” he says. “My mom sent me out to Kansas to live with my uncle because I was a troubled child.”

Clacc moved from Lake Charles, Louisiana, in 1996 to live with his sister, who attended KU. “I needed to get away,” he explains. “It was nothing there but trouble.” James “Cassanova” Hawkins moved from Los Angeles with his family. Skitzo relocated from Caruthersville, Missouri. Ten-10 arrived in 1995 from Brooklyn, and Big Chill, originally from Alton, Illinois, came to Lawrence from Chicago to raise his child.

Before arriving in the Land of Oz, each member had preconceived ideas about living in Kansas. The common perceptions: No black people lived in Kansas, and it was country as hell and very slow. “I didn’t want to come at first, but I’m glad I came because Kansas is such a peaceful place,” says Cassanova. “It’s a good place to live.”

Like Cassanova, all The Bomb Squad’s members have fallen in love with the small college town with the thriving music scene that openly includes rap as part of the haps. “We want to do more shows in Kansas City, but there are no venues that support rap,” GQ says. “So a lot of people from KC drive up to Lawrence to check us out.”

The group began developing its following with sets at Tremors’ now-legendary Thursday hip-hop night. Fans rush the stage at every performance, excited by the Squad’s manic rock-and-roll-style energy. “We make music people can feel,” Skitzo says. “I like to see the crowd going crazy. It hypes me up.”

Hyping the industry is now the group’s biggest challenge. Eight-times-platinum-selling St. Louis native Nelly has caused a lot of industry folk to notice the talent in the Midwest, and Coo-Coo Cal (Milwaukee) and Hi-Tek (Cincinnati) have placed other previously ignored cities on the hip-hop map. “I love Nelly,” Clacc says. “I’m glad he opened the door for us, but we still gotta work hard to be able to walk through the door.”

“There really is no pressure on us because we ain’t supposed to win,” GQ says. “The last thing the industry is expecting is for a rap group to come from Lawrence, Kansas, and represent, and that’s what we are about to do.”