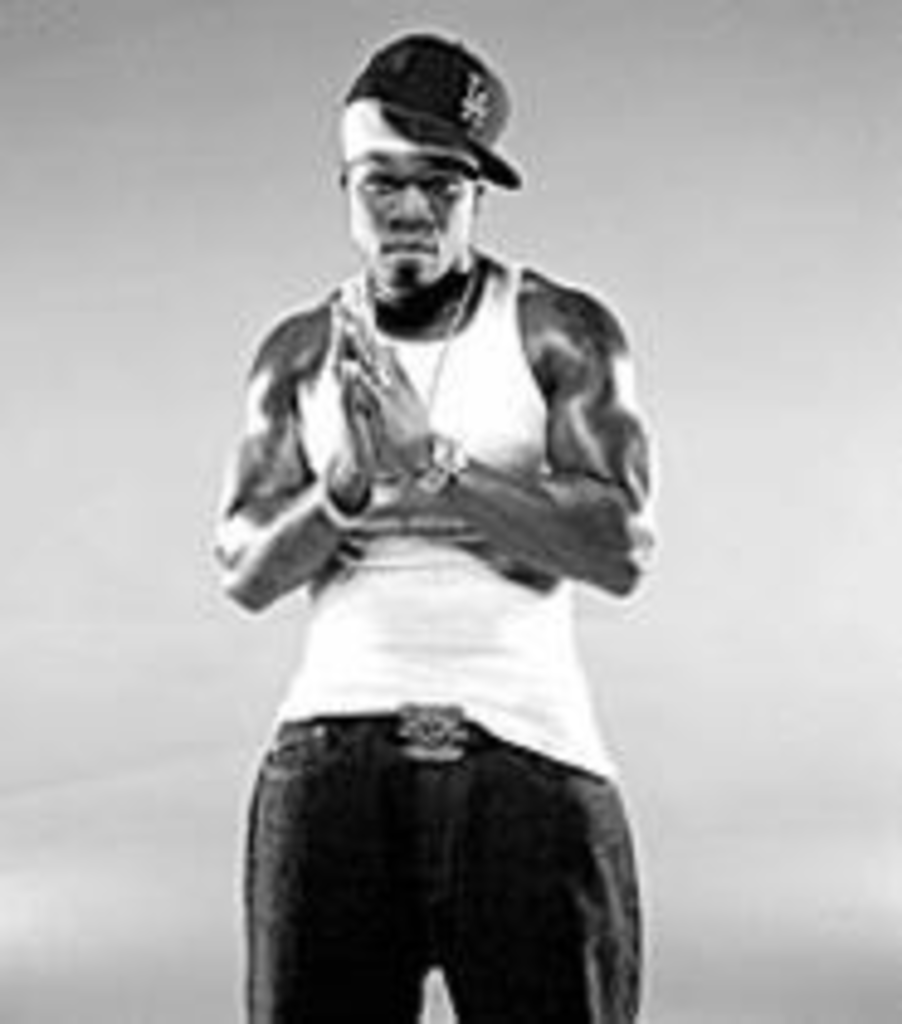 Everyone has known for some time that 50 Cent is a brilliant self-promoter, an up-from-nothing gangsta icon with coattails longer than the stretch limos that now carry him about. And, of course, even your grandma can recite the number of times he was shot (nine). What hasn’t been clear until now is whether 50 is also an artist to be reckoned with, not merely a hip-hop hustler who reportedly made more than $50 million last year. The question was lost amid the megaplatinum success of his 2003 breakthrough debut, Get Rich or Die Tryin,’ launched as it was with the full weight of Dr. Dre and Eminem’s participation and clout.

But with his second album, The Massacre, we finally start getting some answers regarding 50’s artistic cred (or lack thereof). In the time-honored tradition of sequels, the disc is one long business decision set to wax, a solid, workmanlike affair that’s a virtual carbon copy of its predecessor, awash in gunplay and gratuitous nastiness. The reason for 50’s conservative choice to avoid straying from the Get Rich blueprint is obvious when one hears his few failed attempts at growth: He repeats himself because he has nothing else to say.

No matter how much credit you extend him for the attempts at varying his flow and subject matter, a simple truth cannot be escaped: 50 is, at best, an average MC. More disappointing, he — like so many of his peers — offers his rhymes to the world with almost no back story, unless you count the generic references to drug dealing or the odd biographical detail (My ma would turn in her grave if I ever married a white chick). Remove the occasional G-Unit or Aftermath name-checks and 95 percent of these rhymes could go into almost any MC’s notebook. This impersonal approach ensures that 50 never transcends the cartoon-Rambo image he portrays on the disc’s cover.

“I’m Supposed to Die Tonight,” for example, taps into a classic theme — the hunted hunter — and promises some searching paranoia in the vein of the Ghetto Boys’ classic “Mind Playin’ Tricks on Me” or the Notorious B.I.G.’s eerily prescient epitaph, Life After Death. In 50’s hands, however, there’s no danger — except to his adversary’s girlfriend — once 50 discovers where she get her hair and nails done. Another gust of G-Unit bluster blows by harmlessly, like an Uzi spitting blanks.

It’s not that 50 can’t be effective on the mike; his underrated singing pulls tunes such as the petulant “God Gave Me Style” above sea level, and the oft-quoted disses of “Piggy Bank” do find some deserving targets (even though 50 was far more effective years ago, when he tried the same trick on “How to Rob,” a tune even funnier because of his audacity as a then-unknown). His calm voice in the midst of the violent excess he describes is strangely reassuring, to the point that small variations, such as the threateningly drawled choruses of “This Is 50,” start to seem like a bigger deal than they are.

Unfortunately, the same can’t be said of 50’s few flashes of ambition. Much will be made of “A Baltimore Love Thing,” the track upon which the star himself has pinned his hopes for artistic redemption. But let’s face facts: Personifying heroin in song is an idea much older than 50, and it isn’t like this version breaks any ground Lou Reed didn’t shatter almost 40 years ago with lines such as When we first met/I thought you’d never doubt me/Now you tryin’ to leave me/You’ll never live without me. That such a trifle is offered as a sign of maturity is proof that there isn’t much happening here.

Of course, apologists for Dre and Eminem’s lyrically challenged stable of MCs rely on a now-standard defense: “Yeah, but check out the beats.” It’s a fail-safe response, especially when you know there’ll be some Dr. Dre productions that normally justify it. In this case, though, Dre’s work doesn’t meet expectations. There are only a couple of songs from him on the album. “Outta Control,” in shuffling march time with a swirling organ hook, is a clear standout, but there aren’t many of those on The Massacre.

Instead, the disc is a proficient collection — and a surprisingly coherent one, given its dozen-odd producers (including Hi-Tek, Scott Storch and Buckwild). The weakest spots come during Eminem’s contributions, which are uncharacteristically lame. Almost all of them rely on the ominous, chromatic riffs he’s been recycling for some time now, which are starting to fossilize. (His “Gatman and Robbin'” is the album’s slightest track, an annoying throwaway that painfully overstretches its punch line and TV-theme hook.)

There also are a couple of showcases for Aftermath up-and-comer Olivia, who demonstrates on “Candy Shop” that she can work herself into the requisite lather on the mike. But this may be the first Aftermath release without at least a couple of must-hear beats, an omission that might prove critical in the attempt to extend 50’s reign into the long, hot (and new-release-packed) summer.

What this album portends for the wider reign of Aftermath is equally troubling. Dre and Eminem have assembled a stable of MCs devoid of strong personalities or outstanding mike skills (coincidence or not, Aftermath’s one great in-house rapper, the legendary Rakim, fled before finishing an album), and 50 confirms with this outing that he’s no exception. Dre and company can’t perpetuate their success indefinitely. All empires are built on sand — hip-hop empires most notably. The Massacre holds down the fort, but beneath its solid foundation, the ground is already shifting.