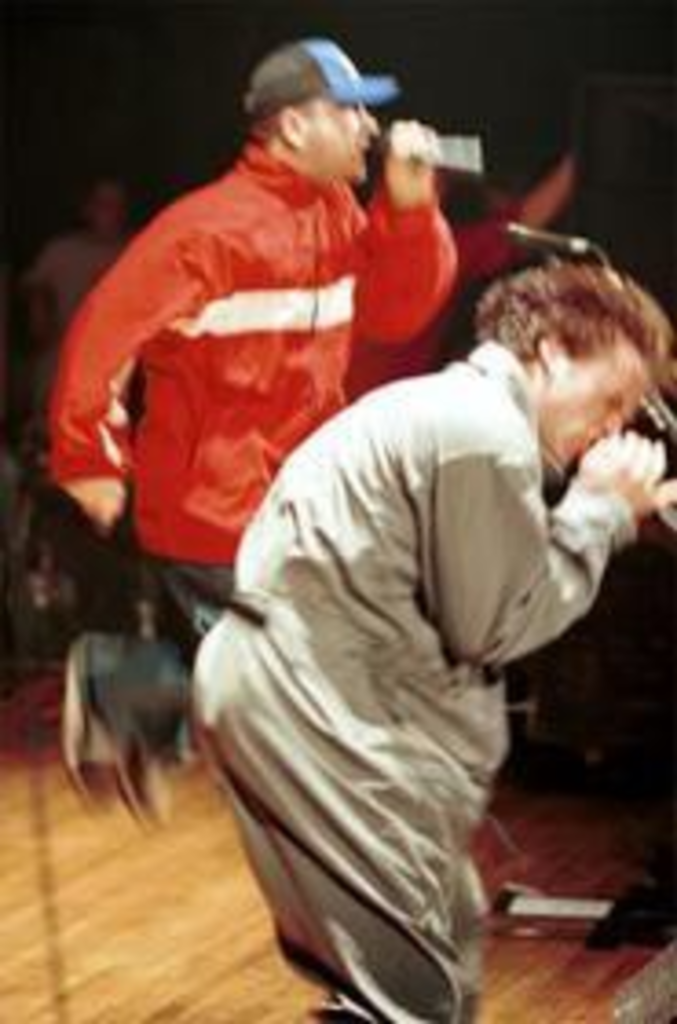 Circus entrepreneur P.T. Barnum once said, “There’s a sucker born every minute.” Infamous pop-art icon Andy Warhol once said, “In the future, everyone will be famous for 15 minutes.” Most recently, Jimmy Pop, lead lunatic for the Philadelphia-based Bloodhound Gang said, “A lap dance is better when the stripper is crying.” That despicable quote is actually the title of a song from the band’s latest album, Hooray For Boobies, which has taken the TRL generation by storm. The carny-like crew was in Lawrence Wednesday night to promote this dubious disc and “The Bad Touch,” the infectious hit single it spawned.

You know this song, even if you don’t know its name — it’s the new-wave tune that implores all mammals to do it like they do on the Discovery Channel. By way of example, the Bloodhound Gang did its best impression of wild animals, and its crowd proved to be quick studies, flashing naughty bits of flesh willy-nilly and matching the group’s considerable nasty streak. At times, the scene resembled a Roman bacchanalia, full of liquored-up satyrs dancing in berserk fashion, without any regard for self-preservation or societal norms.

Conceding to the Lord of the Flies-style mob mentality, the crowd reveled in the hedonism, offering up whoever might be moshing next to them up to the sacrificial altar that was the stage for further abuse and humiliation. The band managed to convince one portly fellow to chug warm Dr Pepper until he puked — right on lead singer Jimmy Pop — for $25 and a T-shirt. Various ladies and gentlemen were persuaded to drop drawers and more, to the delight of both the underaged gawkers close to the stage and the testosterone-overloaded rubes in the cheap seats. If director John Landis could put the entire cast of his seminal film Animal House on tour with Otis Day and the Nights, he might be able to approximate this group’s strange, creepy, and crazy stage antics.

Equal parts Depeche Mode-style synth-pop, Dead Milkmen-esque nerdy punk rock, and 2 Live Crew-worshipping perversity, the Bloodhound Gang delivered a scatological tribute to all things best left in the gutter, and its rabid, ever-growing cult loves its members just the way they are. The childish quintet found several new and inventive ways to dissect and defecate on popular culture, including replacing the choruses to its songs with the familiar strains of songs by Michael Jackson, Rammstein, Blink-182, and the Backstreet Boys.

Nerf Herder, the band that preceded the Gang, started its set innocently enough by hanging a homemade posterboard-and-marker sign that provided an amusing contrast with the other acts’ grand banners, especially since the group’s name was misspelled “Nerf Heider.” However, soon this nrrrd-rock band unveiled its own sleazy/juvenile side by having a throng of writhing teen girls simulate sex on a fellow named Luke, whom they had plucked from the audience. “Show us your tits” soon became singer Parry Gripp’s constant quote, a curious choice of rallying cries for someone whose lyrics suggest a self-deprecating anti-rock-star stance.

Perhaps a segment of the show during which the Herd (and, Gripp said, the audience as well) sold its souls to Satan explained the group’s boorish behavior. Lucifer arrived in the form of Lüpüs Thünder, the Bloodhound Gang’s guitarist, who delivered the opening riffs to Slayer’s “South of Heaven” before joining Nerf Herder for “Sorry.” Although a few metalheads voiced frequent disapproval, Luke, Lüpüs, and the audience in general seemed to enjoy Nerf Herder’s chaotic set. The Herd seemed to be the true inheritors of the nrrrd-rock mantle, with equal parts Weezer and Bill Gates thrown in for good measure. Lead Herder Gripp looked more like an extra from the film Office Space than the Delta House member his stage demeanor suggested he secretly was. Maybe he was a legacy and the fraternity had to let him in.

Perhaps because of their lack of lewd theatrics, the other two openers, London’s A and Long Beach’s RX Bandits, seemed like an afterthought. Both were solid musically, but their sets weren’t quite as memorable as Nerf Herder’s and the Bloodhound Gang’s. Then again, for better or worse, few are.