Blind Tiger is closing, apparently due to a crazy dispute with its landlord 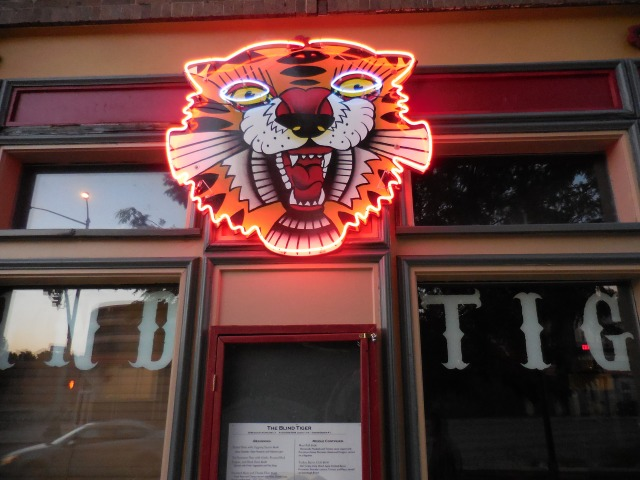 Blind Tiger (3945 Main) is set to close its doors October 31, the bar recently announced on its Facebook page.

It’s unwelcome news for billiards enthusiasts — Blind Tiger was home to four pool tables — not to mention the punk-centric scene that sprouted up around the midtown bar since its August 2015 opening. A makeshift venue in the basement has hosted numerous local punk and rock acts, plus shows by touring bands such as Jacuzzi Boys, A Giant Dog, Ex-Cult and Sheer Mag. As The Pitch wrote a year ago, Blind Tiger has booked “the kind of music typically reserved for house gigs or other DIY spaces that spring up around the city before whatever pushy force — cops, a landlord — shuts them down.”

In this particular case, the trouble appears to be with Blind Tiger’s landlord. The tavern’s Facebook post includes this explanation:

Blind Tiger has been dealing with an unstable landlord who ambushed and shot at the owner. We feel that it is in our best interest to no longer do business with this person. Because of pending criminal charges we cannot go into full detail at this time. We have had a very successful two years, it’s an unfortunate situation.

That landlord is Brent Lambi, a long-volatile presence in the world of Westport real estate. In 2010, The Pitch chronicled Lambi’s turbulent business deals and personal legal problems.

Around the time that he began leasing to Blind Tiger, in 2015, Lambi sold off the Westport holdings he’d purchased in 2007. This included Westport Square — home to Broadway Café, Westport Café & Bar, Beer Kitchen and (now) HopCat, among other businesses — and 501 Westport Road, the building that houses Harry’s Bar & Tables. But Lambi retained ownership of 3945 Main, a few blocks east, at the intersection of Main Street and Westport Road.

It is there that Lambi was arrested on July 31 of this year on counts of aggravated assault, armed criminal action and property damage. According to the Kansas City, Missouri, Police Department’s probable-cause statement (reproduced below), Lambi told police he believed “his parents had been kidnapped” and shot a rifle into the neighborhood on Walnut between 39th and 40th streets (just behind his property) to “get the police to respond.”

Lambi’s rifle was also allegedly aimed at one of his tenants, who fled the scene in a truck and later gave a statement to police. 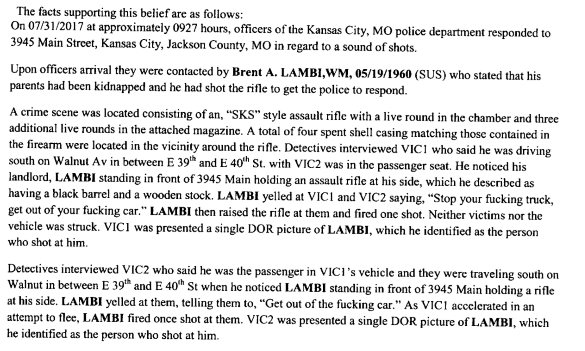 Presumably, given Blind Tiger’s aforementioned Facebook post, the Lambi tenant (“VIC1,” above) interviewed by police is Blake Lostal, owner of Blind Tiger. Lostal says he can’t comment on the matter, for legal reasons. A preliminary hearing in the case is scheduled for November 16.

Civil court records also show that Lambi sued Lostal this past January over a rent dispute. In filings, Lostal has contested the allegations, and that case is ongoing.

Lambi could not be reached for comment, and neither his criminal nor his civil attorneys responded to requests for comment.

Lostal is, however, willing to talk about Blind Tiger. He says there are no immediate plans to reopen the bar in another space.

He likens the process to what RecordBar went through after being booted by its Westport landlord a few years ago. More than a year passed before that venue reopened at its new location in the Crossroads.

“I think what they did was really smart,” Lostal says. “People are like, Find a spot, find a spot. Well, it’s not that easy. Those guys [RecordBar’s owners] did a really good job of transitioning their brand. They took their time and found a proper venue.”

Jason Howland, who managed Blind Tiger from the beginning, moved on earlier this month. He and Lostal are talking about a future project together, Howland says, but they don’t have anything to share yet.

“It was my dream to open a rock-and-roll venue. It was a lot of our dreams,” Howland says. “This was a group effort, and there were some failures and some really big successes. In the end, it’s not going out because of business sales or because nobody was coming in, it’s going out because of issues with our landlord.”

As for the music, Zach Campbell, bartender and one of the show bookers for Blind Tiger, says he’s working to find homes for shows that were already on the calendar for November. (Campbell and co-worker McKayla Edmonds organized Waynez World 3, a punk fest held at Blind Tiger earlier this year.) He says he hopes someplace new will pop up to fill the niche Blind Tiger serviced in the scene.

“We had a better PA than a lot of house spots, but it’s also a small enough room that it appeals to bands who were not quite ready to take on venues like the Riot Room or RecordBar,” Campbell says. “You get 40 to 50 people in that basement, it feels pretty busy. For lots of touring musicians, playing larger rooms on a weekday is not necessarily in your best interest until you get to a certain point. So, I think that’s kind of a unique thing we had. I think KC does need a place like that.