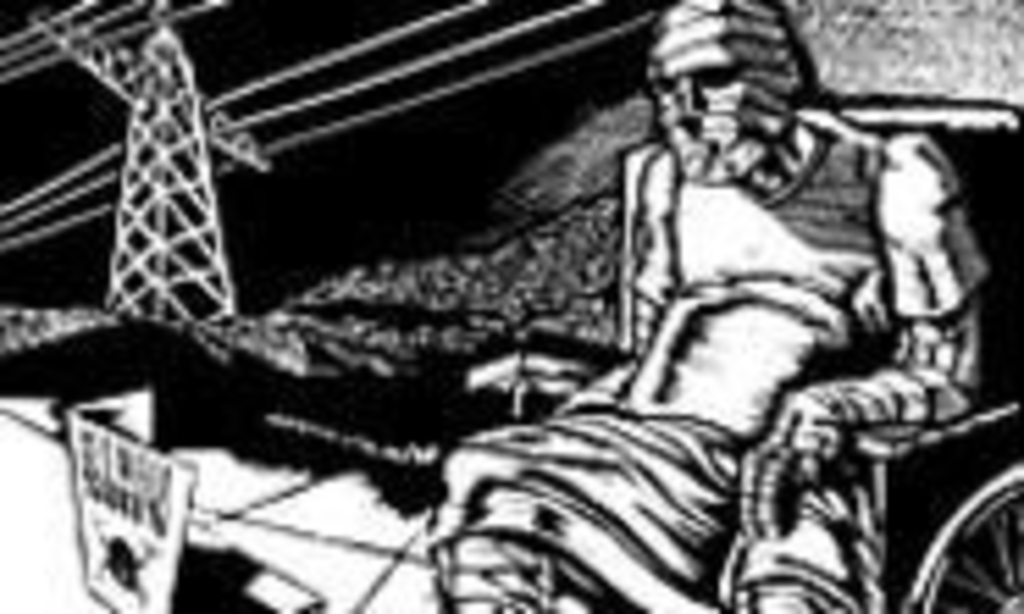 Jason Cuiksa and his boss worked overtime on a dark Kansas prairie on a moonless April night in 1999, scrambling to repair a cherry picker for the Hallmark Hall of Fame production Sarah, Plain & Tall: Winter’s End. Across the road, actors and crew were shooting made-for-TV scenes at an old Kansas farmhouse.

Cuiksa and Kelly Brown figured out that the boom-cart lift — rented by Hallmark to hoist lights above the actors — wouldn’t work because a safety switch had been flipped to the off position. The men quickly fixed the problem and removed a hot wire that someone had installed to bypass the switch.

Brown, a supervisor at D&D Rentals, near Emporia, Kansas, told Cuiksa to climb into the basket to test the machine with a load. The work area was pitch dark. Hallmark had no lights shining in this area. Cuiksa shined a flashlight above the lift to check for hazards and saw none. The film crew hadn’t warned him of any danger.

Cuiksa took the controls and raised himself up in the basket while Brown adjusted the choke below. Suddenly, Brown felt an electrical shock. Looking up, he saw Cuiksa caught in high-voltage power lines. Neither Cuiksa nor Brown nor a Hallmark crew member who was nearby had seen them that night.

Brown grabbed a lever and gritted his teeth as he struggled to bring Cuiksa down while electricity jolted both men.

“As soon as the basket was lowered to the ground, the paramedic that was on site at the movie location immediately went for Jason,” Brown remembered. At first it was too dark to assess Cuiksa’s injuries. The paramedic yelled for help, then dragged Cuiksa to an illuminated area after the crew rotated a light away from the crew.

Cuiksa’s injuries were horrifying, but Hallmark continued filming, eager to wrap up the last movie in a trilogy about a kind and gentle pioneer woman named Sarah, played by Glenn Close. Cuiksa’s right hand had been blown off, and he was missing several fingers on his left hand, but delays cost time and money, so cameras rolled. Half his right ear had been burned off, and bloody skin hung off his neck. Crew members later complained to their bosses, upset at the callousness of continuing to shoot while Cuiksa was lying nearby nearly dead. His right forearm was later amputated, along with part of his left hand.

Cuiksa, who now cannot fully care for himself, sued Hallmark the year after his accident, seeking reimbursement for the costs of treating his injuries — which in Kansas courts cannot exceed $250,000 — as well as punitive damages for creating what the lawsuit calls an unsafe working environment. The case may come to trial next year in U.S. District Court in Kansas. Hallmark is aggressively fighting the lawsuit, alleging in documents that it is Cuiksa himself, along with Brown and D&D Rentals, who was at fault in the accident.

But Hallmark crew members admitted in depositions that they knew the lift was parked under high-voltage power lines and that they had discussed this among themselves but failed to warn Cuiksa about the wires.

Movie production companies generally have a responsibility to provide a safe environment for visitors to the set, said the Hallmark Hall of Fame producer who was in charge of safety on the set, Robert Steinhauer, in a deposition. He said that crew members and visitors should be warned about any electrical power lines on the set.

The safety coordinator for the movie, assistant producer Katy Emde, admitted in a deposition that she never distributed any of the company’s “safety process materials” — which include codes of safety practices, safety bulletins and safety policies. Nor did she ever fill out a safety checklist or any other paperwork regarding safety. Hallmark was never even able to produce documentation of Cuiksa’s accident.

Cuiksa and Brown said in depositions that they received safety training from their company. Brown testified that he had asked Hallmark employee Steve Pape whether there were any hazards in the work area and that Pape had said no. Pape later denied that Brown had asked that question.

The movie became the final installment of a trilogy about the struggles and hardships of 1880s life on the Kansas plains for Sarah and Jacob Witting and their many children. Sarah joins the motherless family in the first movie when she answers the widower Witting’s ad for a bride and, according to Hallmark’s Web site, “takes to the duties of caring for the Witting family with steadfast devotion and earnest compassion.” The third movie, depicting the Wittings’ efforts to get through a severe winter — is a “touching film that teaches us all the value of family.”

Hallmark describes the trilogy as “endearing.” Less endearing is the company’s fight to keep from compensating Cuiksa for his injuries.

Lawyers for the company argue that “[Cuiksa] failed to keep a careful lookout, and negligently lifted himself into the power wires” and that he “failed to notice the power wires.”

Cuiksa should just get a new job, Hallmark suggested in court documents. The severely disabled man “is capable of obtaining a job and pursuing further education,” Hallmark’s lawyers wrote. Still, Hallmark spokeswoman Kristi Ernsting insists, “We have the utmost sympathy for Jason Cuiksa and his family. The accident was a terrible tragedy for them.” Hallmark will not comment on specifics, but Ernsting says, “We have been surprised by some of the claims his attorneys have made, and we will dispute them.”

Cuiksa’s attorneys would not talk to the Pitch for this story (nor would they allow Cuiksa to comment), but in court documents, they scathingly criticize Hallmark for “thwarting” their efforts to gather evidence.

“It is ironic,” wrote Cuiksa attorney John Sheehy, of Minneapolis, “that Hallmark, of all defendants, would attempt to prevent disclosure of information to a badly injured person with Jason’s qualities, when it prides itself as a caring company and specializes in producing cards that express caring feelings and movies that portray persons overcoming personal adversity.”