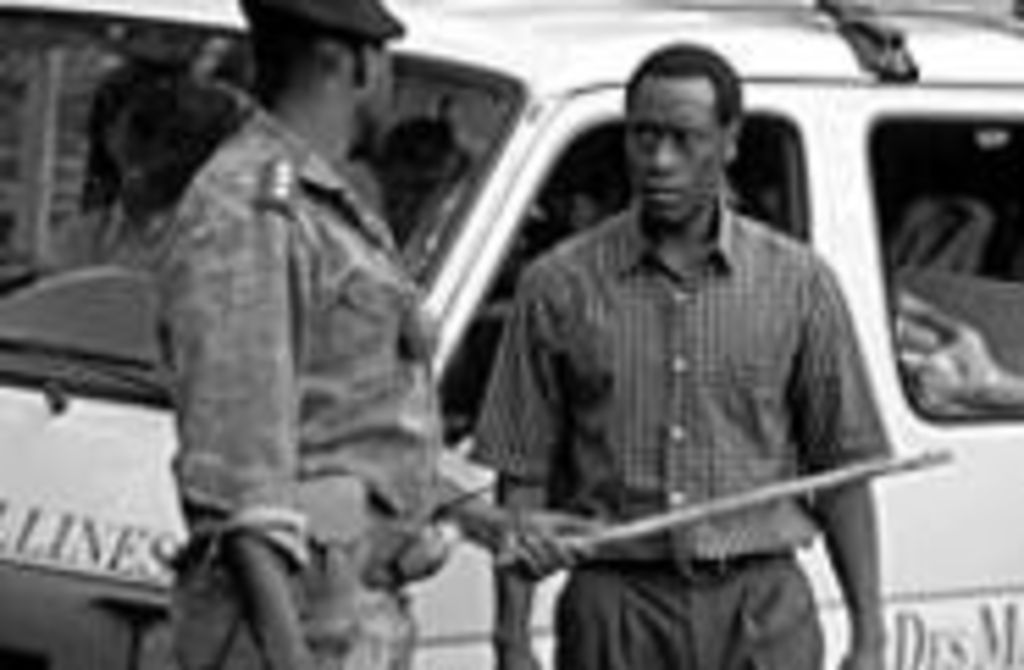 Over a three-month period in 1994, machete-wielding Hutu tribesmen in Rwanda hacked to death 800,000 Tutsi men, women and children. News reports, including film footage of the unfolding carnage, were broadcast around the globe. In the face of such unremitting acts of inhumanity, the world community did nothing.

It wasn’t the first time society had turned a blind eye to genocide, of course. Fifty years earlier, 6 million Jews were “exterminated” by the Nazis. When the war ended, a contrite family of nations vowed, “Never again.” Yet 30 years later, the world stood by while the Khmer Rouge swept across Cambodia, systematically slaughtering 1.7 million people. Then came Rwanda, followed by the “ethnic cleansing” in Bosnia, Serbia and Croatia. Today it’s Sudan, where government-backed Arab militias in the Darfur region seem determined to annihilate the country’s black population. So much for never again.

Hotel Rwanda, the true story of a soft-spoken Hutu hotel manager who risked his own life to save 1,200 Tutsis, may be the most important film released in the past year. Among the class of 2004, it is certainly one of the best. And much of its value comes from the fact that it is targeted at a mainstream audience.

Crass as it may sound, the movie is viewer-friendly. It’s in English, with recognizable American actors in lead roles — Don Cheadle and Nick Nolte chief among them. It lays out its horrific story in a way that is easy for Western audiences to follow.

Paul Rusesabagina (Cheadle) is the house manager at Milles Collines, a Belgian-owned luxury hotel in the Rwandan capital of Kigali. A Hutu, he is married to Tatiana (Sophie Okonedo), who is Tutsi. Historical tensions have long divided the two tribes. Recently there have been rumors circulating that the Hutus, who make up the majority of the population, are planning an uprising against the ruling Tutsis. Paul refuses to believe it.

When the attack does come, the Hutus spare no one. In a barbaric 100-day rampage, they slaughter 800,000 of their countrymen. A contingent of United Nations peacekeeping forces is already stationed in Rwanda, but the Security Council forbids the troops from intervening to stop the bloodshed.

Hundreds of terrified Tutsis seek refuge in Milles Collines, where Paul has been left in charge by his European bosses, who, being white, have been airlifted out of the country. Eventually, some 1,200 traumatized Tutsis and moderate Hutus fill the hotel. Paul houses them, feeds them and repeatedly puts his own life in danger by offering bribes to Hutu rebel leaders to leave the refugees alone. But as Paul’s supply of money and liquor dwindles, so does his ability to negotiate for lives.

Cheadle, always a fine actor, is outstanding here — an almost willfully naive yet uncommonly decent man who sees civilization crashing and burning around him yet who, almost against his own better judgment, refuses to give in to it. One of the most interesting aspects of Paul’s character development is how he slowly begins to realize not only the magnitude of the unfolding tragedy but also the world community’s has abandonment of the Rwandans to their fate.

“You don’t honestly believe that you can kill them all,” he asks a Hutu rebel leader almost rhetorically. “And why not?” replies the stone-faced man. Paul’s faith in the United Nations is shattered first by an American journalist (Joaquin Phoenix) and then by the head of U.N. forces in the region (Nolte), both of whom bitterly explain that the West plans to do nothing to stop the violence.

British director Terry George wisely eschews fancy camera work or editing, allowing the horror and confusion of the real-life events to speak for themselves. And in Cheadle he has found the perfect actor to convey an ordinary man who, trapped inside a waking nightmare, must rely on his own wits and willpower to keep his family safe — and in so doing, save hundreds of families.