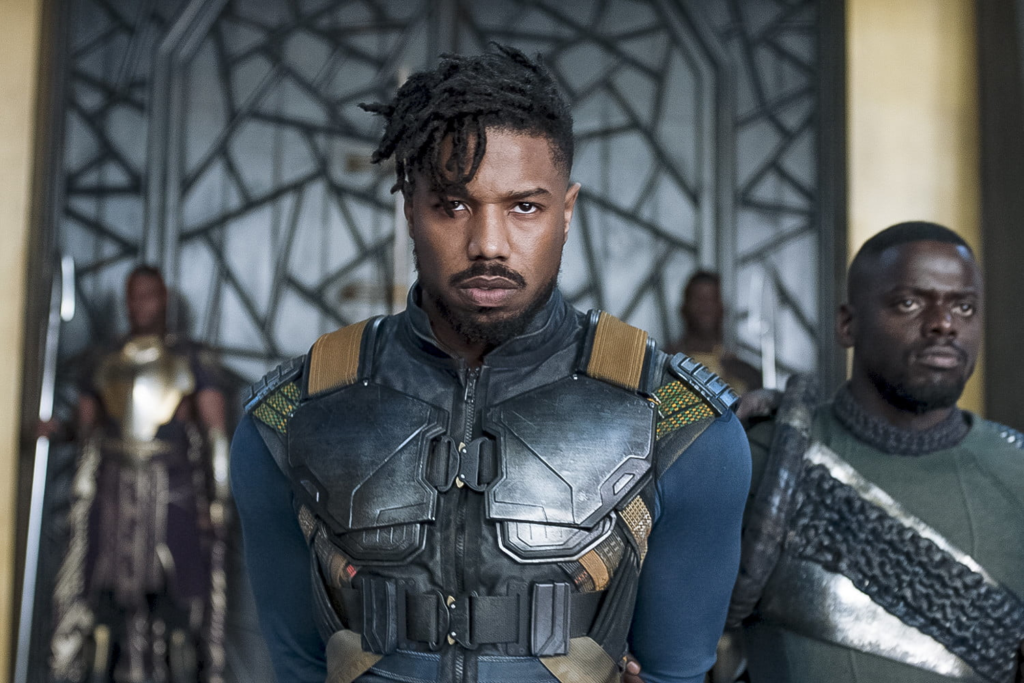 So much of the advance press surrounding Marvel’s Black Panther, the first superhero movie written and directed by a black man and featuring a predominantly black cast, has been about representation. I can count on at least two hands the number of times I’ve read articles that go something like: “After the success of Wonder Woman, Hollywood is finally realizing there’s a market for minorities in this genre too. It’s about time!”

And, yes, these statements are absolutely true. For those with a binary view of movies and why they’re made, the success or failure of any big-budget movie can be measured in its ability to make money. But there’s so much more to Black Panther than a shrewd movie studio finally recognizing the value of an untapped market.

In its setting alone — the fictional African nation of Wakanda — Black Panther removes the “American” from the African-American experience, and liberates its main characters from a shared history of hundreds of years of violent oppression. Wakanda may look like a “shithole” to the rest of the world (or at least our current POTUS), but a cloaking device hides the fact that the county is actually decades beyond anyplace on Earth, with futuristic science and technology and a rich African culture of living in peace. Put simply, Wakandans are smarter and more advanced than anyone else on the planet.

Writer-director Ryan Coogler (Fruitvale Station, Creed) delivers most of this Wakandan mythology in a mysteriously narrated CGI-heavy opening montage that echoes Peter Jackson’s Lord of the Rings movies. A meteorite containing a vibration-absorbing miracle element crashed into Wakanda ages ago, and now He Who Controls The Vibranium Controls the Universe (or something like that). Coogler attempts to give Wakanda as portentous a backstory as LOTR’s Mordor or Dune’s Arrakis, which is a bold move, for sure. But even bolder than that is the director’s insistence on tweaking the typical fantasy origin story by leaving the cozy realm of escapism and instead reflecting modern issues — in a superhero-action movie entertaining way, of course.

On the surface, Black Panther is about Prince T’Challa (Chadwick Boseman), who becomes King after his father’s death (which took place in Captain America: Civil War), holding off a challenge to the throne by an American black-ops soldier nicknamed Killmonger (Michael B. Jordan). But it’s really about the leader of a superpowered country (who also happens to have a literal superpower) steeped in isolationism realizing he has a moral responsibility to move the entire planet forward. It’s the polar opposite of the regressive nationalist political movement we are living through now.

Sounds preachy, maybe? It’s not. Black Panther’s screenplay (by Coogler and Joe Robert Cole) is a natural outgrowth of both its Marvel premise and its desire to integrate the African-American experience so the audience has someone to identify with. In a rare nod to complicated morality, that person happens to be the “bad guy.” Before he was Killmonger, he was Erik, a basketball-playing, outsider kid growing up in Oakland. Erik tragically loses his father at a young age and carries that bitterness as a badge of honor that leads him to T’Challa. Without getting into spoiler territory, it’s enough to say that Killmonger represents a more extreme version of the actual Black Panther Party’s views than does the actual superhero Black Panther. He seethes violent, righteous anger, and wants revenge for reasons personal and institutional, even name-checking slave ships in one jaw-dropping moment.

As in any Marvel film, there are fight scenes, car chases, and flying spaceships, but its Afro-futuristic sense of production and costume design adds a unique dimension to Black Panther, even if some of the action can be as bombastic and hard to follow as many of its predecessors. It’s nice to see traditional African culture informing sci-fi design with absolute confidence.

Also welcome are the film’s heroic female characters and its slyly integrated endorsement of STEM education. Leticia Wright virtually steals the movie as Shuri, T’Challa’s 16-year-old sister, who just happens to be Wakanda’s most brilliant engineer and computer scientist. Think of her as an ornery teenage Q from the Bond series, and you’re on the right track. Wright doesn’t just make science cool for a new generation, she is the very definition of a courageous role model who stands up for what’s right.

Still, Coogler refuses to cater to easy heroics. In the middle of all the subtle cultural inversions and positive messages, we see how easily the seeds of division can be sown not just between citizens, but between friends, allies, and loved ones. Early in the film, as these lines are being drawn, the parallels to our current political climate aren’t quite so clear. But when one character uses fear and hate to divide and conquer, many people fall in line surprisingly easily, succumbing to their own irrational anger. The first post-credits sequence even takes place at a UN conference, and is about as much of a direct response to Trump’s nationalistic rhetoric at last September’s embarrassing UN General Assembly speech as you can get.

So yes, Black Panther represents a long-overdue leap forward in black representation in movies, and it has all the action and fighting and gadgets you’d expect from a Marvel movie. But it also directly engages with the dynamic of what it means to be African vs. African American. The film challenges accepted identities of African-Americans by offering an alternate reality that doesn’t just adhere to fantasy; the line between the “good guy” and the “bad guy” is still very thin. Those outdated conceptions of black and white just don’t apply anymore.