On September 5, the community came together to create Black Lives Matter street murals at six different locations across Kansas City neighborhoods. Less than two weeks after this event, the street mural located at Northwest Briarcliff & North Mulberry Drive was vandalized with white paint and burned rubber.

Harold Smith, the Black artist behind the mural, was not surprised when he heard about the defacement.

He and the volunteers who came together to create the mural on Labor Day weekend were verbally harassed by a number of individuals who passed the site.

“In the very climate that creates a need for a mirror-like that, it’s hard to be surprised or upset by anything,” says Smith.

Crissy Dastrup, one of the core organizers of KC Art on the Block, says, “We all kind of anticipated [it], but it didn’t make it any less infuriating when I learned about it that morning.” However, her anger subsided after talking to Smith and hearing his plan in moving forward.

Smith wanted to bring volunteers back together to help enhance the Briarcliff mural, with the tire tracks and white paint incorporated into the street art. Dastrup and Damian Lair, another leading organizer of the September 5 event, anticipated the turnout would be overwhelming. “Frankly, because the interest and dedication is so strong, we knew that we couldn’t have you know, 1000 people show up to one site to just do a little bit of work. So we just reached out to the people that had worked on that site,” said Lair.

On September 26, volunteers returned to perfect weather at NW Briarcliff & N. Mulberry Dr., the same site they had worked to create the mural just three weeks previously. When the mural was first painted, the day went from rain in the morning to blazing heat in the afternoon. Coming together a second time, there were “more people, better weather,” something that made for a better experience in many ways, said Smith.

Sgt. Jake Becchina, a spokesman for the Kansas City Police Department, said police are not investigating the vandalization at this time.

Upon being asked about what he hopes the community will take away from the enhancements being made out of the vandalization, Harold states, “I have a hope for people that are not cognizant or don’t want to be cognizant of the issue of race in our country, that this would be yet another wake-up call to yesterday’s problem: racial oppression in America.”

He finished the day of coming back together feeling accomplished. “We didn’t get cussed at the day we repaired the mural and added those changes. We didn’t have any interruptions, nobody yelling names at us. So, there’s a good feeling of accomplishment, community. We’ve got some good people.” 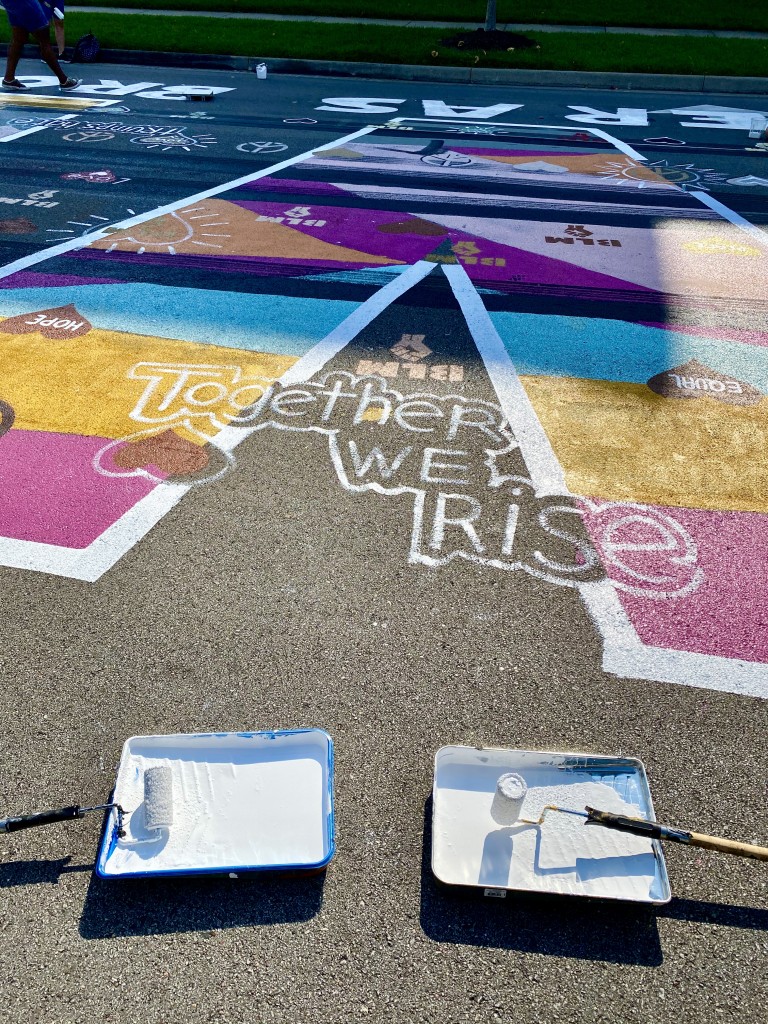 Local creative arts are getting creative