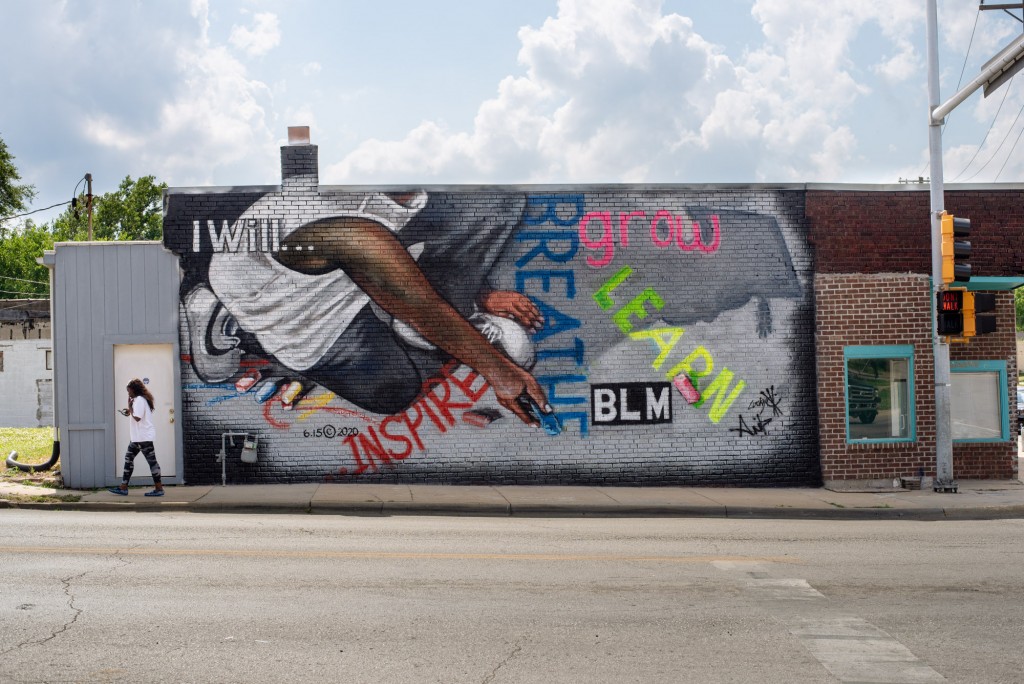 While many were signing petitions, signal-boosting social media, and participating in peaceful protests following the murder of George Floyd, local artist Anita Easterwood and her father Lucky, a local muralist, had a different idea. Setting out into the hot, June sun, Easterwood and her father began (and completed) a mural in support of the Black Lives Matter movement in north Kansas City, Kansas.

The mural features the body of a young Black boy kneeling and writing words on the ground before him. The statements read, “I will inspire. I will grow. I will breathe. I will learn.” They are powerful reminders of the hopes, dreams, and rights of the Black community.

The creative direction of the project focused around positive messages and having a hopeful undertone to it despite the heavy subject matter. One of the most profound choices was for the child to not have a head pictured. “We did that purposefully because we wanted anybody, any young Black kid in that area to be able to resonate with that image,” Easterwood says. Being able to relate to the art and place yourself in it is one of the keys to garnering an emotional response. In addition, there were several allusions made to other popular symbols in the Black Lives Matter movement. The boy kneeling was a nod to Colin Kapernick, and the phrase, “I will breathe,” is the direct opposite of George Floyd’s last words, “I can’t breathe.” These elements strung together are a kaleidoscope of symbols that empower and connect communities. 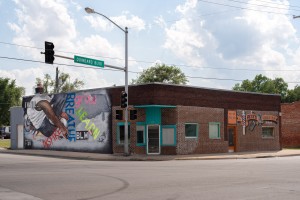 The corner of N. 18th St and Quindaro Blvd. // Photo by Travis Young

One of the most heartwarming elements of this piece of art is the family-driven team that made it happen. The father-daughter collaboration came together naturally, as both Easterwood and her father have a background in art. Primarily working with portraits, this was a new realm for Easterwood and having her father who does portraits as well as murals there to lend his experience was very valuable. The mural itself was Easterwood’s father’s idea and he led Anita through her first large project of the sort.

“It all happened pretty fast,” Easterwood says. Within two hours of her creating a GoFundMe for the materials, the money was raised and Easterwood and her father were ready to begin their work. Within days the owner of the building had given the OK for their wall to be used for the mural, and the project itself only took a week to paint.”It was one heck of a journey,” Easterwood says.

One of the challenges of a project of this nature is that for many of Easterwood’s projects, she works out of her studio in her own home and has the luxury of not showcasing her work until she is satisfied with it. The project is conceived more or less in a vacuum and from there is worked on until it is ready to be shared. With a mural, however, the project is very public from start to finish. Easterwood shares that she received countless questions and commentary from community members during the project about what the end goal was. Creating a project that has social justice elements to it can be more powerful and subject to criticism. When it is a cause that many are invested in, many want to share their vision.

This incredible piece of work has caught the wave of when many members of non-Black communities are waking up to the reality of the discrimination that Black people face in their day-to-day lives. “When you really think about the reasoning of why we’re doing this, it’s enough to make you cry, enough to make you upset,” Easterwood explains.

In addition to the mural itself, Easterwood released an artist statement to drive the point of her project home. This statement, written by Justice Davis, is in harmony with Easterwood’s message.

I hear your prayers at night to God, asking that my skin is not a death sentence written by a world who doesn’t know the purity behind my story line.
Momma, I hear the story lines, the broadcast, I see the protest signs and hashtags.
I know people like me be Black dots on blank page, like targets at a gun range.
I know if I move too quickly at my age, my story could be over, period, like Black dots on blank page.

Momma, I know my melanin be mistaken for sin.
Is that why you ask God for forgiveness for my innocence like I already match a suspects description?
Momma,  I know one day everything I say can and will be used against me like “please, I can’t breathe,” “my stomach hurts” my neck hurts, everything hurts” right before they kill me.
Momma, I promise not to let my smile fade, like the middle of my khakis when my knees play too hard at recess.
I know playgrounds and monkey bars make for easy transition to gated grounds and prisons bars after a court’s recess.

Momma, You don’t have to cry.
I will not let them steal my joy; I’ve hid it behind my fist raised to sky.
I will fly without limit, like my dreams are waiting for me on the other side of the horizon.
Momma, the sun is rising
Like your son is rising.

They will read about my being in history books and no, I won’t be a martyr. I will graduate. I will be a father. I will educate. I will dream. I will grow up I will inspire. I will thrive. I will breathe.”

Local designer and filmmaker Sheppa documented the mural’s progress in this video shared on Instagram. Watch it below or here.