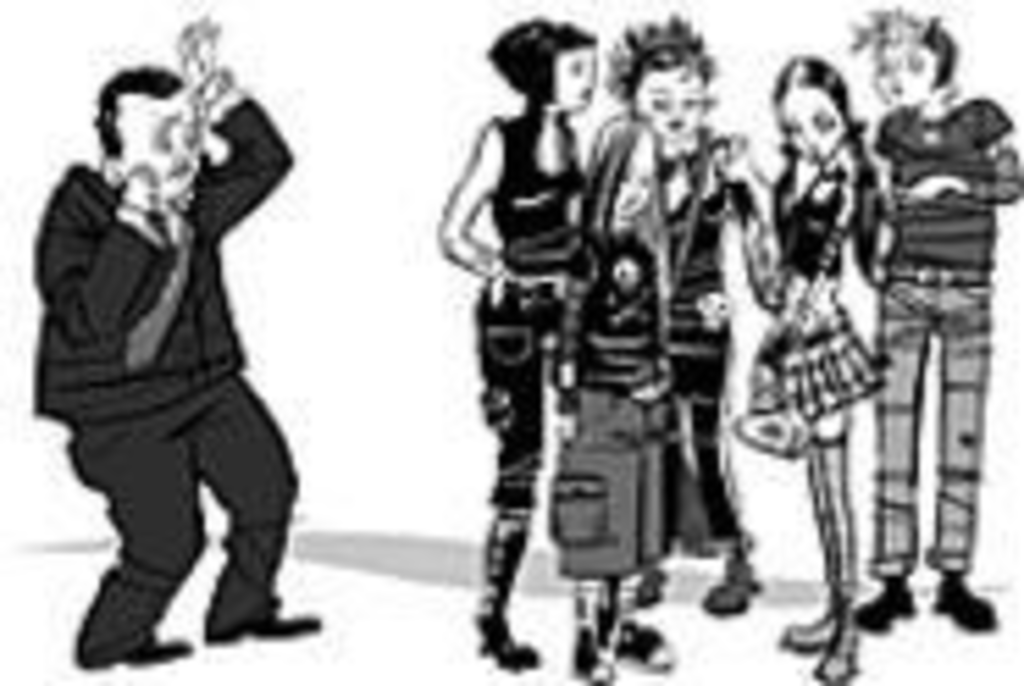 In the winter of 2002, with the federal budget stretched thin, President George W. Bush asked Congress to give back money that lawmakers had earmarked for local projects so it could be used instead to fund the Pell grant program, which helps needy students pay for college. One of the local projects that had drawn particularly harsh scrutiny was a $273,000 federal grant that U.S. Rep. Sam Graves had procured to study goth culture in Blue Springs, Missouri. “It’s one of those priorities that my constituents asked me to fight for,” Graves told an Associated Press reporter at the time.

Congress refused to return the money, and that spring the watchdog group Citizens Against Government Waste singled out the goth grant as one of the worst examples of pork-barrel spending its staff had encountered as it filtered through thousands for its 2002 Pig Book. Soon, media across the nation were mocking the grant, with editorials suggesting, among other things, that the federal government could save a lot of money by simply buying goth kids bright clothes and happy music.

But Graves and officials from the Youth Outreach Unit (an office run by the city of Blue Springs and its police department), which had requested the grant, responded that goth culture posed a serious threat to Blue Springs. “It is my hope that this funding will give the officers in the Youth Outreach Unit the tools they need to identify goth culture leaders that are preying on our kids,” Graves stated in a press release. And Blue Springs Youth Outreach Unit officer Colby Lalli hinted to the AP reporter that goth killers were roaming the streets in Blue Springs. “It’s not just the clothes they wear. We’re seeing kids on the unit, whether it be suicide or homicide, they’re just one more culture in our community that is at big risk, and we need to deal with that,” Lalli said.

“About 35 students have been identified with the goth culture,” a Graves spokesman told the Ledger-Enquirer newspaper in Columbus, Georgia. “They’re doing self-mutilation, animal sacrifices, the sort of violent behavior and drug use that possibly could lead up to what happened at Columbine in 1999 with Dylan Klebold and Eric Harris.”

Now, after spending more than a year and $132,000 in taxpayer money on salaries and “fringe benefits,” Blue Springs Youth Outreach Unit staffers admit that many of the claims they made in their grant proposal are simply untrue, and they have failed to complete two of their three original goals. (The remaining money has been returned to the federal government.)

In the 2002 proposal, then-director P.J. Petrillo and her YOU staffers wrote, “The City of Blue Springs and surrounding communities have recently been bombarded by the gothic culture, which is a youth movement in the United States that can cause youth to engage in self-harmful and destructive behaviors. You have probably seen youth involved in this movement and were unaware of how organized and dangerous it can be for them.”

The proposal described possible goth behavior to watch for — from kids overplucking or penciling in their eyebrows to drinking blood from “themselves or any willing donors.”

Things didn’t look good for Blue Springs. “After we became aware of the youth in Blue Springs engaging in gothic practices, we hired a professional in this field to come in and assess our community volatility to help us determine our next course of action,” the proposal reported. “The outcome was staggering.” Goth culture in Blue Springs was an “ongoing and ever increasing problem,” the proposal continued. Through educational efforts, Petrillo promised, “we will save lives of young people and potentially save the lives of the innocent in our community.”

The pleas got the attention of Graves, who was willing to put up a quarter of a million dollars to avert doom. But now, Blue Springs officials say they didn’t get much done, simply because there was no problem in the first place.

YOU hired Allyce Ford as grant coordinator in the spring of 2003 and gave her a year to complete the project.

This summer, Ford will send a report to the U.S. Department of Education. In a draft of the report, Ford explains YOU’s problems meeting its objectives by noting that “there have been no recent reports of youth involved in goth or counterculture activities in our area.”

YOU originally proposed using grant money to accomplish three things: training staff from schools and youth service agencies, hosting town-hall meetings and providing intensive therapy to goth kids. When the grant expired in April, staffers had accomplished only one of those goals — the training. But instead of the sixty sessions promised in the proposal, YOU had held only 15, Ford writes in her draft report.

YOU held its first training session in July 2003 for fifty law enforcement officers and school staff members. They listened to a presentation by Tony Kail, director of the Center for Study of Deviant Movements in Jackson, Tennessee, and an expert in “cults, sects and domestic terrorists.”

The following month, YOU brought in Don Rimer, the Virginia Beach, Virginia, Police Department’s expert on vampires and the occult, to talk to sixty more police and school officials. In the mid-’90s, Rimer arrested a Virginia teenager who claimed to be a vampire. “That should be a lesson to all the kids who have an interest in the gothic side of things,” he told the Virginian-Pilot at the time.

YOU’s staff also spent its time consulting by e-mail and phone with other experts. The contact list included Alicia Porter of Salt Lake City, Utah, who runs the Web site Gothic subculture.com, and Walt Mueller, who runs the Center for Parent/Youth Understanding in Pennsylvania. Mueller’s group is dedicated to “equipping parents and teens to respond to challenges through a distinctly Christian world and life view” and to giving them “Biblical answers and positive direction they so desperately need,” according to its Web site.

YOU said it would conduct three town-hall meetings but held none. Ford explains that starting in December 2003, her staff telephoned local educators, church and community officials to ask if they would be interested in attending.

“We didn’t get a real good response,” Ford tells the Pitch. She says she was going to schedule a town-hall meeting anyway, but the date she chose in January of this year conflicted with some Blue Springs zoning meetings, so she gave up. “We said, ‘This just does not appear to be something people want to come to a town-hall meeting for,'” Ford says.

Even the decision midway through the project to broaden YOU’s focus from goth culture to “counterculture,” which YOU supervisor Jim Snyder, a Blue Springs Police Department captain, defines as “uncommon variants to normal lifestyles,” didn’t help net any troubled kids who needed federally funded help. “What we found,” Ford tells the Pitch, “was that there are hardly even any kids in the Blue Springs area that could really even be termed counterculture.”

YOU had planned to provide counseling for 100 youth — from an initial assessment to eight weeks of repeat therapy sessions and follow-up — at a projected total cost of $118,000. “Psychological testing will be provided to youth that we feel are dangerously immersed in the gothic culture,” the proposal promised. The problem was, school nurses and counselors didn’t refer any kids for counseling.

(One brooding teen appears to have narrowly escaped referral. Ford’s report draft states that “the parents did not want this kind of problem on the child’s record, and since the student was not posing a problem for anyone but himself, the counselor did not feel compelled to make a referral.”)

Instead, the draft report shows that $54,000 was spent on salaries for Ford and her secretary, whose duties included buying furniture and equipment to set up their office; doing research “utilizing the Internet, library, Barnes & Noble bookstore, A-to-Z Comics, Spencer Gifts and Hot Topics”; interviewing police and school personnel; poring over police and school reports for any instances of goth-related criminal activities (they found none); and creating checklists and a brochure about goths.

The money also paid for Lalli and Snyder’s trip to Washington, D.C., to meet with the U.S. Department of Education coordinator in February 2003; a trip for staff to Columbia, Missouri, in April 2003 for a conference on satanic cults; a trip for Ford to Washington, D.C., to attend the Office of Safe and Drug-Free Schools conference in October 2003; and a trip for staffers to make a presentation to the school counselors in Lake of the Ozarks in November 2003.

When YOU submitted its proposal, its staffers imagined that the project would serve as an example for other communities. “The national significance of this project is monumental!” one employee wrote. “Easily this project could become a national model for youth-based crime reduction initiatives, to protect communities against youth violence and catastrophic events.”

So far, though, YOU hasn’t applied for grant money to hire someone to sit by the phone and wait for other cities’ calls.

Snyder says the project was a success anyway. Ford is staying with YOU to work on another project: administering a grant from the Missouri Department of Mental Health to tackle the problem of underage drinking. Also, she says she is “donating” her time to speak to the media about the goth grant. “I just didn’t anticipate so many people would be interested in this thing once it was all over,” she says.

And Snyder tells the Pitch that the city of Blue Springs has provided a service by educating the public about “counterculture” youth.

The lesson? “Just don’t be shocked if you see one,” Snyder says. “If you see somebody dressed in all black, it doesn’t mean they’re going to harm you. It’s just a fad they’re going through.”